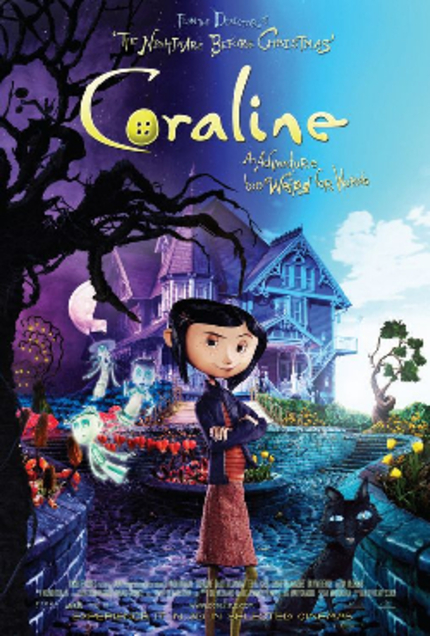 Happily and firmly planted in middle-aged bachelorhood with no children of my own, I'm the last person you should trust when it comes to recommending movies for kids, but I wish Coraline was the first movie I saw in a real live cinema, rather than Bambi.

Both movies have mother issues, yet it's Coraline that feels more true and authentic to my pre-teen years.

Somewhere between a gorgeous kid flick and a European arthouse picture, Coraline, which opens tomorrow in the US on more than 1,000 screens in 3-D (and another 1,000 in 2-D), is not terribly interested in narrative storytelling. Like its intensely curious title character, the latest fantasy from Henry Selick (The Nightmare Before Christmas, James and the Giant Peach) is much more apt to be distracted by the playful creatures and constantly-changing landscapes of the dreamy, sometimes surreal world it inhabits than anything so mundane as real-world concerns or episodes that move the plot forward rather than sideways.

That makes Coraline immensely appealing as a clear-eyed, almost entirely safe fairy tale, as long as you're not in any kind of a hurry. Whatever Coraline lacks in dramatic tension, it more than makes up for with its richly observed atmosphere, filled with small, delightful details and recognizably child-like behavior. The side trips that it takes are spent on eccentric characters and ultimately pay off in the grander scheme of things.

As a 3-D movie, it's far more restrained that I would have anticipated. Just a few days before the advance screening, I caught up with My Bloody Valentine in 3-D, and agree completely with what Rodney Perkins wrote in his capsule review for ScreenAnarchy: "The 3-D in this otherwise middle of the road film is so well-done and applied in such an over the top fashion as to singularly elevate the film into a solid piece of event entertainment."

Coraline takes quite a different road. Rather than concentrate on amping up an otherwise middling picture with regular jolts of "gotcha" effects, Selick uses 3-D to deepen the experience and try and convey the sense of wonder involved in the film's storybook world. Yes, there are several moments when objects fly off the screen, seemingly into the viewer's face, but these are kept to a minimum.

It's perhaps an odd combination to have stop-motion animated in 3-D, but it looks splendid, and aficionados of stop-motion will have a field day. The press notes inform that two years were taken in pre-production and shooting took another 18 months.

Oh, yes, the plot. (See, I'm easily distracted, just like the movie.) Coraline (Dakota Fanning) is bored. Her mother (Teri Hatcher) and father (John Hodgman) have recently moved the family to a run-down apartment in the rurals, and Coraline is running out of things to do while her parents are fully-occupied writing and editing a garden supply catalog. The only other kid around is Wybie Lovat (Robert Bailey Jr.), a too-talkative boy -- ** ick! ** -- and the neighbors are kinda weird, whether you're talking about the spinster sisters / former entertainers Miss Spink (Jennifer Saunders) and Miss Forcible (Dawn French) or the acrobatically-inclined Mr. Bobinsky (Ian McShane).

Coraline discovers a small, locked trap door in the living room wall that opens up to nothing but bricks. But one night she unlocks the door, climbs through a weird passage, and emerges in an alternate version of her apartment, her mother, her father, and even the wandering cat -- who talks! (Keith David) In the alternate world, her parents have time for her, everything is just perfect, exactly as she dreamed it should be. Except for one odd thing: her Other Mother has buttons for eyes, and suggests softly yet strongly that Coraline can stay forever in the wonderful, alternate, perfect world ... as long as she too replaces her eyes with buttons.

Coraline may be dreamy and distracted, but she's not stupid, and it becomes a battle between good and evil, real life and the fantasy world of a child.

The voice acting is quite good. I didn't check the casting before the screening, so the only voices I recognized were the rich, charming, and deep vocals of Keith David and Ian McShane. Teri Hatcher handles her voice work with aplomb, as does Dakota Fanning and John Hodgman (forever known, I suppose, as the "PC Guy" in those "Apple vs. PC" TV commercials).

Coraline (the movie as well as the character) is never in much of a rush, even when in serious danger, and that could be a dividing point. The total running time clocks in at 100 minutes, and the pace admittedly dawdles. For me, that was part of the charm. For you and your children, it might be a different story, though it's hard to imagine little ones who endlessly watch the same movie over and over again -- back to back to back, at that -- would be bored by Coraline.

As a further reference point, the film is more James and the Giant Peach than The Nightmare Before Christmas.

Lastly, I should acknowledge that I've avoided mentioning Neil Gaiman's book that serves as the source material for the film because I've never read it (for shame!), so I have no idea if it lives up to expectations on that score. Feel free to add your informed opinions in the comments section.