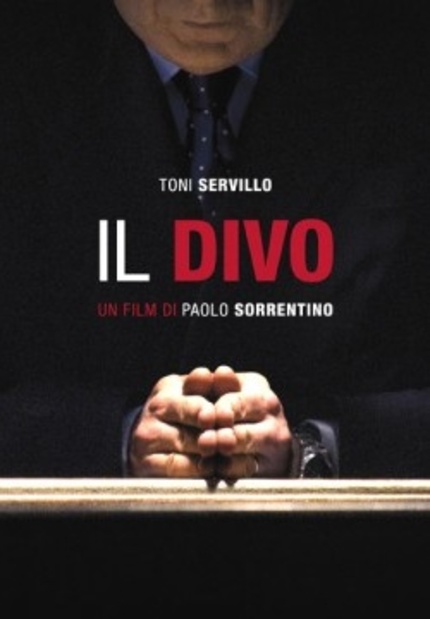 It's a biopic about the famous Italian politician Giulio Andreotti, 19 times Minister and 7 times even Prime Minister of Italy.

So what do you expect? A Milos Forman-esque chronological travel through the life of this person, highlighting historical moments and character traits in such a way that you leave the cinema with a definite (if subjective) view of him? A normal rise-and-fall so to speak?

For Sorrentino has no intention to lift all the veils around this enigmatic statesman. Instead he shows these veils exist, jumping back and forth through time, and brings what few explanations there are with breakneck speed.

The end result may be hard to follow for anyone who is not an expert on the Italian political scene of the last thirty years, but this movie cleverly manages to be hugely entertaining even for those baffled viewers who, storywise, feel like they were just shoved forcefully into the woods.

More after the break!

In 1991 Giulio Andreotti starts his 7th term as Prime Minister of Italy. He is a deformed little man suffering from migraines and according to doctors should have been dead for over 50 years. Yet people fear him for his power and connections, and respect him for his dry wit and political acumen.

Nicknamed "Il Divo" after Julius Ceasar, he seems to have an uncanny knowledge of, well... everything!

But politics in Italy are never less than volatile, and Andreotti has to fight harder and harder against allegations of having been liaised with the mafia. A sudden new string of suspicious suicides and murders seem connected to several other deaths in the late seventies and early eighties, most notably the one of fellow party member Aldo Moro, kidnapped and killed by the terrorist organization called "The Red Brigades".
And even Andreotti with all his power seems unable to escape being mentioned as a key factor in this affair...

As mentioned above, I was unprepared for the form in which Sorrentino presents his biopic. Starting quiet with some explaining slides and quotes from Andreotti, it suddenly explodes in a string of murders filmed in a fast and flashy way seemingly aimed straight at Quentin Tarantino.

Before you can catch your breath you get introduced to the members of Andreotti's inner circle, and though this may sound boring it isn't. For Paolo Sorrentini brings out a huge bag of visual tricks, and throws everything but the kitchen sink at you to keep your glued to the screen. Even if it takes showing some huge-boobed models bouncing around in slow-motion, he'll do it. Names, functions and nicknames fly through your field of vision as 3D-text, reminiscent of the opening titles of Fincher's "Panic Room" (only this time the letters are bright red, of course).

The only thing that dazzles more will be the brain of a non-Italian viewer who desperately tries to keep up with what is being told, only to discover that this is futile. For many of the events turn out to be shown out of order on purpose, but return later at a more leisurely pace. Who is this? What is that? Who is that old woman, crying?
Sorrentini keeps doing this throughout the first half, throwing in little snippets of film which make no sense at that time. It makes the movie all the more rewarding later on when the puzzle gets explained and these pieces fall into place.

If I make it sound like this film may be a little too clever for its own good, it is because... it is. There is so much glamor and flashiness here that at times it seems inappropriate, like the director is saying: "Look! Look!". But at the same time it makes the movie an absolute delight to watch. Few people can do windowdressing like the Italians, and Paolo makes sure that every single frame of his movie contains something worth seeing.

Underneath all that glitter there is, thankfully, a strong core in the script and the performances. Andreotti's inner circle has been painstakingly recreated in detail, with actors who sometimes look uncannily like the real thing. Flavio Bucci as Andreotti's right hand Franco Evangelisti looks so realistic that you'd want to check if the original person really died in 1993! (Oops, spoiler?)

Actually, least looking like the actual person in the movie is Toni Servillo as Andreotti himself. That is not his fault, for his voice and mannerisms are nearly perfect. But he is a healthy man of normal build, not a spider-armed hunchback. No matter how much they fold his ears sideways, Servillo just doesn't much resemble Andreotti, neither in body (thankfully!) nor in face.
And the funny thing is: it matters not one bit. Servillo is mesmerizing in the role, earning all the awards he got for it.

And although it must have been tempting to portray Andreotti as a master criminal, Sorrentino shows him in a critical, yet not unsympathetic light. He shows plenty of the sense of humor Andreotti was famous for, and the man's organizational skills.
As for his criminal involvement, lets face it: if you were part of leading the workforce rebuilding Italy after the Second World War, was it realistically possible to do so without cooperating with the mafia?

Or, wording it differently, was it realistically possible to do so without getting the mafia to cooperate?

As the end of the movie nears, the viewer is in two minds whether or not this person should be sent to jail or not, and that's exactly where Paolo Sorrentino wants you to be. The real Giulio Andreotti has gone on record saying he doesn't like this movie and feels he is being misrepresented. He can hardly say otherwise, as there are one or two confessional speeches in the film which, if true, would ruffle quite some feathers.
But if the movie paints a realistic picture of Andreotti, I wouldn't be surprised if his objections are fake. In fact, he might be behind this film, hidden somewhere seven layers behind the producers.

As one Italian comedian says in the film: "After Andreotti is dead they'll cut the black box out of his hump and we'll finally know the truth!".

Sumptuous filmmaking at its most flashiest, "Il Divo" may distance some people but I found it to be riveting. I am not an expert on contemporary Italy but I never got bored, and director Paolo Sorrentini makes sure that you will understand just enough to keep enjoying yourself.

Add to that some very strong performances by a great cast, first and foremost Toni Servillo as the big little man himself.