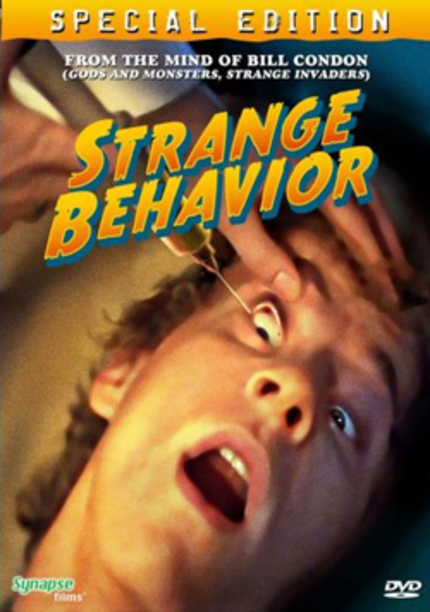 Australian's brief flare as a movie-superpower has been nicely described in the documentary "Not Quite Hollywood", and there seems to be an increase in the amount of attention being paid to the titles mentioned in that film.
Take distributor Synapse, whose "new releases" page (at the moment I write this) only features vintage Australian thrillers.

This is not a bad thing, as these films range from peculiar to guilty pleasure, and there are even to be found some hidden gems in there as well. So today I review Synapse's release of Michael Laughlin's "Strange Behavior", a genre mash-up thriller which technically speaking should be called an eighties' slasher.
Yes, it's teen-butchering time once again.

But although it features one of the nastiest (and off-putting) DVD-covers I've recently seen, "Strange Behavior" is not the gory shocker Synapse's marketing department tries to sell it as. Instead it uses a storyline not too different from what you'd expect Michael Crichton to come up with, and throughout the movie you'll sense a strong fifties', sixties' and seventies' science fiction vibe.

Is it any good though? Well...
More after the break!

In a sleepy American town a couple of extremely violent murders take place. When the forensic evidence bafflingly points to each seperate murder having a different perpetrator, sheriff Brady thinks these events may be linked to the death of his wife years earlier.

Meanwhile his son Pete is about to graduate from high school and tries to raise some extra money for enlisting into college. His friend knows a quick and easy way: by presenting yourself as a guinea pig for some experiments in behavioral sciences you can earn a couple of hundred dollars in only two days! Pete agrees but the experiments turn out a bit different than expected, especially when drugs start being administered in a way which eh... might make your eyes water a bit.

Could there be a link between the experiments and the murders, them being in the same movie and all?

An Australian production shot in New Zealand, "Strange Behavior" (or "Dead Kids" as it was called in Australia) sets itself apart from other slashers in more ways than one. First, instead of the usual obnoxious group out to score as much sex and drugs as possible, the teens depicted here are actually nice people. What happens to them (and their parents) is a crying shame and not shown as particularly entertaining.
Second, children aren't safe in the least: whatever is murdering these kids isn't caring about them being kids. The victims include a girl who is thirteen and, in a very shocking sequence, a boy of eleven who gets his hands cut off at the wrists.

But the most important thing is that there is a plot here, and a fairly intricate one too. Without wanting to spoil too much, once the second half gets going you are treated to a major subplot happening in the past and a villain who seems to have walked straight out of a James Bond movie. It all resolves nicely, with the HOW and WHEN of the murders falling into place, but take a closer look at the WHY of the murders and things fall apart a little. Genius villain or not, the "plan" shown here is a very complicated way to accomplish something that might have been done a lot easier... if it needed to be done at all, which you might argue.

Acting wavers between good and awful which gives the proceedings a very artificial sheen. Standout (in a good way) here is Dan Shor who I only knew as Ram from "Tron" and hardly recognized. The father-son releationship between Michael Murphy's character and him, shown as a sort-of marriage in itself, is an odd but believable setup. This helps a lot to give the finale an extra emotional charge, again something in which this film distinguishes itself from other slashers.

As for gore, there isn't too much of it although there are some bits that are uncomfortable to watch if you can't stand any blood. The movie doesn't exactly shy away from it but doesn't go for the jugular either. The bodycount is relatively low in the first place and more is implied than actually visible, with the first murder even shown only as a silly shadow-play.

Director Michael Laughlin and writer Bill Condon (of "Dreamgirls", "Chicago" and "Gods & Monsters" fame) have crafted a nice thriller, with many clever references to crazy scientist movies from the fifties.
But some things date it in a way which was NOT on purpose though: the soundtrack by "Tangerine Dream" is... need I continue?

At the very least "Strange Behavior" is a nice guilty pleasure, but sometimes it's considerably better than that. Definitely recommended for fans of slashers and science fiction, and if there had been any female nudity in there I would have added giallo fans as well but alas...

In short this is a fine disc, and fans of the movie should check it out if they haven't got any of the previous DVD-releases yet. It's also region-free which I wish all distributors would do, especially in this time and age.

I actually only have three negative comments on it, and the first one is this:
OK Synapse, what's up with that cover? Trying to gross me out or what?
Not only does the yucky image misrepresent the movie, it actually takes a bit of the sting out of one of the most uncomfortable scenes in the movie. When I saw the actual scene the image is based on, I was like "Ooof, that was nasty, but thankfully not as nasty as that cover implied".

The second negative comment is about the transfer, which is very soft. Even Synapse's other Ozploitation titles look considerably sharper than this one. Note: I've seen other editions which were even less sharp, so maybe I shouldn't be giving Synapse a hard time over this.

Third negative comment: no subtitles at all. I hate that, because English is not my first language and I often have to repeat parts to try and make out what people are saying. With all the technical possibilities DVD as a medium has, it's always disturbing to see distributors not using them.
And Synapse, it's not just me who needs subs, you're basically letting all Hard-of-Hearing people down. Not nice!

But before I sound too grumpy, there are a lot of nice things to say about this disc as well, and thankfully this outweighs the bad:

Colors are OK and this is a movie which needs to be seen in widescreen, so it's good to see it presented here in full 2,35:1 ratio.
The soundtrack is the original mono, which I applaud. It seems to wobble a bit near the end, but maybe I'm mistaken and it's just the "Tangerine Dream" soundtrack that causes this effect.
Speaking of them: the score can be played as a separate soundtrack which is the sort of extra I really like (even though I'm not, as you may have gathered by now, a big fan of "Tangerine Dream"...).

Where this disc shines is in the extras though.

The best thing here is a commentary track with writer Bill Condon, star Dan Shor and star Dey Young who plays Pete's girlfriend. It's a nice nostalgic track, with all participators accepting the movie for what it is and acknowledging both the good and bad bits, while reminiscing about the fun time together.
The trailer gallery consists of the American trailer for "Strange Behavior", the Australian trailer for "Dead Kids", and trailers for "Dark Forces", "Synergor" and "Patrick".
Next is a photo gallery, which I'd normally consider to be useless filler but this one includes promotional material like the lobby cards, and that changes my opinion. Nice!
Extensive filmographies are also included, but those I DO consider filler (then again, I own a PC...).


Conclusion about the DVD:

Synapse's regionfree Special Edition of "Strange Behavior" suffers from a soft transfer (and the lack of subs), but as there isn't a better one around you shouldn't dismiss this disc if you're a fan of the film. A nice set of extras make this a fine package indeed.

You can order this edition through our affiliate.