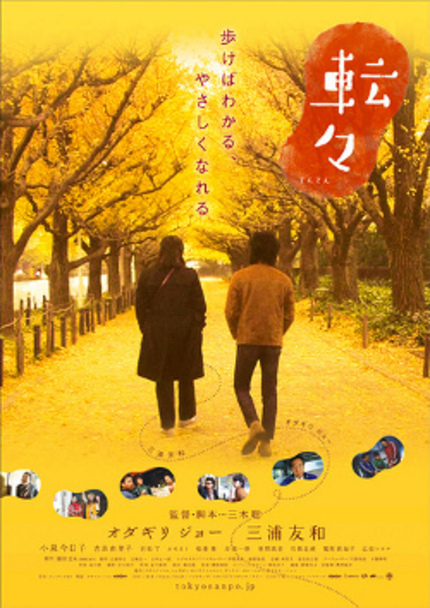 Takemura [Joe Odagiri] is in a bit of a funk. He is in his eighth year of university studying law. He has no personal connections to anyone, not even his parents. And he has somehow found himself oweing a debt of 800,000 yen. He is rudely reminded of this debt that is owed when the collector, Fukuhara [Miura Tomokazu], busts into his hole in the wall apartment, puts him into a choke hold, and shoves one of his own socks into Takemura's mouth. The deadline has been set. Takemura has three days to pay off this debt or face the consequences.

Adrift in Tokyo is the closing night film of the Reel Asian Film Festival on Sunday, November 16th, 8:30pm at The Bloor.

Fukuhara returns two days later and makes Takemura an offer. If Takemura goes on a walk with Fukuhara across Tokyo he will give Takemura 1 million yen at the end. There is no set course. There is no limit on time. Over the course of their trip he takes Takemura to places in the city that he has a special connection to. You see, Fukuhara has just killed his wife and he is going to give himself up before the body is found. The sentence will be lighter if you give yourself in before the murder has been discovered. But Fukuhara doesn't want to give himself in to one of the local offices. He plans to surrender at the nicest precinct deep in the city. And so they begin their trek into the heart of the city.

During the trip this odd pairing of lost souls will encounter many colorful characters and situations of circumstance. Even the city of Tokyo itself is as much a character in this film as Satoshi chooses interesting backdrops for his scenery and makes the most of the Autumn season as the colorful leaves drench the sidewalks in bright colors. Yes, Miki Satoshi has created a simple visual treat. But it is not the visuals that make Adrift in Tokyo work so well. It is the tightness and great writing of his script that makes this movie such a charming film.

There is an acronym out there, KISS, which everyone should know stands for 'Keep It Simple Stupid'. Satoshi's script, nor is he, at all stupid but he gets that simple part down very well. This is a film about two guys walking across the city opening up to each other, sharing stories and getting into the odd misadventure from time to time. Fukuhara's seemingly odd connections to odder people in the city don't serve much as a warning to Takemura about opening up to people but show him that these relationships can exist and life can go on. And while these moments in the film are used for comic effect the comedy is excellent in the film and it doesn't feel like Satoshi is reaching into a bag of tricks or exhausting his supply of material. Every joke and gag is well timed; the execution of the jokes are just as important as the punchline.

In the time it takes Fukuhara and Takemura to make the trip to the desired precinct Takemura doesn't so much make a connection to a place but realizes the importance of relationships and friendships and the person who thought he had no one finds himself attached to this debt collector. It's just too bad that he's going to surrender himself to the authorities. Adrift in Tokyo is an absolute delight!