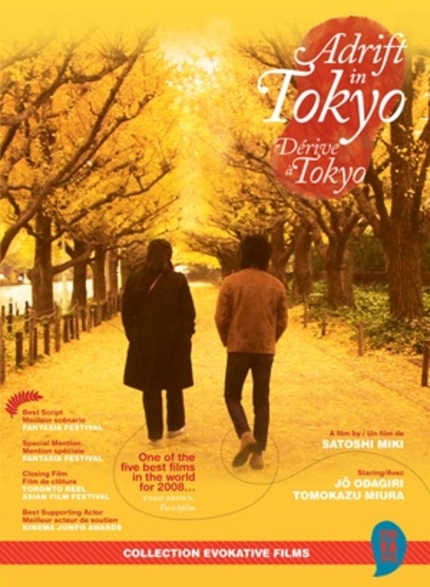 Miki Satoshi's much-loved Adrift In Tokyo hits DVD December 22nd, a release notable - at least here in my house - not only because the film is fabulous (which it is) but also because this edition from Canada's Evokative Films also happens to feature liner notes written by yours truly, my first stab at doing such a thing.

And to celebrate the release, Evokative is doing two things.  First, they're offering a 5% discount - in addition to any existing sales and offers - to ScreenAnarchy readers on anything ordered from the Evokative web store before December 16th.  To get your discount, just enter the code Twitch5 on checkout.  And, second, they're offering up five copies of the film to give away to you, the loyal ScreenAnarchy readership.  To win, all you have to do is answer this question:

Who composed the score for Adrift In Tokyo and which additional Miki Satoshi films did he also fill this role on?

Email your answer to me here!  Winners will be drawn at random Monday, December 14th.  Those who include their mailing addresses in their entries stand a better chance of having their prize arrive before Christmas.  There's a fighting chance you'll find the answer to the question somewhere on the Evokative website.