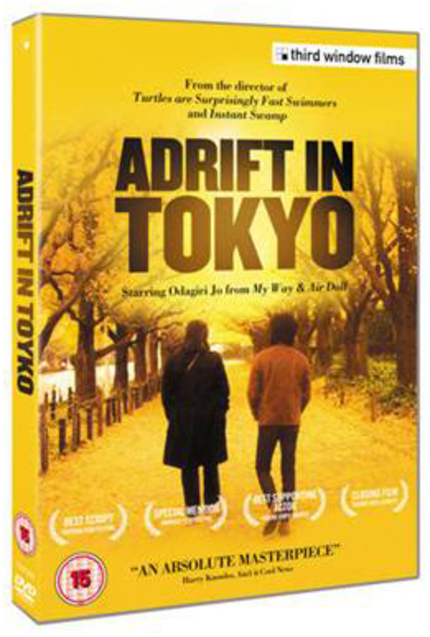 Third Window's latest release, Adrift in Tokyo, is coming to DVD on February 27th.This is their third Miki Satoshi film, and one that hasn't been released on US DVD, though it is available in Canada. In celebration of this release, Third Window are also compiling their first box set, the Miki Satoshi Collection, featuring Adrift in Tokyo, Turtles are Surprisingly Fast Swimmers, and Instant Swamp. The two older features are fantastic, and I can't wait to check out Adrift.  The box set is on sale for a ridiculously low price at Amazon right now, so if you don't have the other two films, you'll want to get in on the deal before that price goes up!  Here are the details for Adrift in Tokyo:

Leading a lazy life, Fumiya has been a university student for 8 years and owes money to loan sharks. One day, a man named Fukuhara comes to collect the loan, which Fumiya cannot pay. So Fukuhara makes a proposition: He will cancel the debt as long as Fumiya agrees to walk with him across Tokyo to the police station of Kasumigaseki, where he intends to turn himself in for a crime he deeply regrets. Not having much choice, Fumiya accepts the deal. Thus begins their journey which will lead them to various unusual encounters, most of all with themselves. Based on the original novel by Naoki Prize winner Yoshinaga Fujita comes a fascinating, humorous and wildly clever film that is sure to charm you.

Pre-order Adrift in Tokyo on DVD at Amazon UK