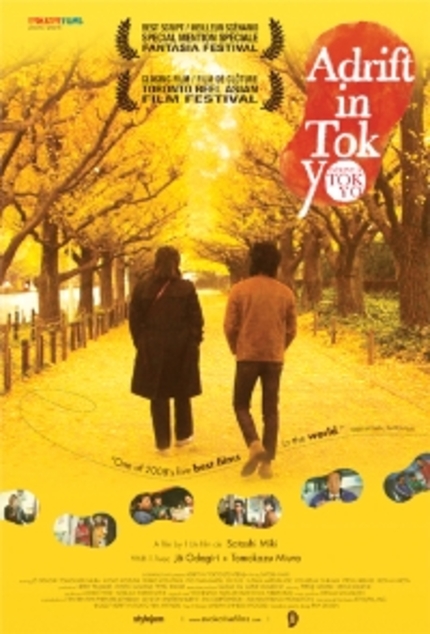 Well this is just... just... well it's just FANTASTIC news coming from our friends at Evokative Films. Together with Fantastic Fest they will be having their first ever US theatrical release in Austin, Texas early in December. the film? You might have heard about it around here. Adrift in Tokyo!!! Do not miss this opportunity to catch this absolute gem of a film that is clearly a favorite of us around these parts.

The film will be screening at the Alamo Drafthouse Ritz theatre in downtown Austin, Texas, as part of the Fantastic Fest Signature Series. On December 1st there will be one free screening at 7pm for Fantastic Fest 2010 badge holders, to be followed by a regular run on the week-end of December 4th, 5th and 6th.

Tim League, Director of the Fantastic Fest, said "In 2008, we tried desperately to bring to Fantastic Fest one of my favorite films of that year, ADRIFT IN TOKYO. Hot on the festival circuit at the time, there was no print available for our fledgling festival. Now the film has finally found a home in Canada with our pals at Evokative Films. Since we're such huge fans of the film and want to support it any way we can, we've arranged to ship the Canadian print down to Austin. We'll start it off with a free screening for 2010 Fantastic Fest badgeholders and then open it up to the general public. I think you will be as charmed by the film as I was."

You knows what this means. Tim, I'm bringing down TWO bottles of ice wine next year because of this. Steph, you're coming down to Austin next fall to get drunk with us.
Tweet Post Submit