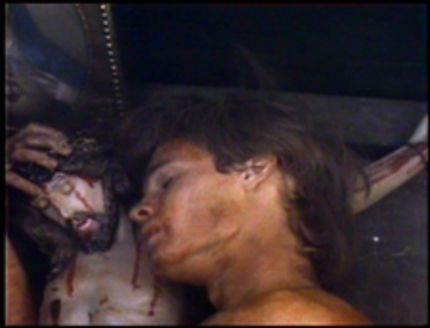 A demented lo-fi tumble into dark surrealism, Robert Martin Carroll’s undeservedly obscure ’89 opus Sonny Boy plays like the institutionalized cousin of the Coens’ saccharine-by-comparison Raising Arizona. Anchored by a trio of outstanding turns from reliable genre thesps Paul L. Smith, Brad Douriff, and David Carradine (in drag and crooning over the credits), the film garnered relatively glowing critical praise and minor cult plaudits upon its initial release but has since faded into unjust obscurity. Last seen on laserdisc courtesy of Media and 20th Century Fox, the film was once the property of ‘80s VHS mainstay Trans World Entertainment, with some rights resting with HBO. Its exact whereabouts remain a mystery, a shameful fate for a film so consistently original and daring.

Discovered as a baby in the back of a cherry Thunderbird lacky Douriff hijacks for low-rent criminal couple Smith and Carradine, titular Sonny isn’t so much nurtured as he is (sometimes literally) dragged into murderous adulthood by his surrogate family. When he’s finally loosed on the world, the film careens toward a violent climatic siege on the family’s dust bowl compound.

Perhaps best described as a dark fairy tale, Sonny Boy’s skewed approach to its frequently unpleasant subject matter keeps viewers off-balance. Filtering action through Sonny’s childish, warped perspective and bits of abstract narration, the most vicious of acts are lent a dreamlike, idyllic quality very much at odds with reality. The script is consistently effective, but far from perfect. Its late-game shift into a quasi-Frankenstein riff (complete with angry townsfolk and a creature-creator schism) exemplifies the film’s uneven keel which, although distracting, doesn’t damage its overall impact. Sonny’s reach exceeds its grasp but how can you argue when so much is reached for in such unorthodox fashion?

There are so many odd, wonderful moments shoveled in to help fuel Sonny Boy it really deserves a deeper analysis than the one I humbly offer here. For me, right now, it’s enough to draw whatever attention I can to a title unfortunately lost to time. If it dropped today, Sonny Boy would set sites like Twitch and AICN on their ears. It’s the sort of considered, artful filmmaking people should have the chance to experience without trekking to the ends of the earth, or at least the grotty corners of swap meets.

My company is representing the producer so we have the rights available for some countries.
For more informations please contact me : dcmedias@noos.fr

This movie is incredible. I would buy a DVD in a second.