Review: STONEHOUSE, Too Ambitious For His Own Good 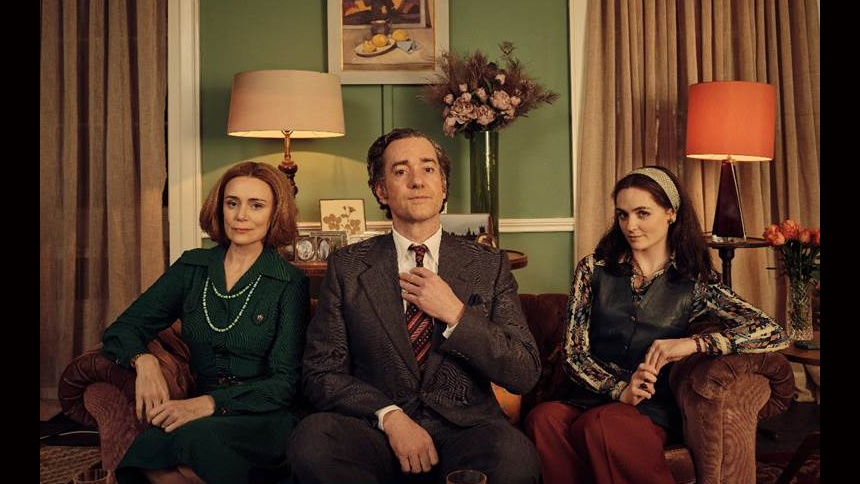 Why you got to fake your own death?

Matthew Macfayden transfers some of his likable characteristics from the supporting role he plays on HBO's Succession into a new limited series about a sincere, well-intentioned family man whose political ambitions and personal infidelities collide, to disastrous effect, early in the 1970s.

In Succession, Macfayden embodies a somewhat dim, self-interested person who puts his own interests above all else, in service of ensuring an easier path for himself. In Stonehouse, Macfayden embodies John Stonehouse, a young and ambitious MP, who aims to reach 10 Downing Street, with the support of his devoted wife, Barbara (Keeley Hawes) and their three children.

Selected for the new cabinent of Prime Minister Harold Wilson (Kevin R. McNally), Stonehouse happily flies off to Czechoslovakia and is promptly ensnared by a comely "translator" into a honey trap, whereupon he is threatened with photographic exposure unless he becomes a foreign spy. Stonehouse's qualifications for espionage are dubious, at best, but he readily agrees when told he will receive large cash payments if he delivers.

Quickly losing whatever spine he might have possessed, Stonehouse just as quickly becomes overconfident about his new status as an overpaid "spy," spending his ill-gotten gains on a larger house and private school for his children, while falling in lust with his comely new secretary, Sheila (Emer Heatley). Stonehouse's good fortune doesn't last long, however, and soon enough he finds that he has fouled up royally, and is about to lose everything that should have mattered more to him: his wife, his children, his house, and his reputation.

Unless he fakes his own death, that is.

Written by John Preston, inspired by true events, the three-episode series is directed by Jon S. Baird (Stan & Ollie, 2018; Filth, 2013). Preston's script is solid, establishing the bones of the story that Baird and editor Steven Worsley elevate through a bouncy pace that moves swiftly forward.

Macfayden creates a captivating leading man, a fellow whose ambitions push him past his abilities and into criminality. He's the sort of fellow who isn't as smart as he thinks he is, and that always leads to trouble.

Through the first episode, Keeley Hawes has been hanging back as dutiful housewife Barbara, accepting the role that has been dictated by British society in the early 1970s and reinforced by her husband. Yet even so, her eyes are full of questions about his activities.

She clearly suspects that everything is not as he says it is, but, probably thinking about the children, is waiting until she has more evidence available to her to take more direct action. As the first episode concludes, it looks like she'll have plenty to act upon.

Do you feel this content is inappropriate or infringes upon your rights? Click here to report it, or see our DMCA policy.
BritBox CanadaJohn StonehouseKeeley HawesMatthew MacfaydenUK