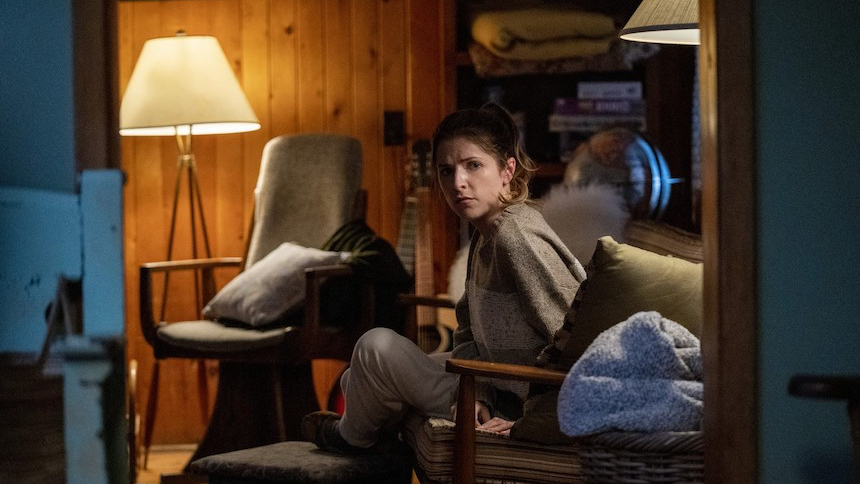 First-time director Mary Nighy and writer Alanna Francis’s (The Rest of Us) multi-layered, thought-provoking psychological thriller, Alice, Darling, opens with the title character (Anna Kendrick) floating in the murky waters of an unnamed lake, seemingly caught in a decisive moment that will determine her future with or without her longtime boyfriend, Simon (Charles Carrick).

Alice, Darling returns to that moment more than once, adding necessary backstory and context along the way, turning Alice’s predicament into a character study of a woman caught in an abusive relationship, her identity, friendships, and even her personal safety determined by the question hanging over Alice, Darling from the opening moments: Should she stay or should she go?

When we first meet Alice, she’s on the way to a girls’ night out with her childhood friends, Tess (Kaniehtiio Horn), a struggling artist facing questions about her own future, and Sophie (Wunmi Mosaku, Lovecraft Country), the most professionally and personally stable of the three, finding fulfilling work at a non-profit. Nighy and Francis sidestep the question of Sophie’s socio-economic background, but her invite to the family cabin for a weeklong getaway suggests a level of relative affluence unlikely shared by Alice or Tess. Neither Sophie nor Tess appear to be in long-term personal relationships, highlighting Alice’s centrality to the trio and the plot itself.

Either way, the invite poses a problem for Alice. Deeply entangled in a toxic, destructive relationship with the hyper-controlling Simon, Alice has lost a significant portion of her independence and personality, constantly gazing at her cell phone, answering Simon’s texts almost immediately, and keeping an eye on the door before excusing herself.

A mid-level artist with narcissistic tendencies, Simon has perfected the art of manipulation, shifting from showering Alice with affection one moment and criticizing her moments later for her non-support of his artistic endeavors. And when he’s not either, he’s casually picking at her presumed faults, all the better to keep her close and under her control.

The week away with friends should be a respite for Alice, but Simon’s presence haunts her at every step, eventually threatening to poison her relationship with Tess and Sophie. A secondary subplot involving a missing local girl adds an ominous note to their getaway, not so subtlety suggesting that male violence, real or threatened, isn’t something Alice or any woman can easily escape. That Alice joins a search party points to her halting realization and awareness about herself as a potential victim of domestic violence.

Though working in and through familiar thriller tropes, Nighy and Francis studiously avoid dipping too far, instead preferring a growing sense of dread as a haunted Alice steps ever closer to confronting Simon about his behavior and their future, if any, together. Nighy and Francis interweave Alice’s present-day experiences at the lakeside cabin with intrusive, call-and-response memories of Simon, by turns charming and menacing. This particular device gives audiences on the other side of the screen continuing insight into Alice’s troubled state of mind, even as Alice, Darling moves towards what seems an inevitable confrontation with Simon for Alice’s future.

To Kendrick, Horn, and Mosaku’s credit, their depictions of three lifelong friends feels grounded, lived-in, and most importantly, believable. While Kendrick appears in every scene, she’s often a recessive figure, deliberately remaining in the background as Horn and Mosaku’s ebullient characters take position front and center.

Kendrick’s also asked to deliver a quieter, more inward-looking performance here than she’s typically given in the past. Unsurprisingly, she excels in conveying Alice’s ever-changing mental and emotional state.

Alternatively, Tess and Sophie occasionally feel less like fully developed characters than functional plot devices. Horn and Mosaku, however, add layers of nuance to Tess and Sophie, respectively, each one with an inner and outer life above and beyond their relationship with Alice. In the end, solidarity proves to be the driving force behind Alice, Darling, and the central characters.