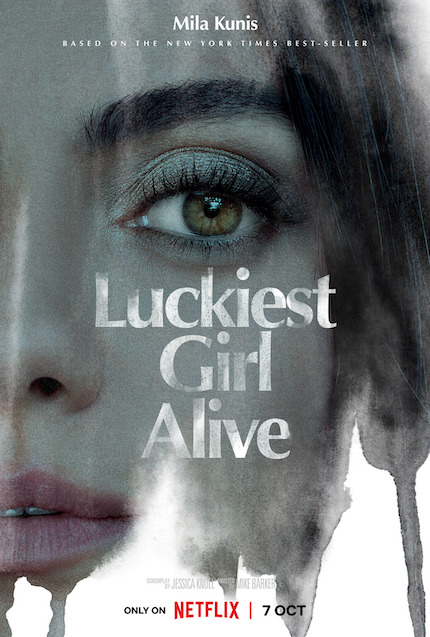 Director Mike Barker unveils Luckiest Girl Alive, based on the book of the same name by Jessica Knoll.

In the film, Mila Kunis stars as magazine editor TifAni FaNelli and is set to marry her fiance, Luke Harrison. FaNelli, however, is left to deal with the trauma of being a survivor of a school shooting and a previous gang rape by her previous friends Liam and Dean, with the former being killed and the latter being paralyzed during the school shooting.

There might be some improvement needed on its execution but it still has a slappy dose of entertainment coming from Kunis' charismatic and magnetic performance.

Maybe we should start with the positives. The film's accomplishments squarely lie in Kunis and her independent attitude. Her character TifAni was brought up in a Catholic High School and she was socialized with other popular and smart kids. Her mother made her go to the best school so she could meet the most affluent men to marry and fulfill her 'female obligations.'

However, after a gang rape and a school shooting that left one of her rapists, Dean, paralyzed, TifAni comes across a documentary filmmaker working on a project about her school's shooting incident. Dean is also being interviewed, and TifAni's moral obligations are compromised because she must decide whether or not to expose the wheelchair-bound Dean as the sexual predator that he is.

The themes are very strong in the film and they lead to a moral climax that allows audiences to understand the stigma behind female rape victims, Kunis does a phenomenal job at portraying that dark issue.

When it comes to positives, that is where the buck stops. The film is very uneven narratively and the flashbacks don't always blend together with what came before or after. (For example, one flashback is composed entirely of a confusing muddle of shots.)

Moreover, while its themes certainly are relevant today, they fail to boast a groundbreaking rhythm with audiences and much of the film almost comes across as a forgettable CW drama. In many cases, there are inconsistencies with the tone of the film. It was hard for me to tell whether it was a comedy or a drama at times, starting off as an adult drama, drifting into a high-school teen comedy, and then finishing off as an open-ended Greek tragedy.

Either way, combining these tones made for a corrupted canvas rather than a cohesive symphony of well-orchestrated parts.

All in all, Kunis is certainly a talented actress, but the material for this film was simply not endearing enough to make it memorable for its audience. At least Kunis can walk away with a smile on her face, like she did at the end of the film.