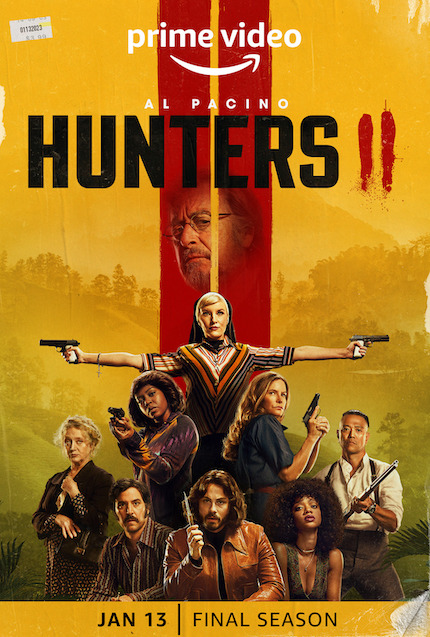 Al Pacino returns as Meyer Offerman, the wealthy Jewish leader of a diverse group of vigilantes who are determined to wipe out every Nazi still alive in 1977.

If you watched all ten episodes of the first season, then it's not a spoiler to say that Meyer Offerman concluded his leadership run in the final episode, which also teased the existence of Adolph Hitler. Creator David Weil brings Meyer back in 1975, before the vigilantes known as The Hunters were formed into a group, while also picking up the primary narrative thread after the passage of two years, when they have splintered across the world.

The first episode quickly gets the band of vengeful hunters back together after a villain from the first season claims that Hitler faked his own suicide and escaped to South America. Killing Hitler pushes everything else out of the way, though not entirely in the mind of Jonah (Logan Lerman). He has settled down in France, grown out his hair and beard, and is planning marriage to his lady love, Clara (Emily Rudd), who knows nothing of his murderous life as a Nazi hunter/executioner.

The rest of the team functions as an ensemble supporting cast. Black and gay, Millie (Jerrika Hinton) is a CIA agent who is frustrated by the American system of justice, but each of the others -- including Holocaust survivor Mindy (Carol Kane), actor Lonny Flash (Josh Radnor), Sister Harriet (Kate Mulvany), and Roxy (Tiffany Boone) -- have their own motivations for Nazi hunting, which were detailed in the first season.

Meanwhile, former Nazi hunter Joe (Louis Ozawa) has been kidnapped and then brainwashed into becoming a Nazi defender, along with the truly evil Travis (Greg Austin), a cartoonish villain. The Colonel (Lena Olin), the apparent leader of the Nazi movement in America during the first season, is revealed to be Eva Braun, who returns to stand alongside Hitler, who is, of course, embodied by Udo Kier as the personification of True Evil in a very hissable performance.

The first season expounded upon every major character's background through its ten episodes; the second season brings another juicy performance by Al Pacino, who plays the same character with an entirely different mindset, as well as a juicy performance by Jennifer Jason Leigh as Chava, a Nazi hunter with a singular focus.

To repeat what I wrote about the first five episodes of the first season: "At its base, Hunters is watchable, if bloody and often distasteful. Most often, this is due to the presence of Al Pacino, who is always watchable, and the increasing talents and versatility of Logan Lerman, who rages and recoils and remains fascinating as a leading character." With the second season, the series remains watchable, bloody, and often distasteful in its violent extremes, though I was not as taken with Lerman's performance, which sticks to fewer notes.

Instead, I thoroughly enjoyed what Jennifer Jason Leigh brought to the table, and also Jeannie Berlin, who appears in the scenes from 1975 in which Al Pacino takes no prisoners, yet allows space for other actors to breathe and make an impact. That's also a tribute to director Phil Abraham, who helms five of the eight episodes.

It's a solid bloody show, if you're in the mood for killing Nazis, no questions asked.

Do you feel this content is inappropriate or infringes upon your rights? Click here to report it, or see our DMCA policy.
Al PacinoLena OlinLogan LermanPrime VideoUdo KierUS