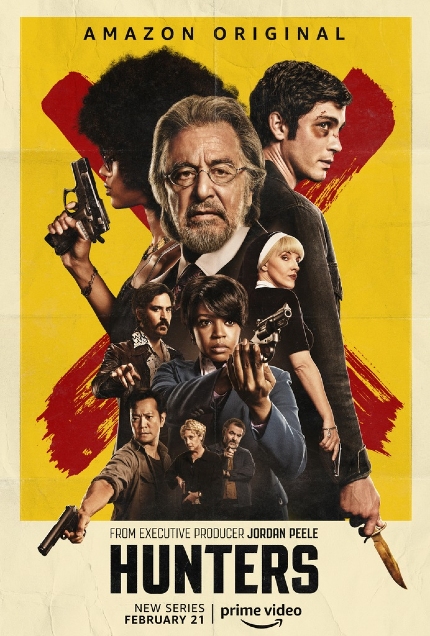 Hunters
All 10 episodes of the series will be available to stream on Amazon Prime Video on Friday, February 21.

Created by David Weil, Hunters comes back to Earth after its first sequence.

Wavering in tone throughout the first five episodes made available for preview, the series nonetheless remains compelling for genre audiences, in large part because it keeps pumping a steady supply of blood, violence and outrage onto the small screen, accented by a continuous stream of profanities and adorned with a healthy dose of diversity.

A la Quentin Tarantino, Hunters pushes early and often into a fantasyland that feels like an updated version of faux-hip curiosities, such as TV's Mod Squad (1968-1973), or maybe even Charlie's Angels (1976-1981). Like those shows, which have not aged well, Hunters is built around an arresting premise: Nazis in America!

Bolstered by the presence of Al Pacino as the wealthy Jewish leader of a diverse group of people dedicated to taking the law into their own hands. the titular hunters mete out justice or, more accurately, revenge upon Nazis who have escaped to America and are living under assumed identities in 1977, all while plotting the Fourth Reich.

As revealed gradually, each crew member is driven by personal motivations, whether they are Jewish, African-American, Asian-American, or another race or ethnic background or sexuality. The anti-Nazism avengers have given up on lackluster and inefficient law enforcement, though they themselves have made exhaustive efforts to check and double-check their conclusions to decide who should be (possibly) tortured and executed for their genocidal crimes against mankind.

Superbly directed by Alfonso Gomez-Rejon, the first episode kicks things off with a dramatic bang, establishing New York City in the summer of 1977 (aka Star Wars summer) as the starting point. David Weil's excellent script sets up a moment of crisis and consciousness for series lead Jonah Heidelbaum (Logan Lerman), which eventually leads him to Meyer Offerman (Al Pacino). Throughout the episode, the tone remains highly-dramatic and suspenseful, even as it meets the expectations of a pilot episode for a series, introducing the principal players and the longer-term stakes that are involved.

Slowly but surely, however, the tone embraces more of a comic perspective, endeavoring to provide a wry commentary upon the self-evident outrageousness of the Nazi-hunting group's diversity. As the tone becomes broader, it pushed me away from the tight involvement I initially felt to the premise and the players.

The advantage of Tarantino's Inglourious Basterds, for example, is that Tarantino is a superb filmmaker. Even if his themes and/or creative decisions repel at times, that film, and most of his other historical re-imaginings, are convincing as part of his own corner of the cinematic universe.

Hunters struggles to say what it evidently wants to say. Is it to mock the evil Nazis and their pathetic attempts to regain power? Or to honor and pay tribute to brave people who faced extermination and refused to cave on their righteous principles? Or something else entirely?

At its base, Hunters is watchable, if bloody and often distasteful. Most often, this is due to the presence of Al Pacino, who is always watchable, and the increasing talents and versatility of Logan Lerman, who rages and recoils and remains fascinating as a leading character.

Do you feel this content is inappropriate or infringes upon your rights? Click here to report it, or see our DMCA policy.
Al PacinoAmazon Prime VideoDavid WeilLogan Lerman