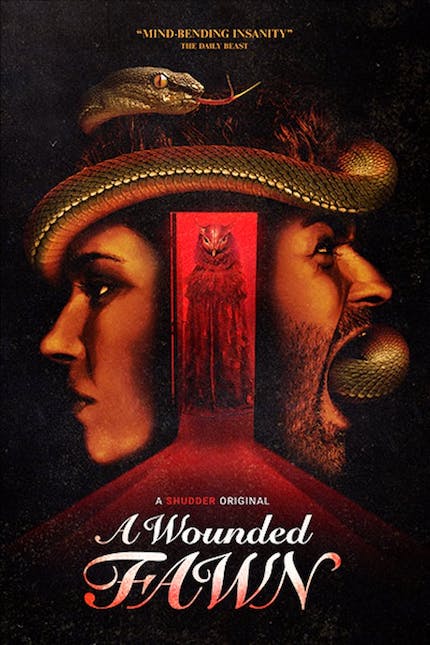 Getting away for the weekend sounded like a good idea at the time.

A Wounded Fawn
Now streaming on Shudder and AMC+.

Museum curator Meredith (Sarah Lind) is just getting to know Bruce (Josh Ruben), so she accepts his invitation to get away for the weekend at a cabin in the woods.

Yup, that's how many horror films begin, as filmmaker Travis Stevens clearly knows. Stevens has produced many surprising and clever genre films over the years, and his directorial efforts -- Girl on the Third Floor (2019) and, especially, Jakob's Wife (2021) -- have displayed his knowledge of genre tropes, as well as his ability to subvert them with a sure hand.

Stevens is a filmmaker who thinks like a viewer. He knows what you know, and he wants to surprise, yes, but he also has bigger ambitions than a jump cut or a narrative twist, and all that is evident in A Wounded Fawn. The original screenplay is credited to Travis Stevens and Nathan Faudree, and it is clever and off-kilter in how it is structured and developed, from its brash opening sequences to its introduction of a "cabin in the woods" that is anything but a rustic log structure.

Instead, it's lovely and spacious and filled with art, which appeals to Meredith, though she has already seen warning signs that trouble may lie ahead. She wants to remain positive about the possibilities of the weekend for as long as possible.

Before we meet Meredith, however, we as viewers have already seen ample evidence suggesting that the weekend may be a fatal mistake for Meredith, and so we have good reason to wonder how the story will unfold; it's almost like we're holding our breath, waiting to see if filmmaker Stevens will follow well-worn paths or carve out something new.

To the delight of genre fans, the film blazes its own trail of blood, guts, and extreme freakiness. Stevens mixes various elements together like he's mixing colors prior to painting, which I'm hesitant to mention to avoid spoiling anything, but just when I thought I had things figured out, another element unfolded.

Eventually, it all makes complete sense and coheres into a beautiful, righteous, if somewhat chaotic painting, driven by the strong, surprisingly complex performances by Josh Ruben, Sarah Lind and Malin Barr. Director Travis Stevens makes it all hang together.

Do you feel this content is inappropriate or infringes upon your rights? Click here to report it, or see our DMCA policy.
Josh RubenMalin BarrSarah LindTravis StevensUSNathan FaudreeHorror

More about A Wounded Fawn