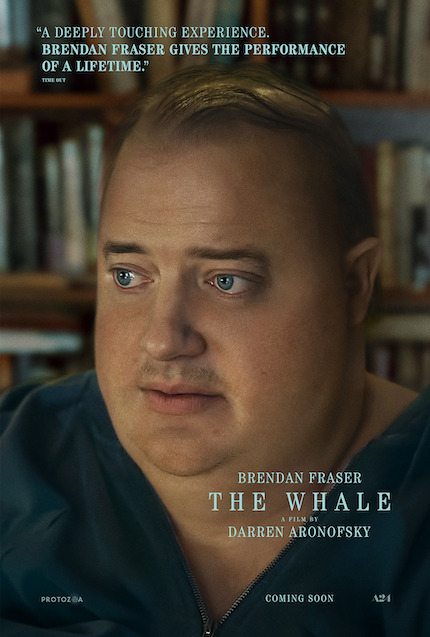 Having built up a critical head of steam after bowing at the Venice Film Festival in September, Darren Aronofsky's The Whale opens Friday, December 9, in select movie theaters.

Our own Eric Ortiz Garcia saw the film at the Los Cabos Film Festival last month, and noted: "Since its world premiere at the latest edition of the Venice Film Festival, it's been particularly notorious and controversial for Brendan Fraser's leading role: Charlie, a morbidly obese man.

"Fraser's characterization is, undoubtedly, memorable. Charlie can't get around without a walker, teaches writing online but keeps his webcam turned off to hide his appearance from class, and doesn't stop eating fried chicken or pizza."

"The Whale isn't only this, though, since it touches on many other topics from a theatrical approach: it's based on a stage play by Samuel D. Hunter - also screenwriter for this adaptation - and it takes place entirely in one location (the protagonist's apartment), with a handful of characters that enter and exit the frame. Nothing more is needed for the construction of a hard portrait, full of emotion."

Follow this link to read Eric's entire review. To learn more, visit the official A24 Films site. Watch the trailer below.

Do you feel this content is inappropriate or infringes upon your rights? Click here to report it, or see our DMCA policy.
A24 FilmsBrendan FraserDarren AronofskySophie SinkUS

More about The Whale