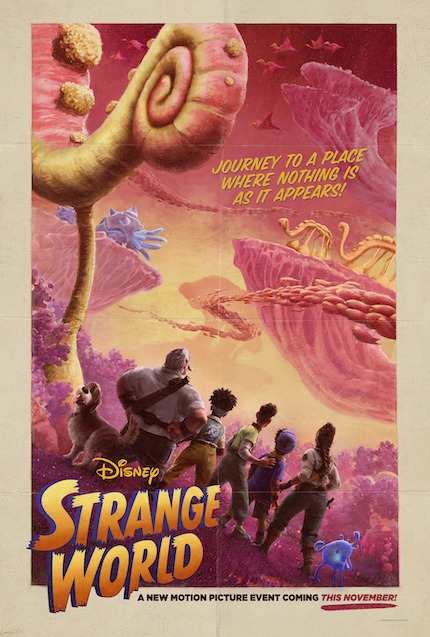 The result is a wildly imaginative, inventive science-fiction adventure wrapped around an intergenerational family drama, a coming-of-age tale, and easily digestible, but no less relevant, environmental themes. Altogether, that may not, when all is said and done, count among Disney’s all-time best animation-wise, but at a minimum, it belongs in the conversation.

Wherever that conversation leads, however, first and foremost, attention should be given to Strange World's brilliant world-building, spectacular set pieces, and fast-moving narrative pace. Almost immediately after introducing a father-and-son duo, Jaeger (voiced by Dennis Quaid) and Searcher Clade (voiced by Jake Gyllenhaal as a bearded adult), via a collection of faux-comic book pages and the subsequent expedition that literally and figuratively ends with the breakup of their personal and professional partnership, Strange World leaps forward time-wise to a utopian future powered by a seemingly abundant, energy-filled plant species, Pando, that fuels magnificent flying airships, hover-cars, and everything else in the isolated nation-state of Avalonia.

An end to Avalonia’s utopian existence seems likely, though, when the super-powered plants begin to wither on the vine, leading to a hastily put-together expedition to the farthest reaches of the nation-state’s alpine borders and an underground chamber – the “strange world” of the title – where all manner of hybrid flora and fauna, ranging from the shapeless but harmless to the monstrous and deadly. The latter, tentacled monsters who devour everything in their path, take their inspiration from H.P. Lovecraft’s cosmic horrors, making them, at least whenever they’re on screen, the stuff of nightmares for young, old, and everyone in between.

While Strange World draws inspiration from Jules Verne’s classic science romance, Journey to the Center of the Earth, Edgar Rice Burroughs’s pulpy At the Earth’s Core, Arthur Conan Doyle’s The Lost World, and Merian C. Cooper and Ernest B. Schoedsack’s King Kong (among other works of fiction, especially of the “hollow earth” kind), it’s ultimately far more than its borrowed, cobbled-together parts. That's due primarily to the deep, textured world-building created by Hall, Nguyen, and their myriad collaborators at Disney Animation.

It's not an adventure, of course, without interpersonal conflict. Besides the unresolved issues Searcher has with his long-absent father, he’s facing similar issues with his teenage son, Ethan (Jaboukie Young-White). Where Searcher went along to get along on his father’s exploratory adventures, eventually settling down to become a farmer, getting married, and becoming a father, Ethan’s extroverted personality, and eagerness for a life beyond the routines and rhythms of the family farm, suggest he has far more in common with his wayward grandfather than his own father.

Hall and Nguyen, though, never let that intergenerational conflict get in the way of the larger adventure story, weaving Ethan’s natural rebelliousness with Searcher’s understandable overprotectiveness while keeping the outward conflicts, specifically the perpetual dangers posed by the underground world’s creatures, almost always at the forefront. While certainly not a first for Disney Animation, Ethan’s sexual and racial identity (he’s biracial and queer) are both thankfully treated as givens and not subjects for long-winded debate or handwringing by any of the onscreen characters about acceptance or absence thereof.

If that makes Strange World feel all the more utopian, especially given recent and not-so-recent events stateside, including the mid-term elections that effectively ended in a stalemate, leaving democracy and civil liberties in the balance, then that makes Disney’s latest even more welcome as fittingly escapist entertainment, where who you love matters far less than your willingness to go on a world-changing adventure together with your family and friends. 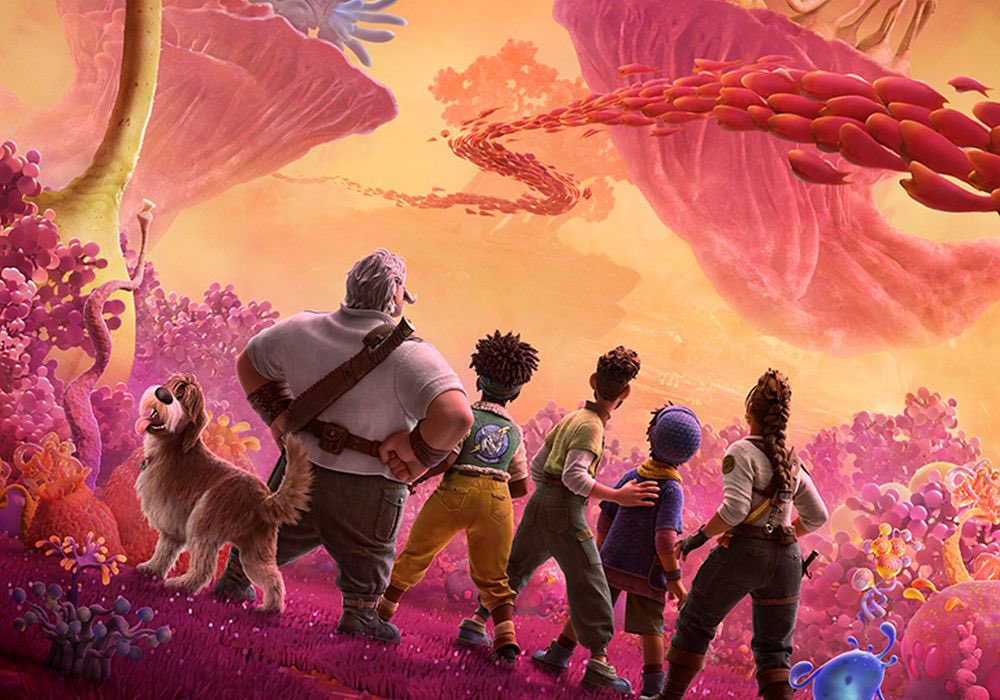