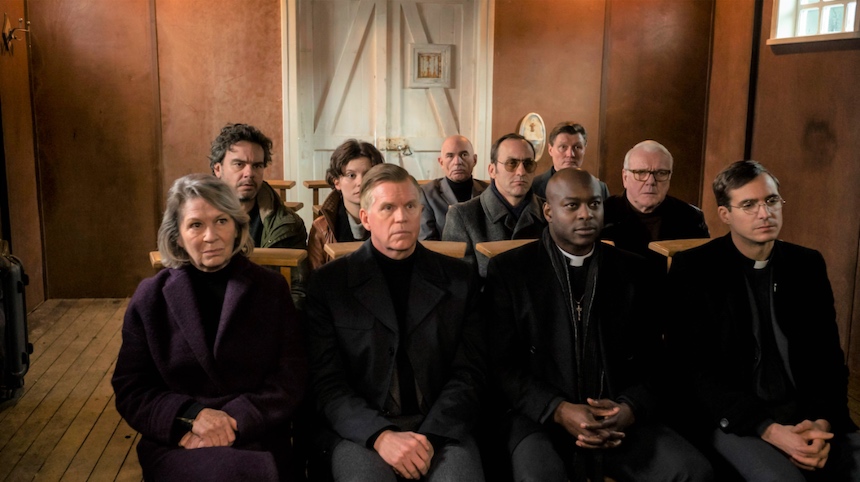 Sometimes, it's better not to know anything about a movie before watching it.

Filmmaker Alex van Warmerdam surprised and delighted with his bold, clever, and stylish feature film Borgman at Fantastic Fest in 2013. Though I missed his next Fantastic Fest entry, Schneider vs. Bax in 2015, I was incredibly delighted to discover his latest feature, Nr.10, made its world premiere at this year's Fantastic Fest.

And that's all I should say about it, because it's a freakin' fantastic (?!) film. It begins like a deadpan comedy of sorts about an adulterous affair among actors and their director as they rehearse a new, absurdist stage production. Then it morphs effortlessly into something else entirely, and I will definitely not be writing about that, because I am definitely not going to spoil that for anyone who enjoys van Warmerdam's films.

So let's begin with the opening scenes. They are elegantly designed and staged. The story, as it develops, is intriguing. We start with an older individual, who leaves his sickly wife in bed as he heads off to work, carpooling with three other stoic people.

All four, it turns out, are actors in a stage production. The older actor doesn't know his lines, because his sickly wife is keeping him up at night. The director is infuriated by that.

Two of the actors are having an affair that they are endeavoring to keep secret, to the extent that one of them, when his daughter comes to visit for dinner with her boyfriend, insists on his paramour remaining in the bedroom in hiding. During dinner, the daughter reveals that a recent medical examination shows that one of her lungs is larger than the other, which is almost non-existent. Her father is not interested in the slightest.

The actors and the director continue to rehearse, more strange things happen, and then events take a diabolical twist when the affair is discovered. Shortly thereafter, even more mysterious, then astounding events occur, still told in the same deadpan manner.

All this told by writer/director van Warmerdam at an unhurried pace, allowing for the enjoyment of the performances, and might be enough for other movies if it concluded right there. But van Warmerdam has something else in mind, which he has been setting up throughout the first part of the movie, and it turns out to be delectable and quite wonderful.

See Nr.10 as soon as you can. I suggest not telling anyone what happens.

Do you feel this content is inappropriate or infringes upon your rights? Click here to report it, or see our DMCA policy.
Alex van WarmerdamBelgiumFrieda BarnhardHans KestingNetherlandsTom DewispelaereDramaMysterySci-Fi