Review: ARMAGEDDON TIME, Refracting the Past Through the Eyes of a Young Man 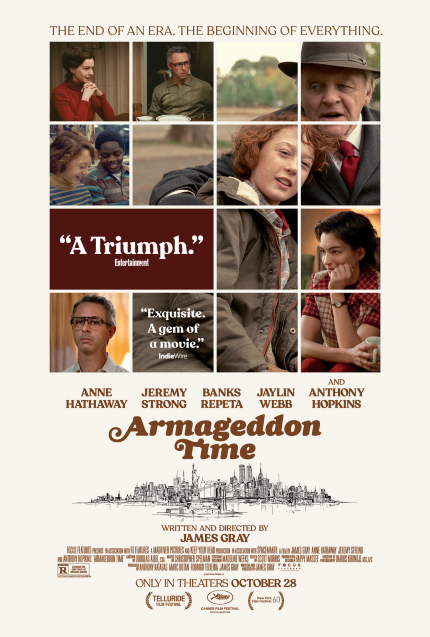 The past is a funny thing. It's always changing.

Armageddon Time
The film is now playing in limited release and will expand in movie theaters throughout the U.S. on Friday, November 4, via Focus Features. For more information about the film, visit the official site.

Filmmaker James Gray has said that Armageddon Time is inspired by his own personal experiences as a young Jewish boy growing up in New York City. As we all know, though, the past is a minefield planted with destructive bombs. We remember certain events very well, especially those that had a lasting beneficial impact upon us, while we do our best to release memories that we don't wish to recall.

In Gray's telling, his stand-in family is dramatized as the Graffs, a family in Queens that was founded by the declining patriarch, Grandpa (Anthony Hopkins), who fled Europe ahead of Hitler. His son, Irving, broadly caricatured by a thickly-accented Jeremy Strong, and daughter-in-law Esther, captured lovingly by Anne Hathaway, are parents to Paul (Banks Repeta) and his older brother Ted (Ryan Sell).

Young Paul is filmmaker Gray's personal stand-in and his coming-of-age story is told through his eyes, so nearly everything in the film reflects his memories as a young man on the cusp of adulthood. Gray, however, avoids the usual traps of nostalgic sentimentality; thus, the film feels different from nearly every other coming-of-age story, with the characters acting in a manner that is not always praiseworthy, yet feels relentlessly authentic.

The story begins in September 1980 with Paul beginning a new school year as a troublemaker who quickly makes a new friend in Johnny Davis (Jaylin Webb), who is apparently the only Black kid in Queens, or at least in the neighborhood where the Graff family lives. (Personal aside: I visited New York City in 1981 and 1982 before moving there in 1984, but I can't recall spending much time in any neighborhood like the one depicted in the movie. Maybe that was a good thing for my health and safety, as someone with Mexican/white mixed parentage and lower-middle class instincts.)

Paul's grandfather dotes on him, but his careless, non-studious behavior and his restless antics with Johnny very much concern his mother and father, who soon decide to enroll him in the same private school where his brother attends class, with the hope that he will cease any association with Johnny and start applying himself to his studies. Perhaps needless to say, things do not go as expected or hoped for.

Without ever giving way to dramatic flashiness or creating extreme moments of thunder, the film still pulses with life, beautifully shot by Gray's usual collaborator, director of photography Darius Khondji, and edited by Scott Morris to enhance every key moment in a gentle, true manner. The performances are finely modulated. Director Gray gives each key actor, notably Hopkins and Hathaway, at least two scenes in which it's the actor's subtle graces that makes the scenes dramatically effective.

For much of its running time, Armageddon Time doesn't call attention to itself. This can present a daunting challenge to viewers, including myself, who are accustomed to films -- especially 'coming-of-age' stories -- that shout out their narratives and give advance warning about their narrative direction. For most of his filmmaking career, however, James Gray has defied expectations and created his own path forward. Now it's resulted in what may be his warmest, truest film yet.