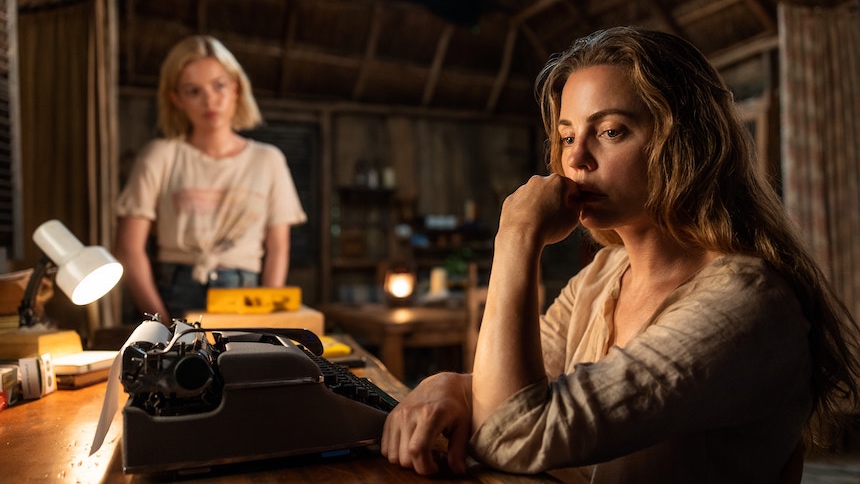 Mosquitos are the least of their problems.

Creating an easy on-ramp for any viewer who might consider jumping on board, the first episode of the second season resets the table, clearing away the mysterious intrigue that hung like a thunderous cloud over the first season, clarifying apparent motives and pointing forward to an uncertain future.

The seven-episode first season functioned almost like an extended prequel and side-jaunt to Peter Weir's 1985 film version of Paul Theroux's novel (first published in 1981). The series began on a high note with two tight and tense episodes, as I noted in my May 2021 review, perhaps causing me to raise my expectations unreasonably high. Unfortunately, that tension steadily dissipated in the following five episodes as they paddled in narrative waters, taking a prolonged, meandering detour into confusion and, to be frank, increasing irritation. I lost interest in what might happen to the characters.

Going back to the start of the whole story allows the series to reboot. Depicting events from 13 years before the family decamped to Central America, the series is able to contradict the old saying: 'You never have a second chance to make a first impression.'

The fresh perspective establishes Allie Fox (Justin Theroux, nephew of the novel's author, acclaimed writer Paul Theroux) and his estranged wife Margot Fox (Melissa George) as the parents of two young children. They are both strong-minded about their individual career paths, which has brought them into repeated conflict. An inciting event is what causes them to go off the grid and on the run, which is what they explain to their now-teenage children -- Dina (Logan Polish) and Charlie (Gabriel Bateman) in Central America, where they have ended up after events in the first season.

The second season dips back into some of the themes (and characters) introduced in the first season, using them as a springboard to explore the family's dynamic and the people they meet and/or reencounter. In this, the series continues to depart from Paul Theroux's original novel and Peter Weir's film, of which the latter was more of a faithful adaptation of the novel's plot with its own side trips, digressions, and a very hot and humid Harrison Ford (and Helen Mirren and River Phoenix).

Hewing closer to a clear-eyed narrative, the series nonetheless continues to cloak certain story developments in mystery, while the family's individual motivations become more understandable and relatable. The same goes for the novel's underlying themes about the dangers of popular consumerism and the horrible damage done to natural habitats and people by greedy corporations; the themes bubble to the surface as a logical consequence of actions that are taken by new and returning characters.

The show dials down its incessant twists and turns, which makes it easier to follow and easier to remain engaged with the primary characters. Justin Theroux, Melissa George, Logan Polish and Gabriel Bateman all find new notes to play as they flesh out their respective members of the family -- most notably Polish as well as Bateman, who both give outstanding performances, filled with fire -- showing how the rippling effects of the inciting incident affect them as the children grow older and more aware of what is happening. As for the parents, they must learn to deal with the consequences of their actions, instead of just running away from them.

These various little adjustments, whether planned from the series' creation or hatched in progress, combine to enhance the watchability and steadily heighten the dramatic tension, making season 2 of The Mosquito Coast a richer, more satisfying meal, meticulously designed and structured to be consumed and digested on a weekly basis. (The final two episodes, especially, are superbly plotted, textured, and enacted.) It's still hot, humid, and sticky, but this time for all the right reasons.

More about The Mosquito Coast