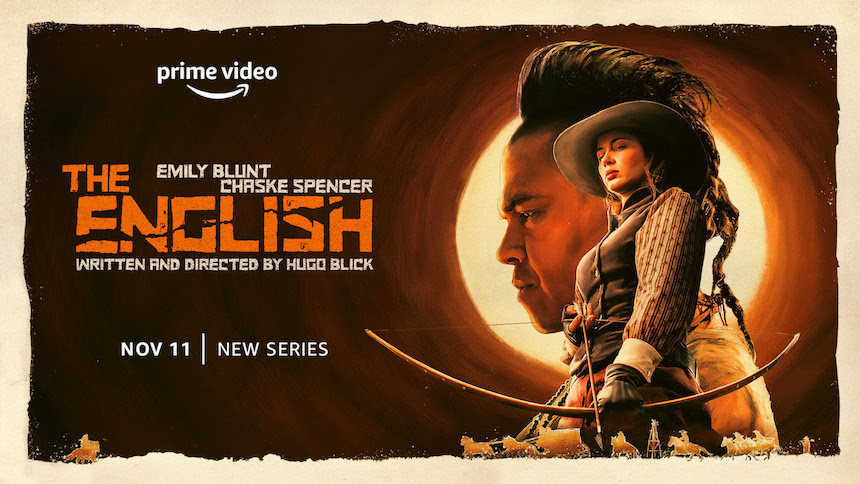 The English
The first episode of the series is now streaming on Prime Video. New episodes will debut weekly. I've seen all six episodes.

An aspirational Spaghetti Western, written and directed by Hugo Blick, who has made a lot of British television shows that, frankly, I have never seen, The English makes its intentions clear in its bloody and cruel first episode.

Emily Blunt stars as Lady Cornelia Sharpe, who is dressed to impress in an Old West built from blood and sand. Early on, she demands that a Native American, strung up for no apparent reason in the middle of the day, be released immediately, whereupon the Completely Evil Yet Impeccably Dressed villain #1, played with hissing nastiness by the great Ciaran Hinds, smacks her in the face, knocking her down and out.

But not for long! Writer/director Hugo Blick frames every shot exquisitely, the better to showcase the blood that begins flowing early and often, accompanied by random brutality, creates a Euro-West view of the U.S. Old West that is divorced from any resemblance to civility, instead populated (nearly) entirely by "killers and thieves," to the utter disbelief of Lady Cornelia Sharpe, who is herself only in America in order to extract her own personal revenge.

It's a revisionist Western, I suppose, only in that all the stereotypical Western bad guys have all been replaced by wicked British -- sorry, English -- dudes who have escaped from a Guy Ritchie movie. If you're looking for that sort of thuggish violent kind of thing, with a noble Native American grafted in as the stoic leading man (Chaske Spencer), it's perfectly fine, especially when Emily Blunt is front and center.

She is in tip-top shape as a woman we want to know better, slowly peeling away layers of life in a gritty yet graceful performance that is the best thing about the limited series. 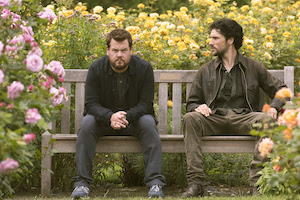 Mammals
The series is now streaming on Prime Video in its entirety. I've seen all six episodes.

Created by James Richardson and directed by Stephanie Laing, the series is written entirely by Jez Butterworth, whose deftly clever dialogue and extremely clever plot turns make this far more than its premise -- "praiseworthy man scorned by unfaithful woman" -- might scream out.

James Corden is the star of the show, playing a middle-aged chef opening a new restaurant who is outraged when he discovers that his younger wife (Melia Kreiling) has been stepping out on him, yet declines to confront her with the evidence, instead charging his best mate Colin (Jeff Wilson) with investigating her on his behalf, so that he can learn every grubby detail possible.

Butterworth milks the premise thoroughly, as things go from bad to worse, presenting everything through the chef's eyes. Just when it couldn't get any worse, we go back in time to see how the couple met, a development that throws everything we thought we knew out the window.

The series feels like an idea born out of frustration and anger, and cultivated in a garden of friendly reinforcement by longtime allies. It's not even remotely believable and never feels authentic, but I don't think it's meant to be.

Really, it's a means of letting off bottled steam that is not even close to being as self-righteously judgmental as it's apparently intended. But, whatever, it may be worth a laugh if you're in the proper late-night mood for it. 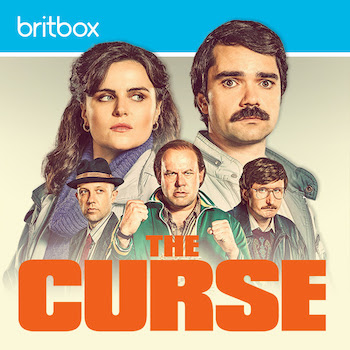 The Curse
The series is now streaming on BritBox in its entirety. I've seen all six episodes.

Another series that begins on a very promising note before eventually running out of gas, The Curse establishes very quickly that it's meant to be a comedy, a goof, and on that score it succeeds very well.

Set in East London during the 1980s, it follows a lovable group of friends who are struggling to get back in economic dark times under Margaret Thatcher. Albert (Allan Mustafa) and Natasha (Emer Kenny, writer/co-star of the recent Karen Pirie) star as a couple who run a restaurant. They worry about providing for their children and the uncertain times ahead. When one of their mates talks loosely about lax security protocols at a bank where he works as a guard, which leads to a robbery that turns into a much, much bigger job than they could ever have imagined: millions and millions in gold bars, somehow left unattended.

The 30-minute episodes zip by, more out of sense of comic unbelievability and the genuinely ordinary nature of the friends, who are more like your typical next-door neighbors than hardened criminals. They are quickly overwhelmed by the entirety of what they've done, which is complicated by the involvement of two genuinely hard-edged local gangsters who've horned in on their deal.

As I said, it feels like the series runs out of gas before it reaches its conclusion, but it rallies in the final episode for a nice touch of suspense and an authentic sense of grounded reality. Nicely done. 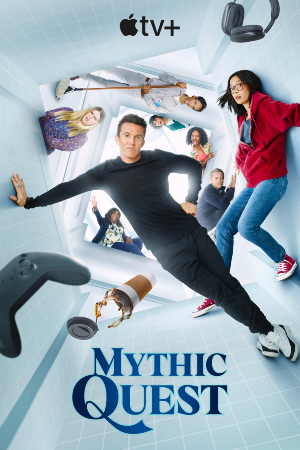 Initially, I was not drawn into the fictional video game universe that serves as the background for the workplace comedy. Since I'm not a gamer, it wasn't easy for me to find any familiar foothoods into the caustic world created by Charlie Day, Megan Ganz and Rob McElhenney.

Gradually, however, the incessantly witty banter wore me down, and I was truly won over by two episodes (one in each season) that pointed to the warm hearted origins of the lead players. Mostly, though, this is a show that made me laugh a lot, even as I began to realize that some of the characters resemble people I've worked with in the distant past.

For the new season, some characters have said goodbye, but most have returned, albeit in somewhat different roles in the video-game companies' universe. Stories still revolve around Ian Grimm (Rob McElhenney) and Poppy Li (Charlotte Nicdao), which is good, even though they are now working at their new company.

Still, I'm positive that I am missing many, many jokes that gamers and tech people will get that I never will. What keeps me watching is that the show has genuine affection for its characters, allowing them to keep growing and changing as they do so -- but not too much! No sense robbing the show of its lively and friendly (ultimately) chemistry, which is its best asset.