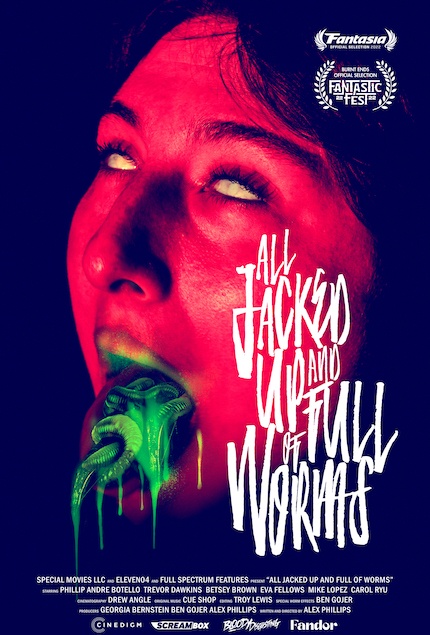 The pantheon of films about imagined illicit substances is varied and wide. First time feature director Alex Phillips throws his hat into the ring with his avant horror buddy trip, All Jacked Up and Full of Worms.

This story of a pair of nobodies caught in their own independent downward spirals colliding and bonding over a newly found addiction to hallucinogenic worms is disturbing, disgusting, demented, and occasionally delightful in its complete abandon of taste and logic.

In the course of his daily work, Roscoe comes across a stash of worms that do more to open his reality than anything his weirdo girlfriend has tried, and he goes on a bender, sucking Benny into his vortex and sending them both down a path of sex and violence that will not end well.

From Phillips’ own script, All Jacked Up and Full of Worms is the kind of bizarro nightmare that is definitely going to divide audiences. Its gleeful lack of logic, pitch black nihilism, and willful grossness is definitely not for everyone. With influences ranging from Cronenbergian body horror to John Waters-esque reveling in bad taste, to more contemporary waking nightmare fuel like Calvin Lee Reeder’s The Oregonian or The Rambler, All Jacked Up and Full of Worms is really going to hit the spot for a small segment of demented viewers and really repel others.

For what it is worth, Phillips’ creation is a chaotic, gross-out win for me. Though the execution certainly leaves a bit to be desired in terms of letting some of the seams show via FX, there is definitely talent at work. The use of location, creative costuming choices that tell us exactly who our characters are, and fully committed gonzo performances from each member of the limited cast, All Jacked Up and Full of Worms uses its resources wisely.

Viewers with more delicate sensibilities would do well to steer clear, but if experimental trash is your thing, All Jacked Up and Full of Worms could be just the thing to scratch that very gross itch.

Review originally published during Fantasia in July 2022. The film is now streaming on Screambox.

More about All Jacked up and Full of Worms