Review: OLD MAN, Respect Your Elders, Or Else

A ferocious Stephan Lang and a meek Marc Senter star in director Lucky McKee's newest film, so you know there's more than meets the eye. 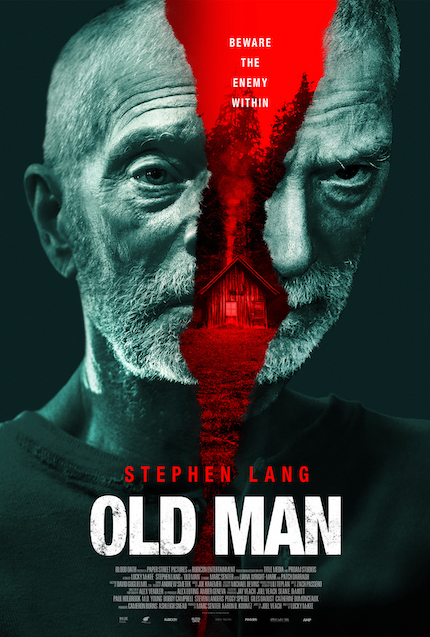 Appearances can be deceiving.

In this case, the combined talents of Stephen Lang in front of the camera and director Lucky McKee behind the camera are what caught my eye. Lang first leapt out at me in Michael Mann's Manhunter (1986), where his performance as a dogged journalist (who was also a muckraking reporter) demanded my attention.

An experienced stage veteran by that point, Lang entered my consciousness as a man in his 30s who knew his way around life, and his steady string of precise, controlled, and explosive performances thereafter have kept him on my radar for the past 35 years. Director Lucky McKee drew everyone's attention with the devastating May (2002) and has continued to demonstrate his ability to make the most of whatever budget he is working with and to maximize the dramatic talents of whoever is in front of the camera, usually in the horror/thriller vein.

Thus, the prospect of a two-hander revolving around Lang as an old codger living by himself in his wood cabin and his encounter with a lost hiker (Marc Senter) in the woods definitely intrigued me. What could McKee make of this?

The opening scene made me question my decision to watch. The titular Old Man wakes up suddenly one morning, muttering to himself and calling out for someone in the cabin. Is it another person? An animal? A ghost? Has he lost his mind? Oh, boy. My father had Alzheimer's, so I immediately lowered my expectations and poured myself another cup of coffee.

Then came a knock at the door and my attention remained riveted to the screen for the remainder of the picture. That knock signals the arrival of Joe (Marc Senter), who claims to be a lost hiker, and prompts a startling, ferocious response by the Old Man.

Written by Joel Veach, the fiendishly clever screenplay may seem to be wandering about, but it is actually speeding to its destination, even though we don't know what that might be. Lucky McKee does, though, and so does Stephen Lang, and it is Lang's frightening performance that compels notice, bolstered by McKee's assured direction, which enhances the story beats.

McKee adds other visual ingredients into the 'two men locked inside a cabin' scenario to help flesh out the arresting story and Lang's berserk Old Man, which may remind of his fiery turn as The Blind Man in Don't Breathe (2016), but this time, he's even more intense, which you have to see to believe.

Old Man eclipses its premise and cooks up a very satisfying meal for genre fans.

Do you feel this content is inappropriate or infringes upon your rights? Click here to report it, or see our DMCA policy.
Lucky McKeeMarc SenterStephen LangUS