Frost
The film is now available on digital platforms and Blu-ray via Cleopatra Entertainment.

Of course, pregnant women can't stay in bed and wait for their baby to be born! (Unless medical needs required such a course.) That thought crossed my mind, however, while watching Frost, directed by Brandon Slagle, which presents a worst-case scenario in aching detail.

Devanny Pinn, who also produced, stars as Abby, who is pregnant -- make that very, very pregnant -- yet desperately wants to reconcile with her father, Grant (Vernon Wells), who has been out of her life for the past five years and now lives in an isolated cabin. She decides to make a trip up into the woods to meet him, despite the forecast for an impending storm.

Once there, after a tense dinner, she starts to make headway in her hoped-for reconciliation, so she accepts Grant's invitation to spend some time fishing before she returns home, even tossing Grant the keys to her car. This proves to be their undoing, since Grant has not been driving much lately, and he veers off the road, entrapping them both in the car as it teeters near a cliff.

Finally, Grant is able to free himself, but must leave Abby behind, pinned to her seat by splintered tree limbs as the temperature begins to drop and the aforementioned storm is approaching. No spring chicken, Grant must walk miles down the treacherous mountainside through thick brush to find help. Of course, he asked Abby to leave her cell phone behind in the cabin to limit disturbances, so no help is coming from that direction. And who knows what evil lurks in the woods?

Unlike many films released during November, Frost is not a horror film, per se; it's much more a survival drama. Considering Abby's predicament, though, it's impossible not to contemplate the horrors of being stuck alone and unable to move, with a little monster in your belly, growling to come out. Abby's increasing desperation is captured in an empathetic manner by Devanny Pinn in a completely committed performance.

Based on James Cullen Bressack's story and adapted for the screen by Robert Thompson, Frost eventually paints itself into a corner that it is not able to resolve in a satisfactory manner. Until then, it's a mentally grueling trip into a waking nightmare, even for those of us who are not planning on getting pregnant any time soon. 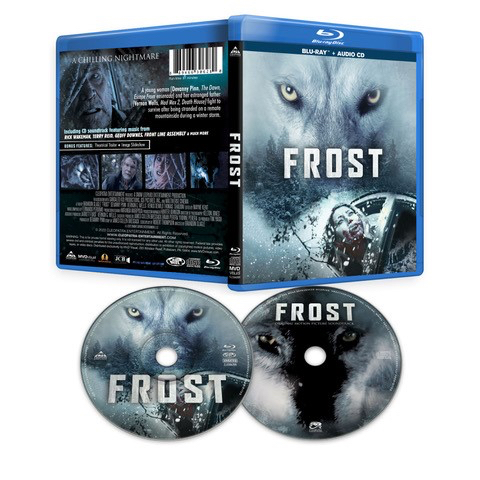 Do you feel this content is inappropriate or infringes upon your rights? Click here to report it, or see our DMCA policy.
Brandon SlagleDevanny PinnUSVernon Wells