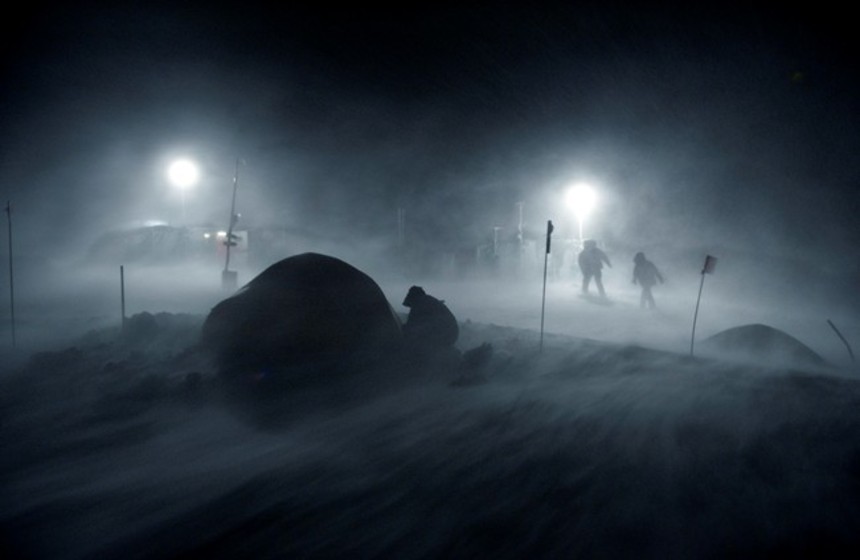 Aside from a couple of titles Iceland's not exactly known for its horror movies. Even though our folk tales are ripe with monsters, ghosts and ghouls local filmmakers have never looked at horror as something to pursue or be particularly proud of, I chalk it down to arrogance mostly.

Producers Julius Kemp and Ingvar Thordarson are basically the only ones who can see the potential in genre fare and their Reykjavik Whale Watching Massacre (aka Harpoon) is now the most distributed Icelandic film in history. Why? Because it's horror and horror sells very, very well.

The production duo along with director Reynir Lyngdal is now back with another genre film, a found footage horror/sci-fi mashup that has lofty goals and fantastic surroundings to play in.

Frost tells the story of a couple in love. She is doing research on top of a glacier, he is a documentary filmmaker visiting his girlfriend who he hasn't seen in a while.  Little does he know that the day before he arrived she had discovered something strange inside an ice cave, weird noises and lights that produce nose bleeds and weird behavior in those around it. For some reason she tells no one (why do people do that in movies?) and the day the boyfriend arrives the whole team goes missing. Go figure.

Alone and isolated on top of the glacier the couple are stuck in the camp site with only the harsh weather and darkness to keep them company. Slowly, oh so slowly things start to get weirder as creepy sounds and rumbles emanate from the icy ground below them and those strange lights make an appearance along with lost crew men returning in a catatonic state.

What is it that these scientists have awoken? Pissed off elves? Aliens? Monsters? All of the above? Will somebody ask the camera man to stop filming but he won't because the world needs to know? You bet your ass.

Frost is director's Reynir Lyngdal's second feature and quite a leap from his romantic comedy debut Our Own Oslo. Here he had to battle a short prep time (took over the project a few weeks before shooting began), severe weather on top of a real glacier and a script that feels unfinished.

The biggest problem is that the film never seems to know what's going on and the same can be said about us the viewer. It's fine when the filmmaker wants to be ambiguous but when they clearly haven't thought the whole story out it becomes a problem. Things start to feel like they were afterthoughts or created during post to try and piece together a coherent story.

One of the biggest complaint people have with found footage films is the shaky cam, some do it better than others and some are all over the place. Frost belongs in the second category. Never slowing down, the camera is constantly looking for the correct focus, even when it's sitting on a table, never allowing the viewer to take a break from the motion sickness inducing chaos that's been going on. It's not until the very end that we finally get to catch a welcomed breath. Frost is like a roller coaster ride, not the fun and exciting kind but the kind where you are waiting to get off because it's just not fun anymore.

The good things about Frost is the setting, set design and sound. You can't really beat the real thing, a real glacier with real weather that add realism and danger to the story. The sound design is also one of the best part of the movie along with composer Ben Frost's minimalistic music cues.

It's a damn shame that the stories we heard of the adventure of making the film are more exciting than the finished product and it's a shame that this experiment ultimately failed in my opinion but I hope Icelandic filmmakers will continue to try their hand at genre filmmaking because we need diversity in our industry.