Now Streaming: In THE PERIPHERAL, The Future's Not So Bright 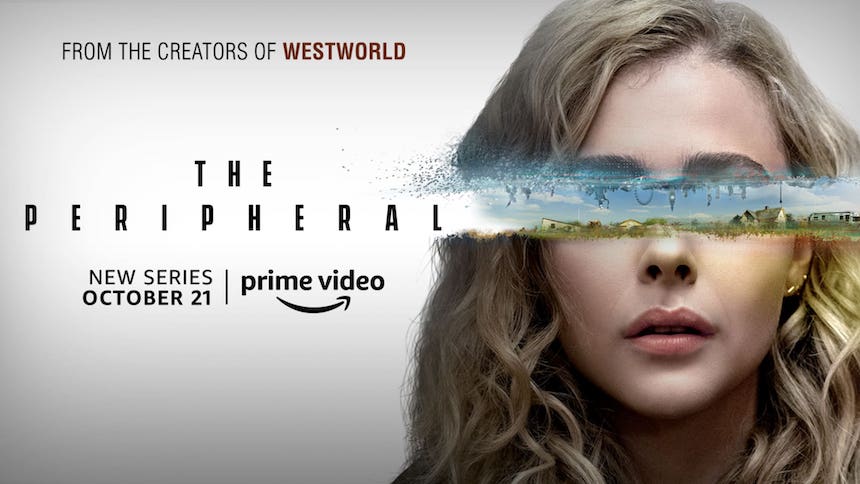 The future is not what it used to be.

The Peripheral
The first episode of the eight-episode series is now streaming worldwide on Prime Video. Subsequent episodes will debut weekly. I've watched all six episodes that were made available for preview in advance.

Created by Scott B. Smith (A Simple Plan, The Ruins) from a novel by William Gibson, first published in 2014, the series teases a view of London at the end of the century (2099) that is extremely dire, i.e., you wouldn't want to live there.

That quickly gives way, though, to an establishing shot of the Blue Ridge Mountains (Clanton County, South Carolina, U.S.) in 2032, where we are introduced to Flynne (Chloë Grace Moretz), a likable young woman caring for her blind and dying mother in a trailer in their tiny community that is populated mostly by losers and drug addicts. Flynne's older brother Burton (Jack Reynor), a military veteran, relies upon Flynne's talented expertise with virtual-world gaming in order to help him earn enough for the family to skimp by.

Naturally, there are bullies. Never fear, though. Burton's former military comrades, all close friends, remain rooted in the community, so they are on constant alert to help and support each other, no matter what trouble may arise. This comes in handy before the end of the episode, and also plays a key role as the episodes roll by in an increasingly compelling manner.

One day, Burton accepts a well-paying gig to beta-test a new virtual-world game and, as usual, calls upon Flynne to strap on a headset to play as his avatar. Like a drug, Flynne's first experience feels so stunningly real that she is instantly hooked and readily agrees to continue beta-testing. It's the second time that the heat and intensity instantly zooms upward, plunging her into a very dangerous scenario that is not as "virtual" as she (and Burton) thought.

Since it's a small community, it's inevitable that others will become involved, and that includes Burton's military-veteran buddies, as well as Flynne's kick-butt BFF Billy Ann (Adelind Horan), who is married to likably feckless Jasper (Chris Coy), who is the nephew of menacing and ambitious local kingpin Corbell Pickett (Louis Herthum), and yes, it all ties together quite nicely as the story moves forward.

The series also sways back and forth from the Blue Ridge Mountains to future London, especially with a small group of key characters who have a keen interest in Flynne and her activities, and enable her mind to time-travel (in effect, if not in fact) to their time period and utilize a body (or "peripheral") that they've created for her to use. Of this group, Wilf (Gary Carr) is the galvanizing member among them, even though he may not always appear to be as tough a leader as needed.

They are all in search of Aelita West, who appears the second time that Flynne plays The Game That Is Not a Game, and then promptly disappears, to the bitter anguish of the London 2099 group, adding to their desperation.

It all sounds more complicated than it plays. Scott B. Smith, who wrote the first three episodes and serves as showrunner, structures the series so that it's filled with action, yet also allows for the characters to be fleshed out, with sufficient initial intel provided to generate interest that is then elaborated upon when the time is right.

The overriding narrative imperative -- the survival of the world -- enhances the propulsive nature of the plot, without drowning it in apocalyptic dread. There's enough of that dread, though, to spice things up and periodically remind everyone of the stakes involved.

Vincenzo Natali, who brought his idea for adapting the book to Westworld creators and producers Lisa Joy and Jonathan Nolan, directed the first two episodes and establishes a good template for the other helmers to follow. All six episodes flow beautifully from one to another and gradually reveal more of the world, simultaneously introducing new characters to fit into the flow and/or bump things around like unexpected, giant bursts of wind that catch people off guard yet make perfect, logical sense.

Chloë Grace Moretz plays Flynne as a modest young person who does not yet realize their own capacity. She's still learning about herself and about her own capabilities, which makes her the perfect stand-in for the viewer as we learn about a possible future that no one should want.

Do you feel this content is inappropriate or infringes upon your rights? Click here to report it, or see our DMCA policy.
Chloë Grace MoretzGary CarrJack ReynorPrime VideoUSWilliam GibsonDramaSci-FiThriller