Toronto 2022 Review: THE WOMAN KING, A Grand Epic of Women in Action 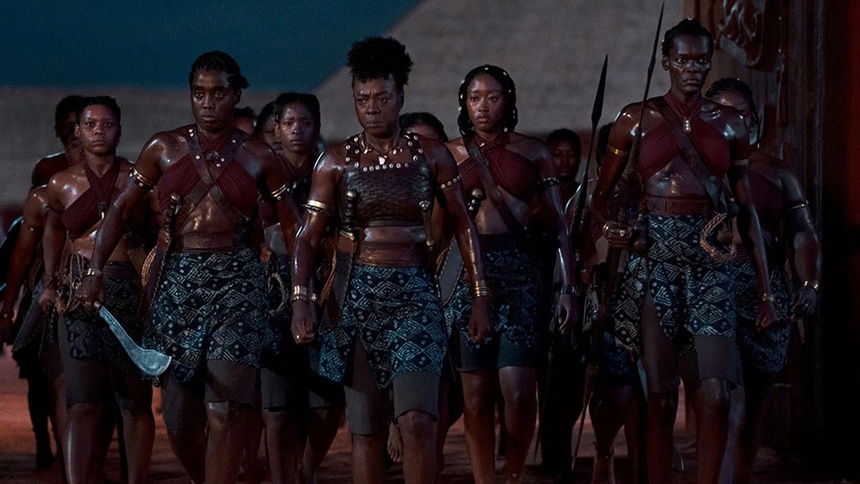 It's the early 19th century in West Africa. Various tribes are trying to survive in the continuing onslaught of colonialism and one of its nastier components, slavery. While white people are still controlling the trade, sadly, some tribes 'sell' their prisoners of war as trade, a practice condemned by many in their number. But one tribe has a secret weapon: the Agojie, a group of elite women warriors tasked with protecting Dahomey and its King. As new recruits join their ranks, both external and internal conflicts threaten the kingdom and the warriors.

That's the plot in a nutshell for the latest film from Gina Prince-Bythewood (Love & Basketball, The Old Guard), an epic tale of action, drama, and a few hints of romance. The Woman King holds nothing back in style or substance as it tells its legendary tale. If you like tales of freedom fighters, the rise against imperialism, and some kick-ass women, this is the film for you.

General Nanisca (Viola Davis) will stop at nothing to defeat the enemies of her people; luckily, she, her fellow warriors, including Izogie (Lashana Lynch), Amenza (Sheila Atim), are highly skilled and highly deadly. It's not lost on other tribes that they are being defeated by women, but their own tribe cares not. Such as life is not without drawbacks, such as isolation from the rest of the city. But it also comes with freedom and independence, being heard in a way that other women are not. King Ghezo (John Boyega), despite his many wives, has no trouble listening to Nanisca's counsel. Enter Nawi (Thuso Mbedu, The Underground Railroad), a girl who refuses to marry an abusive old man and finds her future with the warriors - if her skills can match them, and if she doesn't fall for the handsome Malik (Jordan Bolger).

Prince-Bythewood gives us the plot we need to infuse the story with depth, taking time for us to see the differing personalites, connections and conflicts - as much as conflict against oneself as the enemy. It follows something of a standard montage/student learning the ways of the fight with Nawi, but every moment of this is enjoyable, as we know what they are fighting for: not only their people, but for the right of all of them to not be taken across the ocean.

We can see the delicacy of diplomacy and how it quietly infuritates people like Nanisca, the ones on the litera; ground who have to clean up the mess. Scars visible and invisible are marked across her and the other's skins, as the deeds and failures of the past are constantly haunting them. Prince-Bythewood also provides the necessary historical context, showing how even this seeminly small conflict plays out on a world stage that was still refusing to let go of its vices.

But make no miskate, this is an action film, and as Prince-Bythewood proved with her previous film, she knows how to give us action. One of her talents (with that of her team) is making us feel not just that we're in the action, but we're performing it. We can see the gracefulness of Nanisca as she brings her sword down, of Izogie as she dances around her prey, of Nawi as she learns that yes, indeed, a rope can be a weapon - but we have seen and understood the work that goes into performing these actions. The sound design has us hear skin slice as if we're the ones doing it, placing us in both the observer and executor place, which makes the blood pump as you watch.

This is matched by the gorgeous production and costume design, and Prince-Bythewood puts everything on a grand scale, even the intimate moments - we're meant to feel and be enthralled by it all. If it sometimes dips into melodrama, we can allow it - it is an epic, after all, and a story that demands to be told. And at the centre of it all, Davis holds like an anchor, a sharp blade of steel still hot from the forge, even as she attempts to find some tempering.

The Woman King might on occasion follow something of a formula, but it's used to great effect, with terrific action, great performances, and a hefty story told with a deft hand.