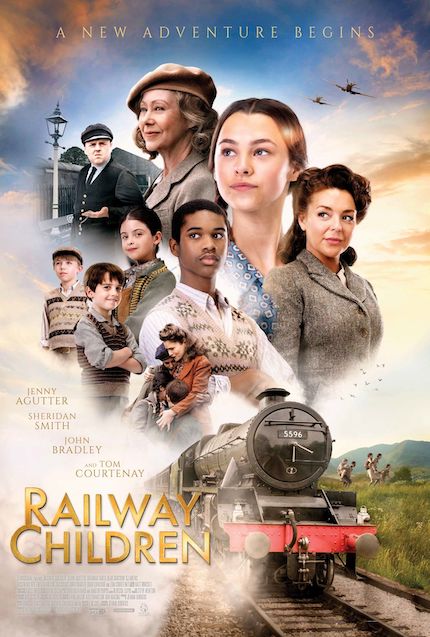 Pity any parent who must decide to send their children away from home for safety's sake.

Buoyed by the idea of Jenny Agutter's taking a role in a new adaptation of a story in which she has appeared thrice before -- first in a 1968 television series; then in Lionel Jeffries' 1970 film version, which I thoroughly enjoyed when I finally saw it a couple years ago; and most recently in a 2000 TV film -- I was curious to see what drew her interest again.

The story itself dates back to a novel by E. Nesbit, first published in 1906, which follows an affluent family whose fortunes change after their father is accused of being a spy. They move from London to Yorkshire in northern England and must adapt to their new lifestyle. The 1970 film version kept the same major plot elements in its narrative and manifested an appealing, plucky attitude.

Moving the story to wartime Britain, the new adaptation starts with a mother saying goodbye to her children in June 1944. Feeling compelled to remain in Manchester in order to continue serving as a nurse, she has accepted that the children will be safer in the Yorkshire countryside, as part of the third wave of children evacuated by the British government, following German air attacks upon major cities in England.

Following her mother's insistence that they all stay together, Lily (Beau Gadsdon), 14 years of age, takes charge of her younger siblings Pattie (Eden Hamilton), 11, and Ted (Zac Cudby), 7, until they are finally accepted into the kindly embrace of Bobbie (Jenny Agutter); her schoolteacher daughter Annie (Sheridan Smith), and her grandson Thomas (Austin Haynes), 13.

To be accurate, Annie acquiesed to her mother, so she is reluctant about the additions to her houshold, but her son Thomas appears happy to have temporary siblings, and gladly shows them around. To escape unkind bullies, Thomas even allows them entry into his secret hiding place, an abandoned railway engine and transport carriages. It is there that Lily discovers Abe (KJ Aikens), a very young American soldier who has been injured, yet claims to be on a secret mission and is hiding out.

Lily may only be 14, but she's a smart and enterprising girl. Soon enough, Lily puts two and two together: Abe, who is Black, is actually hiding from American MPs, who are searching for a soldier they claim has deserted. Now, what to do about it?

Directed by Morgan Matthews, an experienced documentary flmmaker with only a single previous fictional narrative, A Brilliant Young Mind (2014) on his resume, the film is initially bathed in golden hues, as captured by the talented cinematographer Kit Fraser (Under the Shadow, 2014; Shadow in the Cloud, 2020). From the point of the discovery of Abe, though, the film takes on a more varied palette. It's never swamped by darkness; instead, the golden hues shade toward sunset, as if to reflect the approaching dangers.

Indeed, the narrative also gains urgency from that point onward. To be clear, it never becomes a breathless thriller, or even anything that's not suited for an all-ages audience. But, yes, the pace picks up gradually as the stakes are raised.

Beau Gadsdon acquits herself admirably in the lead role, portraying a young woman of confidence and determination that belies her years. The film benefits as a consequence, blosoming into an entirely enjoyable entry in the wartime, family-friendly British canon.