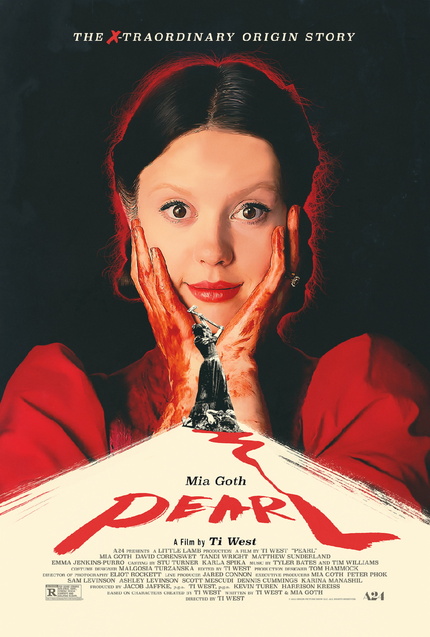 After rededicating himself to horror with this spring’s marvelous sexy slasher X, Ti West is already back with Pearl, exploring the origin of the previous film’s deadly romantic killer. Where X reveled in the slasher aesthetic made so popular in the early ‘80s, Pearl leans more toward West’s early ‘10s horror slow burns with oodles of stylistic flourish and a show-stopping performance from co-writer/star Mia Goth.

When we encountered Pearl (Goth) in X, she was already an old woman. Her fragile visage seemed little more than a shadow of a person, that is until she goes on a killing spree. This prequel takes us back to 1918, in the midst of World War I and the Spanish Flu pandemic, a horrific combination of tragedies that were responsible for the loss of hundreds of millions of lives.

Pearl is living on the family farm, her parents having fled Germany years before, while she awaits the return of her husband Howard from the trenches overseas. Isolated, subjected to her mother’s harsh demeanor, and stuck caring for her invalid father, Pearl is trapped, but she sees a light at the end of the tunnel. She wants to be one of those girls on screen at the picture show, and she’ll do anything to get out her sleepy south Texas town, no one is going to stop her.

Presented with few opportunities to keep her loneliness at bay, Pearl throws herself into her fantasies. Her desire for big screen stardom leads her to an affair with the local projectionist, he’ll let her see all the movies she wants, and the romance of the flickering lights mesmerizes her. Meanwhile, when her sister-in-law, Mitzy (Emma Jenkins-Purro) tells her about an audition for a traveling chorus line that could take her all across the state, Pearl becomes obsessed with the thought of flying away from her humdrum life, but not everyone is so keen to let her go.

Already a little off, the obstacles presented by her parents and others who don’t see her the way she sees herself, Pearl sets out to clear the path to success, and sometimes that needs an axe.

Pearl’s Spanish Flu setting makes for a pretty blatant metaphor with our modern pandemic life. Characters are frequently seen wearing masks, Pearl’s mother admonishes her to be careful when running her chores, lest she bring home the bug, and if that wasn’t enough, the projectionist goes so far as to mention how difficult it is to know who anyone really is “with all these masks people are wearing.” Little does he know that the mask Pearl wears is about to disintegrate, showing her true colors to anyone unfortunate enough to doubt her future stardom.

At first, we are presented with a dutiful daughter going about her daily life, but even before the opening titles, we see Pearl take a pitchfork to an innocent duck and gleefully feed it to her alligator friend, a sign that there’s trouble beneath the surface. The Technicolor-esque color palette, the Bernard Hermann-esque score, the Busby Berkeley-esque dance sequences, they all reflect Pearl’s growing delusion in a way that comes to gruesome fruition in a brutal third act that really delivers on the promise of the character.

Goth’s performance as Pearl is a stunner. As the killer in X, Pearl’s inner life was only explored in bits and pieces, but the West/Goth script really fleshes out the character. With the intimate understanding that comes from being not only the actor, but also the writer, Goth embodies this character and makes Pearl her own. There is a monologue sequence where Pearl opens up to Mitzy about the obstacles she’s faced and her feelings about the way she’s taken them on that shows a range that I didn’t know Goth had. It’s a tremendous piece of acting, and one that should get Goth the kind of recognition I don’t feel she’s received in the past.

There is a lot that is unusual about West’s new franchise. He moved from a standard – though excellent – slasher with X to this more contemplative horrific character study, he’s used each film to surprise-announce the next (the end credits of Pearl tease the ‘80s set MaXXXine, following Goth’s survivor from the first film), and he’s already covered a wide swath of styles in just these two features. This is the Ti West we’ve been waiting for, a filmmaker who knows his history, understands style, and exploits both to his and the audience’s benefit. I could maybe do without the clunky Covid metaphor, but it’s a minor quibble in an otherwise stellar film.