Review: CLERKS III, A Requiem For The Askewniverse 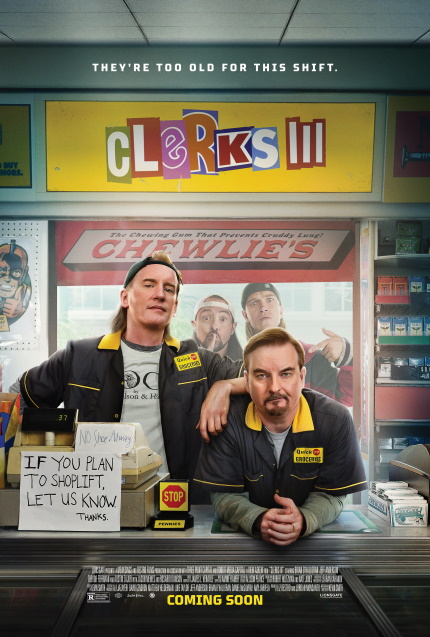 It’s been a long road for Kevin Smith. His 1994 low-budget slacker comedy Clerks made him an immediate star in the indie film world, status that he would harness to spend a decade making bigger and more ambitious projects. But no matter how much he tried to spread his wings, it was the world of Clerks that has defined him as an artist for the last twenty-eight years. Sequels, spinoffs, an animated series; this has been what the world wants from Kevin Smith, and with his latest entry, Clerks III, he is trying to close the book on this part of his career, but is it the sendoff the fans want?

It’s present day, and almost thirty years later Dante (Brian O’Halloran) and Randal (Jeff Anderson) are still posted up at the Quik Stop convenience store. Now owners after having purchased the store in Clerks II, the duo are pretty much back to the same place they started, just with more responsibilities and emotional baggage. This is a pair of grown men, now fifty, still closing up shop to play hockey on the roof, still dealing with the same asshole customers, still grousing about their lives, and still stuck.

When Randal suffers a near fatal heart attack, it awakens a passion in him that he’d long since forgotten. He is going to make a movie, one about life working at the store, and he’s going to need everyone’s help if it’s going to happen. Cue the cameos.

Damn near every surviving member of the original Clerks cast shows up to help, a boon to longtime Askewniverse obsessives who refuse to let these characters die. In the process of casting, Smith even wrangles most of his famous friends to audition for Randal’s epic autobiography, everyone from Fred Armisen and Sarah Michelle Gellar to Mallrats star Ben Affleck shows up in what is perhaps the most self-glorifying scene in a film packed with indulgent moments.

When the film finally begins shooting, it becomes very clear what is happening, Randal is making the Clerks we all know and love. Meta on meta on meta.

While there are clearly emotional stakes here, Dante deals with a very personal loss throughout the film and Randal rediscovering a joie de vivre he’d long since forgotten, Clerks III feels more like a variety show than a film. Its frequently undercooked drama is amateurish, performances are somehow even more stilted than they were in 1994, and it lacks a narrative cohesion or consistent style that should come from years of working on the craft. It feels like a home movie, which was charming when Smith was an amateur, but as a pro, this is disappointing.

There’s nothing particularly engaging about Clerks III, Randal’s mid-life crisis feels forced and lazily constructed, the craft of the film is severely lacking, it’s really only Brian O’Halloran’s performance as Dante that saves it from being a complete disaster. O’Halloran shows some real chops as Dante deals with multiple crushing personal losses and watching his best friend barrel through life without regard to those he may be affecting. It makes sense, Clerks was always Dante’s story and Randal was always trying to steal it. Here it is no different, but now the story is getting stale, and it feels like even Smith can’t find ways to spice it up anymore, leading him to essentially remake the film that made him famous and relive his glory days.

Much like the characters in Clerks III, Smith seems stuck in the past. As a filmmaker, I give him credit for taking chances over the last decade, even though they’ve not often worked out. Clerks III feels like him giving up, recognizing that the Clerks universe is what the world wants from him and shoving it back in their faces. For fans of the series, there are bits and pieces to enjoy, but as a film it leaves a lot to be desired.

Do you feel this content is inappropriate or infringes upon your rights? Click here to report it, or see our DMCA policy.
Brian O'HallaranJeff AndersonKevin SmithUSBen AffleckSarah Michelle GellarRosario DawsonComedy