Darren Foster's true crime documentary reveals the hidden and ridiculous side of the opioid crisis. 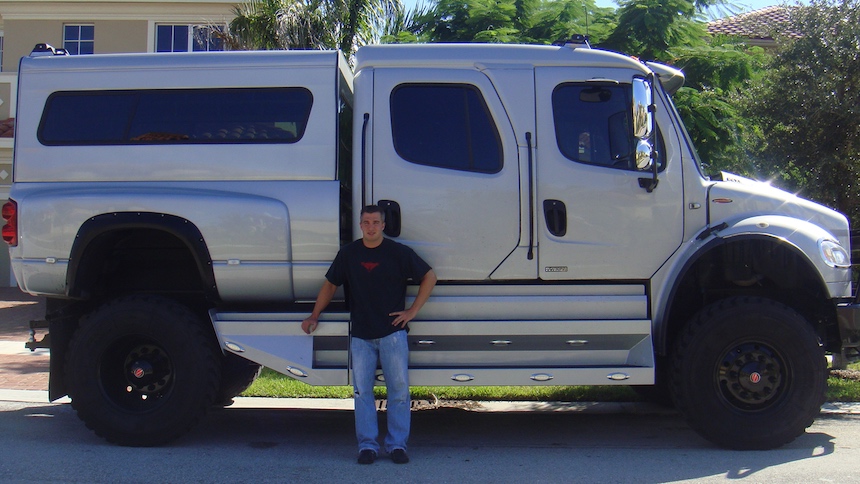 Investigative documentarist Darren Foster found an intriguing angle on how to serve true crime in his latest work, American Pain, which premiered at Tribeca. Foster focuses on a sibling duo of Jeffrey and Christopher George that perverted the concept of entrepreneurship and ruined countless lives in the process by reckless pill-pushing. The hulking brothers built an empire of pain clinics in Florida, becoming "the kingpins of the largest oxycodone trafficking network in U.S. history".

Foster introduces the partners in crime through giddy reminiscences of their closest ones, family members, partners, and colleagues. They all laugh at the Georges' exploits as kids, adolescents, and into adulthood. Both brothers are introduced through a trove of family photos as their absence has a rational reason: they are jailed for their latest entrepreneurial exploit. However, Foster managed to make several interviews with them as their served jail time, though neither of them acknowledge the damage they unleashed on people. Instead, they keep bragging about the millionaire lifestyles they led.

American Pain reveals one of the bigger cogs in the machine that fueled the widespread Opioid crisis. The behind-the-scene peek explains how lax legislation enabled the two not-so-sophisticated brothers to grow a large network of pain clinics in South Florida pushing an enormous amount of pills. As a counterpoint to the family´s grinning recounting of the twins' latest exploit, Foster features police authorities and local reporters investigating unusual swarming and increased mobility around the Georges' pain clinics.

American Pain offers a schizoid portrait. While family, friends, and associates depict the George twins as entrepreneurs living the millionaire lifestyle of excess with expensive cars and helicopter rides to Burger King, the authorities paint a picture of fraudsters pushing pills wildly and contributing to the Opioid crisis. Foster utilizes the tension of the double portrait to mold the true crime genre in a hippier direction.

From the formal point of view, American Pain checks all the genre tropes: introducing culprits via their previous history, featuring talking heads segments of the witnesses and people in direct contact with the central duo, soundbites of the culprits, found footage compiled to reconstruct the criminal activity, and the prosecution. Where Foster goes off the rails of the true-crime ilk is the style.

Foster's documentary has the sunny vacation vibe of Florida but more importantly, the film carries the ridiculousness that colors many news reports in the late period (framed by the exploits of the former U.S. President). From the beginning, Foster´s film does not brandish the severity amounting to the Opioid crisis. It veers toward a MTV-style girls-gone-wild frolicking of two jocks. None of the brothers' associates acknowledged their wrongdoing in one of the largest health crisis; the testimonials of authorities put the pill-pushing into the context of the crisis and the terrifying fallout.

The spring-break vibe and the in-your-face obliviousness of the close colleagues and family members to what the two brothers had truly orchestrated, in pair with you-have-to-see-it-to-believe-it revelations like helicopter rides to Burger King or MRI examinations in a parking lot of a strip club,  steer American Pain to mockumentary territory. It is almost like American Pain is an American Vandal of documentaries.

However, Foster provides proof for even the craziest claims that cements the film's zeitgeist, driven by outrageousness. It is a bit of a risky maneuver, since it threatens to mitigate the true and terrible impact of the so-called pain clinics and to tone down the portrait of the central siblings from callous criminals to silly fellows. Yet the documentary stands in contrast to the widespread reporting on the Opioid crisis that filled out the news for several years and the massive toll.

It also demonstrates how even insignificant players such as Jeffrey and Christopher George in the face of the pharmaceutical industry were able to incur enormous damage and rake in millions. To imagine the numerous deaths that fuelled the infantile and wasteful lifestyles and the ignorance and enablism of the people in the twin's orbit is abject.

And most importantly, American Pain is a testament to the shortcomings of liberal capitalism on the verge of anarcho-capitalism. And explaining in terrifying showcase why regulations are crucial as a mechanism of checks and balances protecting the free market from become a killing runaway train.

Do you feel this content is inappropriate or infringes upon your rights? Click here to report it, or see our DMCA policy.
American PainDarren FosterdocumentaryTribeca 2022US