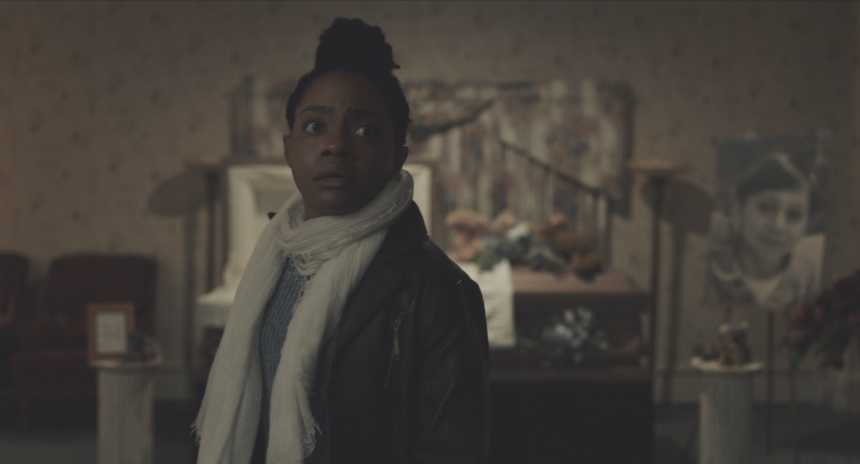 If there’s one thing that has shown the interconnectedness of humanity in the last few years, it is the global Covid-19 pandemic. While responses may have been different in different regions, virtually every person on the planet was forced to stop in their tracks in March of 2020 and reconfigure everything about the way they lived their lives. It has changed the way we interact with one another, and it has exposed people both literally and figuratively to both the best and worst in each other.

It was inevitable that art from this time would come to reflect a new reality, though I would be lying if I said I wasn’t dreading the inevitable influx of Covid isolation themed films. Though there have been the rare successes that have exploited the new reality in incredibly effective ways like the early Covid surprise hit, Host; the vast majority of Covid themed films have all felt very same-y, and that’s boring. Thankfully, Host is not alone because we can now add Andy Mitton’s The Harbinger to the short list of films that understand and utilize this crisis in a new and novel way that will thrill horror fans.

The Harbinger tells the story of a very diligently isolated Monique (Gabby Beans) who finds herself forced to leave her family bubble to help her college friend Mavis (Emily Davis) who is in the midst of a personal crisis. Mavis is having nightmares from which she can’t awaken, and each night a dark figure tells her that her time is running out. These are no normal nightmares, though, they can last for days at a time, and the figure grows more menacing with each passing appearance.

Monique isn’t quite sure what to make of it, but in an attempt to humor her friend at a time when she’s most vulnerable, she creates a Reddit post with some details and connects with a Zoom demonologist, who has some insights. Wendy (Laura Heisler), identifies the demon – who has no infected Monique’s dreams as well – and gives the pair a very grim prognosis. This demon, it seems, can not only frighten its victim, but also rip them from the memories of those around them, essentially erasing their entire existence. The pair must fight back before they disappear completely, but it won’t be easy and it may not be successful, The Harbinger is coming for them.

While there are a number of things that affected people on a practical level during the ongoing pandemic crisis, the absolute isolation of the initial phase of global lockdowns was particularly traumatizing for many. Many never interacted face to face with another person for weeks or months, essentially disappearing from the face of the earth apart from the occasional video conference if you were fortunate enough to have the tech and the friends to do it. Even worse, many of the pandemic’s earliest victims died in solitude, either alone at home, or in hospitals where their loved ones were unable to comfort them in their final hours.

The Harbinger explores these issues and the fear of being forgotten in a world where fear was all we had for a while. It’s a smart, contained story that will certainly anchor itself in time with its vivid paranoia and character conflicts regarding masks, “personal freedom” and the like, but it deals with issues that will outlast the pandemic. Oh, and it’s scary! The idea of a dream stalking demon isn’t new, but the means and methods here are. Shaped like a plague doctor with the extended nose and black cloak, the lack of a face means that anyone or anything thing could be the tormentor, further obscuring a path to survival, a path which becomes more dangerous with each night the passes.

Though Beans really takes the reins with Monique, the film’s small ensemble – reflective of the Covid reality of the shoot and the world of the story – means that every actor has to bring their A-game. Beans and Davis do just that, drawing characters brimming with insecurities and fear, but also fierceness and a desire to survive. Mitton also brings in Monique’s family, brother Lyle (Myles Walker) and father Ronald (Raymond Anthony Thomas) are wonderful as the wary remainder of Monique’s broken bubble, and their presence helps us to understand her by extension.

Andy Mitton’s third feature has taken what could’ve been a trite exploitation of a global tragedy and used it to explore common fears in a fascinating way. The Harbinger will serve as a marker for horror fans of the future, a way to remind them of the fears and anxieties that are in some ways unique to the pandemic, but also the eternal fear of being forgotten. For those weary of Covid stories, this will serve as a reminder that the subject isn’t always the substance, that new stories can be told, even when topic fatigue sets in. The Harbinger is one of a very few worthwhile pandemic inspired horror stories, don’t let this one catch you sleeping.

Do you feel this content is inappropriate or infringes upon your rights? Click here to report it, or see our DMCA policy.
Andy MittonRaymond Anthony ThomasLaura HeislerStephanie Roth HaberleHorror