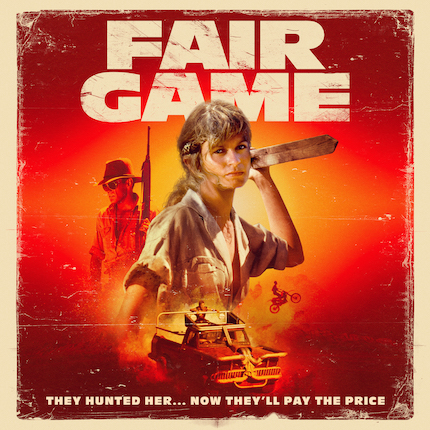 Directed by Mario Andreacchio, the revenge thriller stars Cassandra Delaney as a "wildlife sanctuary boss" who is pitted "against three psycho kangaroo hunters. Bored with killing kangaroos, they decide to kill the animals in the sanctuary, and when they see how attractive the owner is, they decide to have a little 'fun' with her, too. Turns out that they may get a bit more 'fun' than they bargained for."

Originally released in 1986, I became aware of the film after Mark Hartley's great doc Not Quite Hollywood (2008), and I'm looking forward to seeing it (finally). If it's not playing at a theater near you, Fair Game will available On Demand this coming Tuesday, July 12 via Dark Star Pictures.

My editorial colleague Andrew Mack wrote about its forthcoming release last month and included a batch of stills, so head there to feast your eyes upon those images. A better-looking official trailer has now been posted, which you can watch below.