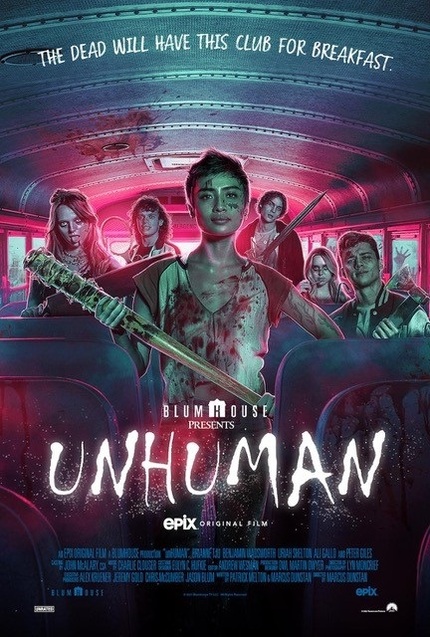 Unhuman is the latest low-budget horror film from the prolific Jason Blum and Blumhouse, and at first glance, there’s nothing particularly innovative about it. After all, there’s only so much you can do with zombie movies when that subgenre’s been around for years and almost everything has been tried with it.

Under the directing duo of Patrick Melton and Marcus Dunstan – responsible for the tasteless Feast series and a large number of the Saw sequels – this has the bare minimum of setup: a bunch of high school kids are packed on a bus for a field trip (“for extra credit” is as far as reasons go) and are very quickly preyed upon by a feral metalhead and his followers, who behave like the infected in 28 Days Later. There’s an explanation -- something something chemical attack -- but really, it’s not even necessary.

The characters all have names, but it’s best to think of them as walking teen movie tropes: there’s the Wallflower/Final Girl (Brianne Tju, whose switch to take-no-shit asskicker is effective), the More Outgoing Best Friend (Ali Gallo), the Nerd (Drew Scheid), the Dumb Jock (Uriah Shelton), the Princess/Ditz (Lo Graham), the Badass (C.J. LeBlanc), the John Bender/Brooding Loner (Benjamin Wadsworth), and the  Comic Relief Fat Guy (Blake Burt). In a way, this is bringing together decades of teen stereotypes.

And for a while, that is all this movie is: bunch of mildly annoying kids fighting off the infected while holed up in an abandoned tenement. And for what it is, it’s passable, even if Dunstan seems way too fond of slo-mo shots. But then comes the inevitable mid-film twist, which you should have seen coming, after seeing how Melton and Dunstan turned the Jigsaw saga into a convoluted mess.

The pair are clearly trying to pull a Cabin in the Woods by deconstructing teen and zombie movie tropes, but they’re not nearly self-aware enough for it to be an unqualified success. You have to give them credit, though, for playing the pivot with a relatively straight face in spite of how ridiculous it is, in the process giving this modest little flick a modicum of interest and saving it from being just another horror movie you put on to kill time and quickly condemn to the Forget It The Next Day pile.

Suddenly there’s more dimension to these brats and they prove they’re more than what they’re initially made out to be. A pretty on-the-nose ending voiceover sums it all up, and you could have easily swapped it with Brian’s writing assignment at the end of The Breakfast Club (“In the simplest terms, in the most convenient definitions”) and nothing would have changed. The few adults present are still barely functional morons, obviously.

It's a tall order to compare a movie to the John Hughes classic; and Unhuman is still a thrashy B-movie, first and foremost. But it’s trying to do something a bit different, and that’s not bad for another Blumhouse throwaway.

Unhuman is available as of today (Friday, 3 June) on various Digital and Video On Demand platforms, via Epix and Blumhouse Television.