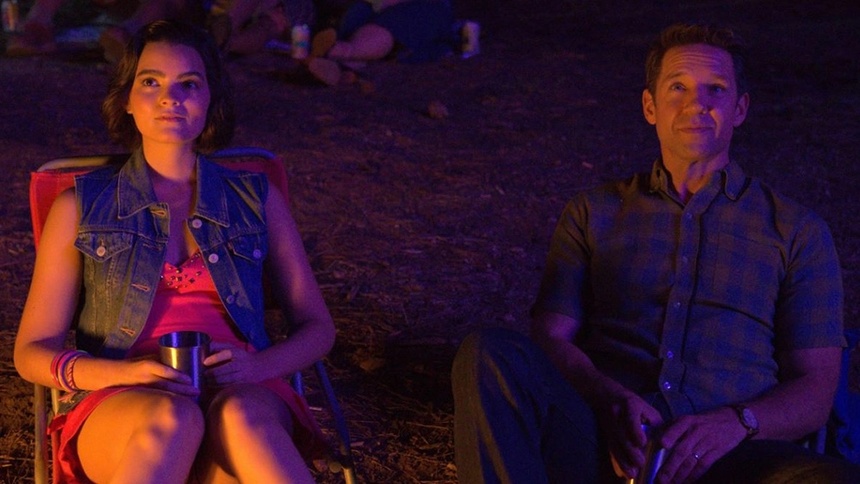 Many of us dream of being young again, or at having a second chance at first love. Many of us have a crisis in our middle age, when certain dreams haven't come true and we have to completely re-assess where our future lies. There are no end of films on these topics, and science fiction is definitely a genre in which these themes can be explored in a more literal sense.

Erwann Marshall explores the passage of time (or not) in his debut feature drama, The Time Capsule. It begins with an interest concept, an intimacy and care for its characters and subject, but sadly falls into a few too many clichés and focus on the less interesting character. Still, it offers a fair amount of proverbial and philisophical meat to chew on.

Jack (Todd Grinnell, One Day at a Time), a rising political star, has just lost an election. He and his wife Maggie (KaDee Strickland) go to his family's old home in Georgia to lick their wounds, and decide on their next move. His old friend Patrice (Baron Vaughn) tells Jack that his high school girlfriend Elise (Brianna Hildebrand) is back in town; only she hasn't been in another state, she's been in outer space. Having spent 10 years going to a colony and 10 years coming back, in hypersleep, Elise has barely aged a day, both in body and in personality and memory. For him is more than twenty years; for her, it's only a few months since they parted ways.

It begins with a languid, gentle tenderness - Jack reassessing his future in the wake of his disastrous present, in which a tiny error is magnified, Elise trying to figure out how to exist in a world that has moved on without her. It's not just about how technology has changed, of course, but how one can step out of time simply by being cultural out of touch, and even for someone like Jack, who has been around, a political like keeps you apart from the 'ordinary man'. Their teenage affair might have been brief, but it was their first love, and it's hard to resist that allure, with the joy it brings, wrapped up in all the good without the bad of the world yet to press in on you.

Jack finds himself slipping back into his 'old' personality, one that perhaps got lost in the performance of politics. But it's not long before much of this falls into a cliché, with a soon-nagging wife who insists he play by certain rules. Jack chafes at the role he built and had built, and certainly the reappearance of Elise stirs his desire for what he used to be. But we've seen this story before.

And as enjoyable an actor as Grinnell is, it's Hildebrand who lights up the screen. Jack's story is a too-familiar one of midlife crisis, while Elise's is unique and worthy of exploration. We get a bit of information - how she and her father really had to go to the space colonies for work, how they arrived and found out there was no work, how they returned to a world changed too much and with little use for them, how Elise feels about everyone she knows being so far away from her, literally and metaphorically. Who wouldn't want to know more about what she's going through? How she confronts the man she knew only a scant few months before, from her perspective, who has changed so much? She is now the stranger in the world, a much more difficult adjustment that deserved more screen time.

While it has a good concept, and there is a quite intimacy and grace to the storytelling, The Time Capsule ultimately falters, focusing on a character we're seen too often, and not spending enough time on the far more interesting character and her story.

The Time Capsule debuts on June 3rd on VOD.

Do you feel this content is inappropriate or infringes upon your rights? Click here to report it, or see our DMCA policy.
Erwann MarshallChad FiferTodd GrinnellBrianna HildebrandKaDee StricklandDramaRomanceSci-Fi