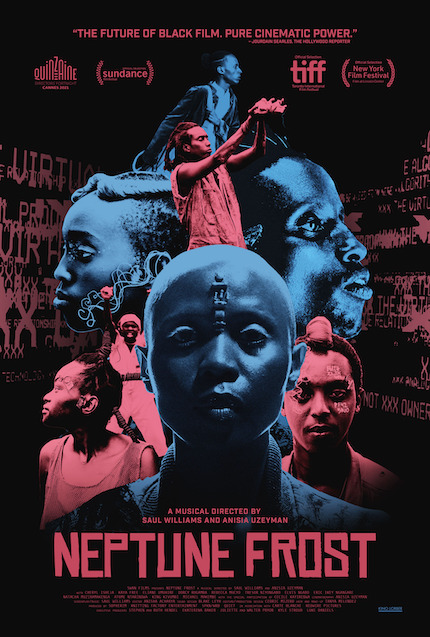 The coltan mines in the hills of Burundi supply minerals that makes tantalum capacitors used in most of world's electronic devices. Multidisciplinary artist Saul Williams (Slam) and Rwandan artist Anisa Uzeyman use the mines as a springboard to embark on an ambitious DIY sci-fi musical, Neptune Frost.

Expansive in theme -- shedding light on the continuing exploitation of the raw materials and Black bodies in the globalist economy, providing a non-binary look at current society in a continent riddled with anti-gay laws sowed by American evangelical missionaries, examining the vast network of internet warriors against hostile authoritarian regimes -- the film is an amalgamation of the Afrofuturists' utopian version of what's to come.

Matalusa (Bertrand Ninteretse) works at a coltan mine, enduring harsh, inhumane treatment with fellow miners from armed military guards. When his brother Tekno is killed by the guards, the whole camp erupts in protests with the drumbeat and their chanting becomes songs: "Hack!" becomes their motto. Matalusa flees the camp and starts his journey into a commune, protected by an invisible barrier, called Digitalisa. It's a refuge for young hackers.

Intersex hacker Neptune, first played by Elvis Ngabo then Cheryl Isheja, is also on the run and finds her way through Digitalisa. She is greeted by the members of the community with names like Memory and Psychology; together, they start discussing the disruption in the system and help Neptune become Matyrloserking, a master hacker and disruptor of normative social code. (The name comes from Williams’ French friend pronouncing MLK badly.)

Neptune Frost toys with heady ideas of colonialism, politics, history, tradition and gender fluidity in the era of Internet communication and global commerce. Instead of relying on techno-jargon to explain away the ills of society, the film instead shoots for poetic dialog, singing and rapping infused with multiple languages, and a soundscape steeped in African tradition. Always moving the camera and using vibrant colors -- Uzeyman serves as a director of photography -- along with  stunning set and costume design by Cedric Mizero, the film captures the energy and resourcefulness of the African art community.

The details and care that is put into the project is astounding. Clothing is covered in various alphabetical letters from computer keyboards and other electronics parts, representing the scraps from the end of tech's cycle that began with the coltan mines on the same continent. Use of blacklight paints and recycled bicycle wheels on mystics, and artful copper wires extending from people's hair and make-up, are further examples of placing layers upon layers of texture and subtext. It would take multiple viewings to absorb the whole world created by Williams and Uzeyman, and their team.

As the authorities' drones encroach into the camp, the hope for reclaiming technology grows, culminating in the rise of Matyrloserking from the ashes of Digitalisa.

Originally conceived as a graphic novel and a stage play, Neptune Frost has its faults: its ethereal dialog and a not well-defined narrative structure might throw people off the track. The film might lack the political urgency of Afrofuturist classics like Born in Flames, or Space is the Place, but it's a grand experiment that requires attention and participation.

Think of it as a spiritual, joyful lo-fi cousin of The Matrix and Bacurau. The message might be the same here, but with more music and dancing. And it still manages to look like a badass cyberpunk film. Neptune Frost is a future cult classic in the making.

Review originally published during the New York Film Festival in October 2021. The film opens in New York on Friday, June 3, and in Los Angeles on Friday, June 10, via KinoLorber. Visit the official site for more information.

Do you feel this content is inappropriate or infringes upon your rights? Click here to report it, or see our DMCA policy.
Anisa UzeymanKino LorberRwandaSaul Williams