Iman Vellani, Matt Lintz and Yasmeen Fletcher star in the Marvel series, debuting on Disney Plus. 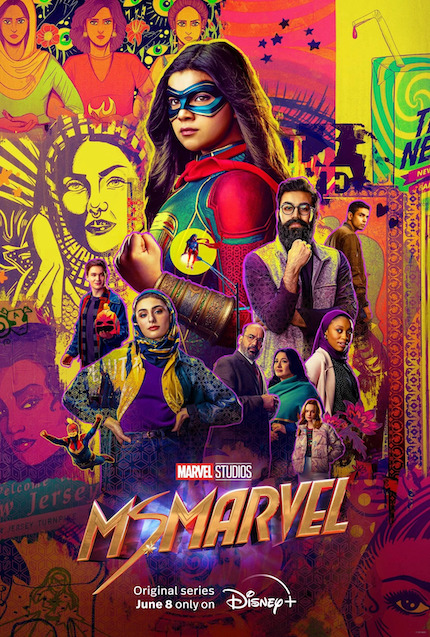 She dreams of superheroes. Then she becomes one. Neat!

Tossed about by the throes of adolescence, 16-year-old Kamala Khan (Iman Vellani) is much like other young people her age.

She has protective parents (Mohan Kapoor, Zenobia Shroff), a protective older brother (Saagar Shaikh), and two supportive best friends, Bruno (Matt Lintz) and Nakia (Yasmeen Fletcher). She is a young Muslim-American woman, living in bustling and very diverse Jersey City, New Jersey, where she stands out, not for her race or religious belief, but because she is so geeky. She's a self-confident person, even if she's not quite ready to decide upon her future life course.

A bangle changes everything. (FYI, not one of The Bangles, but a rigid bracelet.)

Directors Adil & Balali, who helmed the great crime film Black (2015) and the surprisingly good Bad Boys for Life (2020), infuse the first episode with crackling energy and a compulsive pace. Series creator Bisha K. Ali, who wrote the first episode, quickly establishes Kamala's likable personality with her wry voice-over narration, illustrated by her colorful doodles and sketches coming to life as she lives her best life.

She has her friends, she has her family, and she has her superheroes, especially Captain Marvel, with whom she identifies as her favorite Avenger. Naturally, she wants to attend the very first AvengerCon, a gathering for super fans, which will be held nearby, though it will require that she and Bruno use their collective wits to attend against the wishes of Kamala's parents.

As events progress, Kamala's cultural and family background is steadily explored, especially in the second episode, as more characters talk about challenges they face, now or in the past, that shape -- or have shaped -- their lives into profoundly distinctive ways that are quite different from the prototypical average Marvel hero. As for Kamala herself, she must decide what to do when she discovers that the bangle, a recently-arrived family inheritance that her mother describes as "junk," is connected, somehow, to superpowers that are difficult to describe and, again, not very much in common with what we've seen from the ever-expanding Marvel family of superheroes.

Kamala is still a teenager who is figuring things out for herself, and that comes to include the dreamy Kamran (Rish Shah), also recently-arrived to the school, who presents Kamala with feelings she has never experienced before.

Lightning-quick, the show so far depends mightily on Iman Vellani as the beguiling protagonist. Beyond her immediate likability, she also suggests that further layers of her personality are yet to be revealed.

Marvel's shows in the streaming age have been hit or miss. Through two episodes, Ms. Marvel looks like a hit.

Do you feel this content is inappropriate or infringes upon your rights? Click here to report it, or see our DMCA policy.
Disney PlusIman VellaniMarvelMatt LintzUSYasmeen Fletcher