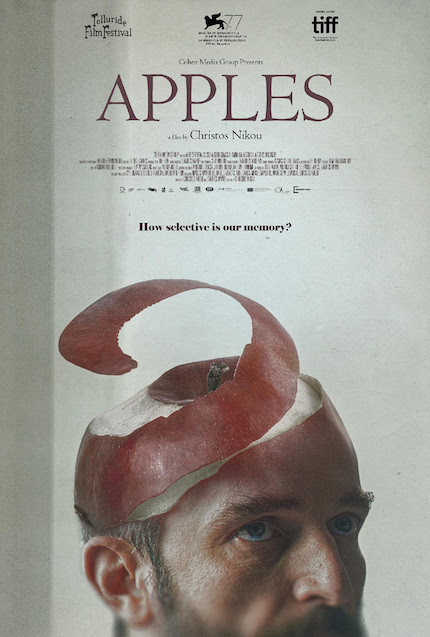 Nine years after Yorgos Lanthimos' remarkable Alps bowed on the Lido, Nikou arrives at La Biennale with Apples (original title: Mila), his debut, which shares hereditary features. The comparison of the two auteurs -- one established and celebrated, the other one rising -- will eventually grow into a routinely repeated refrain.

Nikou served as an assistant director on Lathimos' breakthrough and sophomore solo directorial feature Dogtooth. As if to preemptively distance himself from too much of comparison to be made, Nikou cites explicitly among his influences Spike Jonze, Leos Carax, and Charlie Kaufman. However, Apples is a full-blooded absurdist deadpan parable cut from the finest Greek New Wave cloth. And there is no denying that influence.

Despite the signature tragicomic aesthetics of surreal realism propelled by Yorgos Lanthimos, Athina Rachel Tsangari, and Babis Makridis, among others, Apples enters with a spin. The opening scenes makes a mentioning of "new identity" program and "the Disturbed Memory Department of the Neurological Hospital". These notions sound as if lifted from one of Philip K. Dick's speculative phantasmagorias rather than from contemporary Greek cinema. 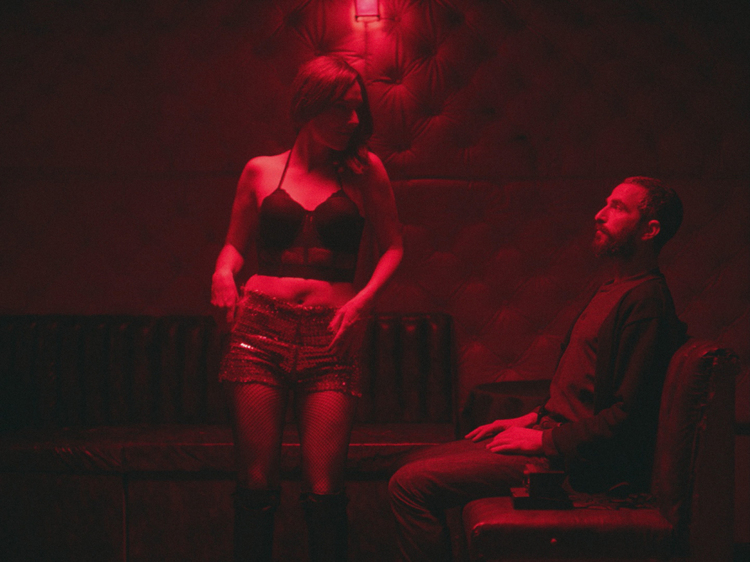 Nikou merges a dystopic story, an alternative history set-up, and absurdo-mordant parable in a narrative of a raging pandemic causing severe amnesia. The leading protagonist-in-suffering portrayed in the finest detached and affectionless performance by no other but the leading actor of Babis Makridis' absurd vehicle dramedy L and Lanthimos' Alps, Aris Servatalis.

The protagonist Aris (the character´s name) happens to contract a "new virus" that has been plaguing Athens lately. He ends up in a hospital after he is not capable of telling a bus driver where he was originally heading. Thus Aris becomes the latest arrival at the "Disturbed Memory Department".

Sporting a perpetually apathetic look, his only tie to the former life seems to be an insatiable appetite for apples as he is enrolled in a "new identity" program. The string of tasks or roles that Aris is prescribed to re-enact are designed to turbocharge him back to a condition that would enable him smooth assimilation to a healthily functioning society.

Aris and characters suffering similar fate inhabit the Athens of an analog age. The alternative version of Greek capital offers simpler tools that the "Disturbed Memory Department" exploits as part of the therapy: ride a bike, visit a nightclub, dance at a party, have casual bathroom sex. Aris dutifully albeit dispassionately complies and besides, records his achievements with an old Polaroid camera to have proof.

After several exercises, the full pattern of "the new identity" program transpires. The memory re-booting has been designed to resemble a crash course in growing up trailing through traditional checkpoints from adolescence to fully developed adulthood.

The tasks assigned to Aris create a familiar rhythm of ritualization that prominently dominated Dogtooth or L. Nikou employs rituals as a formalistic device to ponder on pressing topics of identity, reminiscence, loss, and grief, hefty topics that have been rotating in world cinema recently as a symptom of larger diagnosis prevailing in society across the continents. 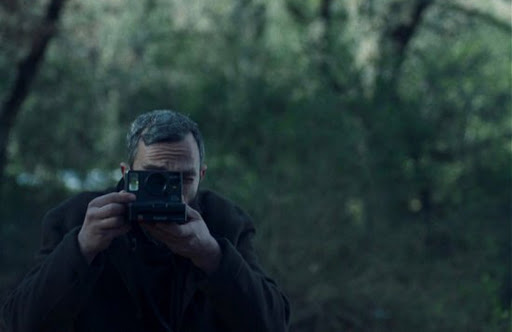 It is not solely the topic of Apples that distinguishes it from its predecessors. Despite the film rehashing the deadpan, acerbic, and absurdist poetics of the most recognizable Greek New Wave oeuvres, it is the Greek oddity guise that nudges Apples off the trodden path of identity crisis and grief-governed films.

It's a win-win result for an emerging director planning to cut a name alongside established auteurs while eschewing a somewhat epigone approach. Apples brings a pressing topic to the table and puts a fresh inventive spin on it, a good sign for a newcomer's career launch. (The Hollywood talent agency CAA signed Nikou when Apples went on sale in the Cannes virtual market).

Compared to the auteur style of Lathimos and Makridis, Nikou preserves the apparent veneer of a black and off-kilter dramedy. Although under the surface, Apples fails to reach the lacerating psychological and existential sadism of its cinematic forefathers.

A tiny snippet of melancho-sentimentality served in the closing twist throws Aris' ordeal into a more emphatic light. Apples ripen into a less perverted and more reversed version of Babis Makridis' grieve-com Pity trading meditation on identity for a license to mourn. It is that tiny spark of humanity that rewrites the story into a narrative deviating from the straightforward retro farce cabaret.

The quasi-genre spin that repackages the signature style and formalism of Greek cinematic eccentricities happens to be the welcomed novelty in Apples. Nikou utilizes the instantly recognizable poetics and trademarks of New Greek Wave as a ready-made aesthetics. His authorship contributes to reframing the trademark style into at least two strands of social commentary, although Apples despite the stark minimalism offers more allegorical interpretations.

The first line stems from the plot directly. As social media served as a platform re-construct personal identities to create a completely virtual and fictional one, Aris doesn't have this privilege. The strange case of his obliterated personality takes an analog process, most likely a result of mental breakdown.

The protagonist's bout of amnesia resembles a self-defensive mechanism, which may be a case for others. The trope of pandemics and indisputable existentialist undertones turns Apples into a tongue-in-a-cheek rendition of worn-out apocalyptic genre in retro-nostalgic coating. 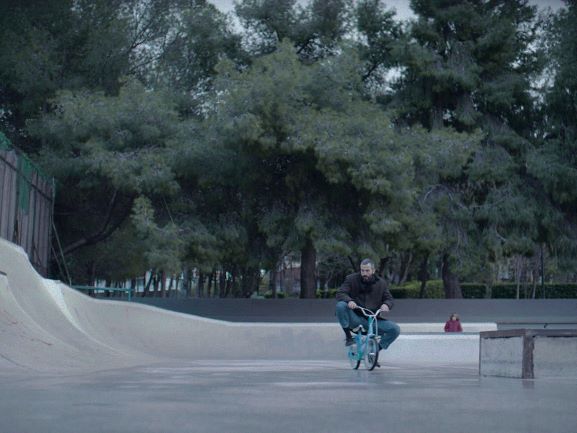 The other line of interpretation relates directly to the world-building of the bygone era when time flew slowly, as mankind did not live under a constant barrage of information. As if possessing the charm of silent movies, the practically anachronistic nature of Apples creates conflicting pleasure of alienation and nostalgia. While they exert the effect ambiguously at once, soothing and abrasion of story and style operate consequentially, alternating between one another.

Apples is more than just a blast from the recent past in terms of the analog era and New Greek Wave. Nikou proceeds naturally to a generation evolution pushing the formalism to new territory while reducing the shock-therapy impact without betraying the dark comedy roots of his cinematic ancestors. The director is eating the apple of New Greek Wave and having it too. It is a fantastic encore of admired cinema that seemed exhausted and its generational expansion.

The film Apples heralds the arrival of new talent. Nikou is already working on his follow-up project, Fingernails, an English-language feature being prepared with his Apples' writing partner Stavros Raptis, working alongside Manchester playwright and screenwriter Sam Steiner.

Originally published in October 2020, in connection with its world premiere at the 2020 La Biennale de Venezia. It will open in U.S. theaters on Friday, June 24, via Cohen Media Group.

Do you feel this content is inappropriate or infringes upon your rights? Click here to report it, or see our DMCA policy.
Christos NikouCohen Media GroupGreeceStavros RaptisAris ServetalisSofia GeorgovassiliAnna KalaitzidouComedyDrama