Director Watanabe Ayumu ('Children of the Sea') orchestrates a gentle, gloriously beautiful symphony of color, illuminating the complexities of adolescence. 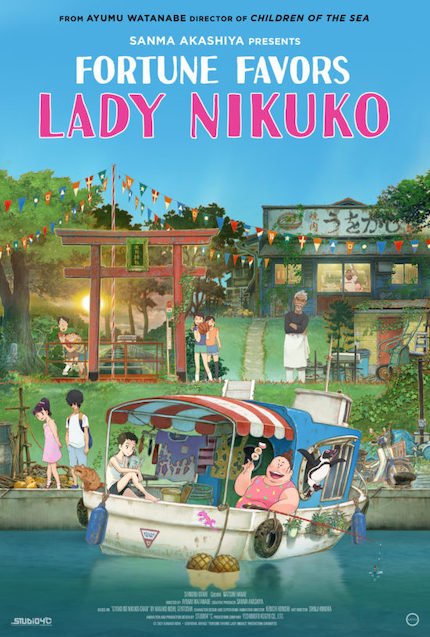 Growing up: joys and beauties, pain and positive thinking.

Kikurin loves her mother Nikuko, despite or, perhaps because of, all her imperfections, which are readily apparent. But isn't that what love is all about, loving someone for that person's strengths and weaknesses?

Unreserved, unbiased love is only for children and/or foolish adults. Kikurin is a savvy adolescent who is well aware of her mother's shortcomings, especially her propensity for falling in love quickly and tolerating the actions of men who are not truly worthy of her affections. Or Nikuko's indulgent willingness to fund their selfish desires. Or her propensity for moving to another city every time a romance ends disastrously. Or her mother widely-known reputation as a full-figured woman who is known as "The Meaty Lady." None of these things lessens Kikurin's love for Nikuko by one iota.

A child's love is not to be confused with pride, however.

For all that she loves her, quietly, in their home and in their private life, when it's just the two of them, Kikurin is readily, deeply and frequently embarrassed by her dear mother's words and actions. Every time they step out the door, Nikuko's brash exuberance charges the air around her.

Everyone else cannot help but be aware of her presence, not only because she is a large, full-figured woman, but because she always speaks her mind at the top of her lungs. She wears her heart on her sleeve, where it happily lives alongside her singular love of puns (of all types), buoyed by her voracious appetite.

Having become accustomed to her mother's peripatetic lifestyle, Nikuko has developed the ability to fit in wherever she goes. She yearns for a bit of permanence, but is resigned to how things are and has resolved to make the most of it.

Nikuko's latest failed romance left her and Kikurin in a village by the sea. It's quite lovely and calming, picturesque even. It's a good place to heal, and perhaps a safe refuge for the future. The owner of the cafe where Nikuko found employment rents his cozy and comfortable boat to her, so she and Kikurin live there.

The gentle story of Kikurian's relationship with Nikuko unfurls at an unhurried pace. Director Watanabe Ayumu previously helmed Children of the Sea, which our own Ard Vijn reviewed in 2020. What Ard wrote about that film applies here as well:

"First things first: Children of the Sea looks gorgeous, jaw-droppingly so. Produced by the legendary Studio 4°C (of Genius Party fame), the film employs an interesting style where all animated characters seem roughly sketched, while environments are often impossibly detailed."

In his review, Ard explained that the story itself impressed him less. What about the story in Fortune Favors Lady Nikuko? Nishi Kanako (four previous writing credits on live-action family dramas) and Ohshima Satomi (some 15 previous credits, mostly writing live-action series since 2005, but also several feature films) are the credited screenwriters for what appears to be an original project, and they have constructed a slender narrative thread in which the relationship between mother and daughter is explored tenderly and with kindness.

Since the story is told from Kikurin's perspective, her gentle adolescent yearnings are not always explicable, but then again, when we're young, we only think we know everything. But we don't.

Episodic in nature, Fortune Favors Lady Nikoko takes a certain turn for its third arc that was initially puzzling until I saw how it fits neatly into Kikurin's life. And then it all made sense, and nearly brought me to tears. It's a beautiful film and a lovely story about a young woman coming to grips with what it means to be an adult.