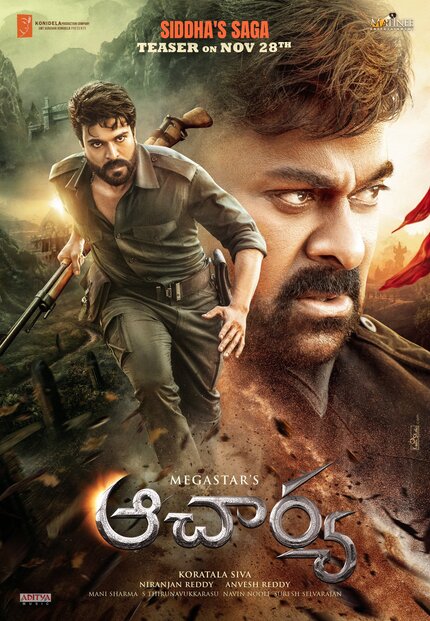 With the blistering success of S.S. Rajamouli's latest epic, RRR, surprising most industry analysts around North America, it's a perfect time for one of that film's stars to release the trailer for their next big budget project.

Ram Charan (Rangasthalam, Magadheera), who played Alluri Sitarama Raju in RRR, shows up next in Koratala Siva's action thriller Acharya alongside his legendary father Chiranjeevi. Both actors are largely unknown outside of their core Telugu language audience, but RRR's success has Ram Charan making inroads with international film fans, and this is a perfect opportunity to introduce the world to the greatness of Chiranjeevi.

For decades going back to the early '80s, Chiranjeevi ruled Tollywood film screens in Andhra Pradesh and even made a run at Bollywood with multi-star films like Geraftaar (co-starring with Amitabh Bachchan and Rajinikanth). He retired from acting to concentrate on politics in the aughts, but came back in a big way in teh last few years, first with Khaidi No. 150, and then with the sprawling epic Sye Raa Narasimha Reddy.

While Charan and Chiranjeevi have shared the screens via the latter's cameos in Magadheera and Bruce Lee The Fighter, this will be their first film as full on co-stars so expectations are sky high. The below trailer gives us a taste of a town in trouble, and the badasses who take it upon themselves to save it. Check out the trailer for Acharya, opening in theaters on April 29th around the world.

Do you feel this content is inappropriate or infringes upon your rights? Click here to report it, or see our DMCA policy.
Koratala SivaChiranjeeviRam CharanKajal AggarwalActionDrama