Review: THE GIRL AND THE SPIDER, A Weekend of Quiet Revelation 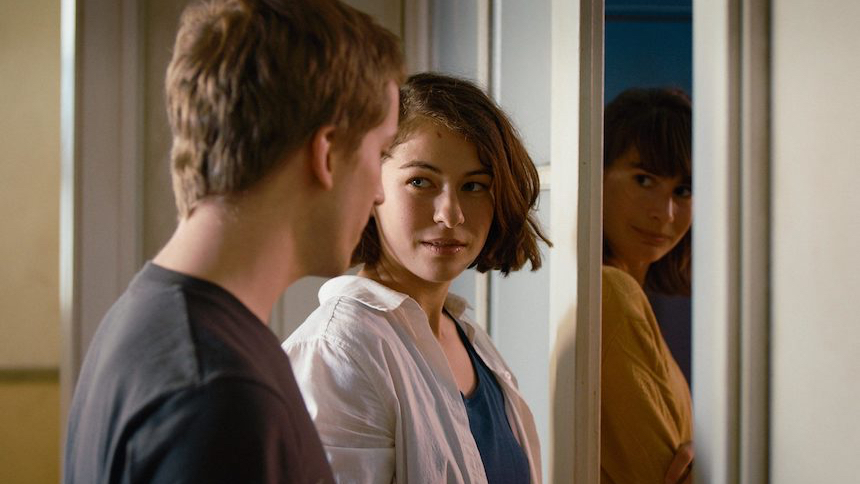 Almost a decade after their mesmerizing debut feature, The Strange Little Cat, Swiss-born twin brothers Silvan & Ramon Zürcher return with the equally as subtle and profound The Girl and the Spider.

It is the weekend Lisa (Liliane Amuat) is moving out of the apartment she shares with Mara (Henriette Confurius) and Markus (Ivan Georgiev). On a Saturday afternoon, the millennial-aged roommates gather at Lisa's new place along with Lisa's mother, Astrid (Ursina Lardi), and a father and son handyman team. Amidst the upheaval of the weekend, Mara and Lisa encircle each other, sharing fleeting glances and gestures back and forth across new and old rooms; the young women seem to be filled with a strange mix of lust, regret, rumination and dry mirth.

As the story shifts back to the old apartment, night falls and a party begins; friends and neighbors gather; Jan (Flurin Giger), the son of the handyman shows up. Kerstin (Dagna Litzenberger-Vinet), from across the hall, takes her chin piercing out. Mara asks Kerstin if she's ever let wine drip from the hole in her skin.  When Mara excuses herself, Jan rolls cigarettes with Kerstin. Lisa dances in a flush of bodies, wearing a blue wig Astrid originally fashioned from her own hair when she was pregnant with Lisa. Lisa dyed the wig blue when she inherited it.

Late at night, when the festivities have died down, a storm arrives. Mara's window blows open. When she awakes with a fright, she nicks her head on its edge. Across the way, in Kerstin's room, she dances her fingers across the lower abdomen of a naked Jan, who is fast asleep. From the half-open door, Kerstin's reclusive roommate, Nora (Lea Draeger), watches as the young man awakens and embraces Kerstin.

Sunday morning comes and the packing continues. As the day proceeds to night once again, we begin to see the friendship between Mara and Lisa perhaps meeting its natural end; or merely just a first small death; a moment in limbo, before things settle into a new rhythm.

Working with cinematographer Alexander Haßkerl in static medium close-ups and medium wide-shots of apartment rooms and a widely rotating array of faces, buoyed by Confurius' pensive and arresting performance as Mara, the patient and exacting vision of the Zürcher twins paints a beguiling look at the dance of humans in everyday moments of work, play, grace, bitterness, contemplation and repose. Like in The Strange Little Cat, any grand cinematic gestures that appear in The Girl and the Spider are kept to the margins of dreams, memories, imaginings and the wild stormy-night abandon of old Mrs. Arnold, Mara's upstairs neighbor.

A grounded cinematic symbolism gains rhythm through small motifs of happenstance based around fragility, creativity and whim. Instances of broken appliances, shattered dishes, cuts and bruises, glitchy PDFs, children's drawings of apartment living, and Mara's striking and intimate portraits of the people in her life, are interwoven with a nervous dog, a lonely cat and the titular spider. These motifs play into the hushed, sometimes harsh and slightly bizarre reveries of human touch, pleasure and connection that lie at heart of The Girl and the Spider.

For in the Zürchers' universe, the smartphone is just another useful tool stashed away in a coat pocket. The chemical-rush of social media is instead found in the slow-drag of a cigarette. As such, there is a beautiful arc of presence in these people's lives. It is of tangible and tactile things. It is of the intensity and possibility of the other person in front of you or behind you; of the person moving at your side or on the balconies above and below. It is how casual glances turn into intense stares. It is how a joke precedes an injury and how memory becomes a sister to the future as much as it is to the past.

Moving within these equally poetic and naturalistic microcosms, the brothers explore an existential scale that ultimately unfolds into nearly unfathomable, unnerving depths, recalling both the aching human epics of Krzysztof Kieslowski and the strikingly opaque cinema of Angela Schanelec.

It is in the 'Zürchers' precise and impactful use of the medias-res where empathy for both humans and human objects comes into focus. This gently divine touch brings with it a movie-magic that charts thematic variations on loss, transition and perception with such an undeniable soul-stirring affect that I am left in awe and filled with appreciation for what is one of the best films of the year.

The film opens April 8 in New York City via Cinema Guild before rolling out to selected cities nationwide. Visit the official site for theater locations and other information.

Do you feel this content is inappropriate or infringes upon your rights? Click here to report it, or see our DMCA policy.
henriette confuriusliliane amuatramon zürchersilvan zürcherthe girl and the spider

More about The Girl and the Spider