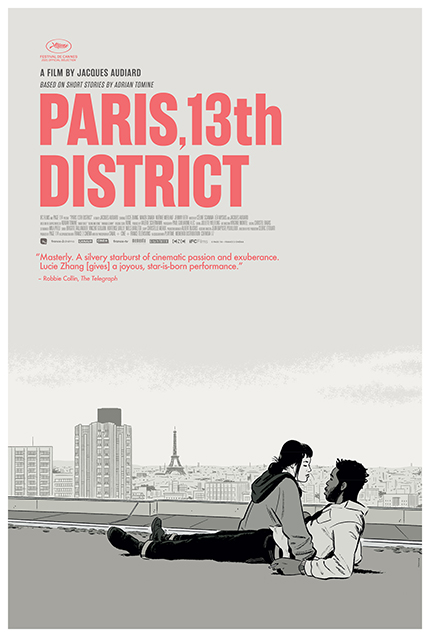 Known as Les Olympiades, named after cities across the world which had hosted Olympic games, are the middle income high-rise residential buildings built in the 70s, near shopping malls and pedestrian overpasses, situated in the 13th District (13th Arrondissement), which is commonly regarded as a Chinatown of Paris.

It's a place far from the images associated with the famed city. With its diverse population and nondescript modern buildings, shops, business offices, and constantly changing landscapes due to new developments, it can double as any other modern Asian city.

This is the backdrop of Paris, 13th District, a new film by Jacques Audiard, the supreme purveyor of French outlier cinema (Prophet, Rust and Bone, Dheepan), chronicling the stories of immigrants who make up and represent the face of the increasingly diverse nation.

After delving into the Western genre with the wry The Sisters Brothers, Audiard takes yet another unexpected turn with Paris, 13th District, delicately sampling American cartoonist Adrian Tomine's work, spanning three decades -- specifically, Hawaiian Getaway, Amber Sweet and Killing and Dying -- and situating them in a contemporary Paris setting. Shooting in crisp monochrome, with kinetic camera movement and editing, and a diverse cast, with the script co-written by Céline Sciamma, the film has a distinctly modern and youthful feel to it. Skillfully interweaving Tomine's stories of urban ennui, mistaken identities, and human connections in an Internet age, Audiard captures a vivid and lively portraiture of an emerging new generation; while doing so, he reinvents the notion of Parisian romance.

Taiwanese transplant Émilie (luminous newcomer Lucie Zhang) is a rootless, rudderless, lonely young woman living rent-free in the apartment of her grandma, who's in a group home due to Alzheimer's Disease. It's in one of those high-rises in Les Olympiades.

She subsists her living with a telemarketing job she hates and has a revolving array of roommates. After mistaking Camille (Makita Samba), who responded to her web classified for a roommate, for a female because of the female-sounding name, she reluctantly agrees to their new living arrangement. Soon they start a no-strings-attached sexual relationship.

Camille is a disillusioned, cynical public school teacher with a know-it-all attitude. He has aspirations to have a business of his own. Soon he starts lecturing Émilie about her lazy millennial lifestyle while she grows feelings for him. Will he help her to get her life in order? Will she melt his cold, calculating heart?

The breakout star of the film is definitely young Lucie Zhang. She inhabits her character with ferocious physical intensity and abandon. She understands the power of her youthfulness and knows exactly how to use it. Her portrayal of Émilie's wayward lifestyle and urban ennui are so natural and authentic, you see her great potential as a major acting talent in the making.

Makita Samba is also great as a self-assured individual finding his priorities slowly. So is Noemi Merlant, as a bookish woman letting things go. So is Camille Léon-Fucien as Eponine, a sassy, precocious young woman on her way to Internet stardom.

Coincidences and chance meetings weave these Parisians' lives together in an Internet age in Paris, 13th District. With Tomine's astute insight to his characters' psyche intact, Audiard creates sexy, vibrant and ethnically diverse portrayals of youthful love stories that upends the postcard-ready and homogenous Paris romances we are usually familiar with. It's a welcome change.

The film opens April 15 in U.S. movie theaters via IFC Films. Visit the official site for locations and showtimes.