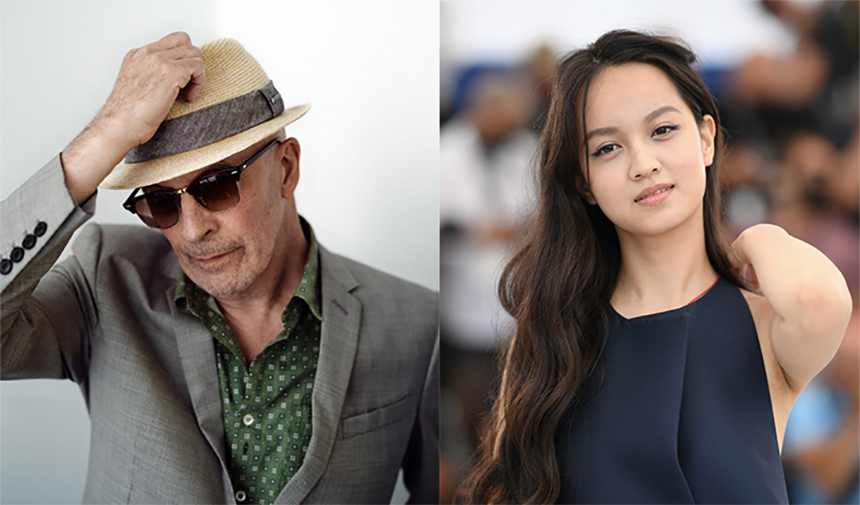 Jacques Audiard, known for his superb thrillers (Read My Lips, The Beat that My Heart Skipped), became the supreme purveyor of French outlier cinema, chronicling gritty immigrant experiences in an increasingly diverse nation with such films as The Prophet, Dheepan and even to some extent Rust and Bone, comes out with a slight, sexy romance film based on Adrian Tomine's graphic novels called Paris, 13th District (Les Olympiades, Paris 13e). With its diverse cast and unusual setting (a lesser known and seldom seen neighborhood, in films anyway), Audiard is upending the typical notion of romantic French film taking place in Paris.

He also introduces us his new ingénue, Lucie Zhang, a 21 year old French actress of Chinese descent, giving a star making performance as Émilie, a disaffected, live-by-the-moment millennial who tries to navigate ever so complicated human relationship in the Internet age.

They both were in New York for Rendez-Vous with French Cinema in March and I was able to snag an interview with them. It took place in Midtown Regency Hotel in Manhattan. Audiard, an industry veteran who worked with many great actors over the years, is a fast talking gregarious man, whereas Zhang by comparison, is much more subdued and shy, unlike the uninhibited charactor she portrays. It was an interesting dynamics that I got to witness.

Screen Anarchy: I know that the 3 narrative threads are based on the work of American graphic novel artist Adriane Tomine, I am curious how Paris, 13th District all came about?

Jacques Audiard: I’m afraid my answer might be a little uninteresting. At the time I was looking for a subject for a film. I didn’t have anything specific in mind. And a friend of mine recommended these graphic novels by Adrian Tomine, saying, “if you read them I’m pretty sure you will find something you might like,” and I wasn’t really familiar with him at all. And I read some of his work and I really loved them. So it was a good suggestion. And what I found interesting about Tomine as an author, is that for a graphic novel, it has a lot of psychological analysis - it had characters that are complex and he also left things unexplained in them. At the same time, his drawing style, he doesn’t beautify things- he just shows the reality of what they are like and that appealed to me as well.

JA: I really didn’t know the popularity of Tomine. So when I started working on the project, people asked me what I was up to and when I tell them that I am doing this project based on Tomine’s work, I was surprised that everyone knew his work. I was the last to know!

How does Tomine’s work translate to the Paris setting? Is it because the stories are universal?

AJ: I don’t know. I think, the psychology of it, to me it is very individual and even very local. But what I think he does is he creates these portraits of complicated people. (pause) Ask Lucie. She will know. (laughs)

Lucie Zhang: My answer is not that interesting either. I have a very good friend living there right now. And my parents met each other for the first time there and fell in love. I don’t live there but I often go there to get bubble teas and food and shop with friends.

What is your relationship with the place?

JA: My relationship is historical. I’ve lived there for a really long time. I moved away after between my first and second film. It’s an area that I know very well. I like it very much. It’s very diverse and always has been. It’s also an area that the last 15-20 years has really undergone a lot of physical change. And the sensation that you get, when you are there, is that you are in Paris without being in Paris, because it doesn’t have the look that we are all familiar with. Particularly, by filming it in black and white, it gave me an opportunity to show an illusion that it could be not even Paris, that it could be an Asian city. It has that kind of look to it. This is true, particularly when you go to Les Olympiades (the 4 high rise residential buildings and shopping malls), that give that kind of feeling. Well, its not like New York high rises in comparison. (laughs) It also feels very young because there are two branches of universities, so there are a lot of young people there.

I mean, I go to Chinatown here in Manhattan all the time to eat and shop.

JA: Are we far from Chinatown here?

It's just a subway ride away downtown.

LZ: I was looking for it yesterday but took the subway and ended up in Queens Plaza.

Oh no. You took it to the wrong direction.

LZ: Oh really? I wanted to go to a Chinese restaurant because I was craving some good food. I ended up in some place and the food was not so good.

I should've known. I know some good places.

How was the casting process?

LZ: Three sessions. First I saw it on the internet. I sent the email and met with Christel Baras (casting director). Second, it was a call back because she liked me, even though I wasn’t the obvious choice because at the time I was 19 and I believe the character was 25 I think. They thought I looked too young and too childish- I am still, I think. So they rejected me. Then the covid lockdown started. And during it I got a phone call again. Then I met with Jacques.

And how did you get to choose Lucie?

My question stirred up a frantic conversation between Audiard and Zhang in French. I can only make out when Zhang says in English, looking at me laughing - "I lacked confidence," in response to what Audard was saying.

JA: Christel suggested several actresses for the part. So even though the casting process seemed very long for Lucie, it’s quite normal how we did it. What I learned from this process is I shouldn’t always trust my instincts because my first choice for a particular role can turn out to be a completely a wrong person. And for this film, with Amber (Jehnny Beth) and Nora (Noémie Merlant), were also a similar kind of situation. I think for me what worked here was Christel who really pulled the cast together. So you have to be really careful what to say when you are a director.

LZ: How do you know...at what point you know, if it's the right person or wrong person for the role?

JA: Well, I worked with you in rehearsals and found out. It's actually very interesting because it concerns the timeline of how long it takes versus when I knew you were the right actor, for you it is the exact moment but for me it was working together for a while that I knew. That it wasn't temporal. Does it make sense?

JA: I think the moment I knew was that Makita (Samba) who played Camille, came in that you guys work together very well. It's when they were talking and listening to each other that I knew.

This conversation was revealing in a lot of ways how Audiard's process with actors works. That it's not necessarily choosing the right actors but it's a bigger process and sculpting the actors during the rehearsal.

Obviously this film was shot during Covid Pandemic. Was it difficult for you?

JA: Of course there were a lot of protective restrictions and constant testing...and in a way it was kind of funny because after you come on to the certain part of the set, you test, you wear the mask, then you come on to the actual set, you take off your mask and take off your clothes... so it's a peculiar situation. But interesting thing during the lockdown is that you basically have a whole population that are forced to be inside, but here the actors were able to come to work and it was a really good time for them because it gave them some place to go outside. The french word here is confinement because they were really confined.

The party scene with the DJ, there were about 100 extras and all of them have been tested, tested and tested again to be able to come. And when they came they were really partying because it was a liberation for them, to the point they didn't want to leave! We had to usher them out because it was the first time they were out of their room in 3 month!

The film is vibrant and has a lot of great energy and has a hopeful ending. The world we live right now is not like that. It's full of disasters and wars. As a generation Z, who went through all these difficult times - The Gulf Wars, the financial collapse, pandemic and another war or invasion happening right now all in your lifetime. Do you feel that your generation is hopeful for the future?

LZ: It's a very hard question. I feel there are two types of people. One is people who are feeling really ill at ease and sometimes they feel they are victimized by all the things that are happening. For these people, they feel there is no hope. The other type is people who are more cognizant of history and what happened in the past that there were worse situations in the past and people managed to survive through them. And they are more optimistic. So it's really hard to say.

Internet. Is it helping or a hindrance for human connection?

JA: We can't make that kind of black and white distinction. It's bad in a sense that its a conveyor of conspiracy theories, fake news, all of that. But at the same time it helps people to connect with culture and broader idea of society, in that aspect it is good. If I can give you a brief analogy in the political world: In France right now they banned RTTV. the purveyor of propaganda. Personally I don't think its a good idea to ban it. We all know it's propaganda, we all know it's fake news, we all know that they are rallying against the liberal agendas and trying to rewrite history with their own fairytale in what is really happening. But at the same time, if we leave it there, we know we can look at them, see how they think and how they are progressing. But if we ban them completely, it robs us of that possibility. And sometimes people do stupid things (like banning) in the spur of the moment but I think it's better for us to leave it. OK. that's my bit of intellectualizing for the day. It's a time for a cigaret break!