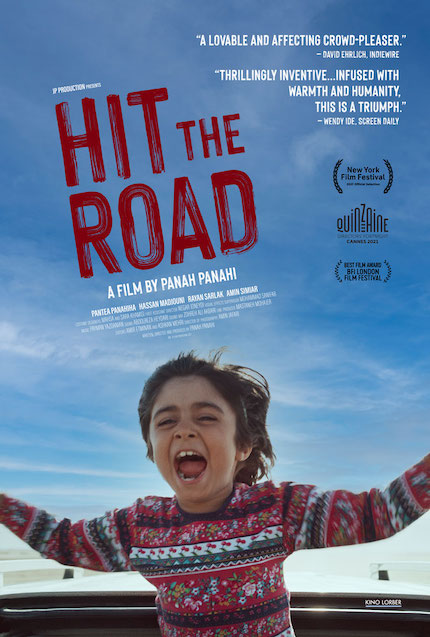 Before watching Hit the Road, I vaguely remember reading that it was Panah Panahi's debut. Upon finishing the film, I felt compelled to double check that it was indeed his debut.

I could have blamed my bad memory; but I must confess. A part of me harbored some disbelief that a film directed with such mastery, shot so beautifully, and written so cleverly so as to convey both comic charm and dramatic depth, could be a debut. When I confirmed that indeed it was Panahi's debut, the shame was on me.

To be fair, Panahi descends from quite the pedigree. He is the son of one of cinema's biggest names: Jafar Panahi (This Is Not a Film, Taxi). And he has worked on some of his father's films, including Three Faces. But, let it be declared loudly, Hit the Road is an extraordinary debut. It follows the tradition of Iranian cinema, that most wonderful alchemy performed by Iranian directors, of turning the seemingly mundane into the remarkable.

Hit the Road, as the title clearly suggests, is a road trip movie. It is structured like every road trip movie. The film alternates between shots of characters interacting inside a vehicle and rest stop sequences. A worn-out formula, some may say; but to me more of the foundational narrative that allows Panahi to tell a very specific story populated by endearing characters.

Our occupants consist of mom (Pantea Panahiha), dad (Hasan Majuni), big brother (Amin Similar), and a fireball of energy, a true handful of a little brother (Rayan Sarlak). We start piecing together that this is no ordinary summer road trip intended to get the kids out of the city for a while. Mom and dad are careful that no cell phones came along for the ride.

When mom and dad fear that they are being followed, it becomes clear that the no cell phone policy is not a mere parenting ploy intended to peel little brother away from a screen. If there are no phones, the family's journey cannot be tracked.

Big brother is distant and sulking for most of the drive. We eventually learn why big brother is so taciturn. This will likely be the last time he sees the other three members of the family. The whole point of the road trip is to get big brother closer to the border so that a smuggler can get him out of Iran.

The theme of death continually comes up during the road trip. The family dog is dying. When mom poses the question, "Where are we?", little brother answers, "We are dead." Undeniably, there is a bittersweet quality underlying the entire narrative. Both parents are trying to savor the final moments they get to spend with big brother before he goes away.

While all this seems like quite heavy subject matter, there are many moments of levity throughout the film. There are scenes of mom doing carpool karaoke. Dad masterfully handles little brother's hyperactivity with sensitivity and humor. Dad even manages to make cannibalism funny for little brother.

And in what is perhaps the funniest interaction, the family picks up a bicyclist who adores Lance Armstrong. After dad gets the bicyclist to drop his defense of Armstrong's doping, the bicyclist has no other justification to give other than at least Armstrong became rich and famous. One only wishes one had a dad who is this perfect mix of cynicism, wit, and compassion.

Hit the Road has a rhythm to it, just like any road trip. Funny things occur, sad memories come to the fore out of nowhere, people get annoyed with each other, and there's always a song on the radio that everyone in the car sings along to. Hit the Road will indeed hit you. It will hit you with one of the most devastating endings you have seen in a while.

The film is now playing in New York and will roll out in movie theaters throughout the U.S. in the coming weeks via Kino Lorber. Visit their official site for more information.

Do you feel this content is inappropriate or infringes upon your rights? Click here to report it, or see our DMCA policy.
Amin SimiarHasan MajuniIranPanah PanahiPantea PanahihaRayan SarlakDrama