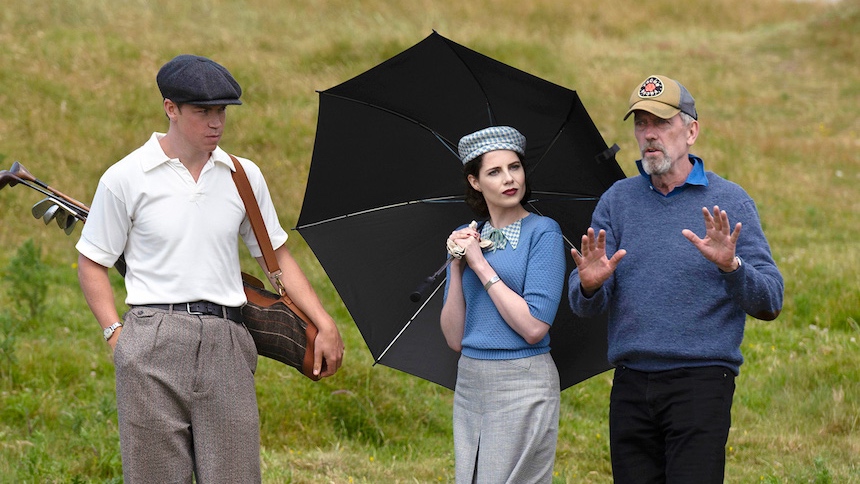 Why Didn't They Ask Evans?
All three episodes are now streaming on BritBox. I've seen all three.

Long before he broke out in the U.S. as the cantankerous titular physician in House, M.D., Hugh Laurie had established himself as an actor and performer who could easily slide between the comic and dramatic arts; his talents included writing and directing episodic television.

His experience serves him ably as the writer and director of a limited series that is based on a novel by Agatha Christie. First published in 1934, Why Didn't They Ask Evans? follows two amateur detectives as they endeavor to solve the puzzle of a dying man's last words.

The haunting refrains of "Midnight, the Stars and You" play during the opening scenes, which threw me off initially because I only recognized the song from its use in Stanley Kubrick's The Shining, but it's period-appropriate and helps to set the stage, which kicks off proper in Wales as Bobby Jones (Will Poulter) caddies for an older gentleman on a lovely, seaside golf course. They hear a scream, then a thud, and see a body on the beach below.

Bobby clambers down and hears the man's mysterious final words -- "Why didn't they ask Evans?" -- before he expires. Checking his pockets, Bobby notes a fading photograph and a shiny keychain before he's joined by another passing stranger.

The mystery develops from there. Who is Evans? And who is "they"?

In the village, Bobby is known as the Vicar's son; a military veteran in search of a clear direction in life. His father, Rev. Richard Jones (Alistair Petrie), is loving but wants him to do more than what he's now doing, performing temporary odd jobs. In the wake of the stranger's death, Bobby is reunited with a childhood friend, Lady Frances "Frankie" Derwent (Lucy Boynton), as well as fellow military veteran Knocker Beadon (Jonathan Jules). Knocker reminds him of his offer to partner with him in his used car dealership in London, which is about to open, while Frankie's eyes sparkle when she sees him.

Prompted to action by these three developments, Bobby prioritizes: first, he decides he must solve the mystery. Then he can join Knocker in London and forget about Frankie.

Things do not go as planned, which is good for Bobby and good for viewers, since Hugh Laurie has crafted a clever mystery that is primarily centered on the characters, primarily Bobby and Frankie. Their friendship was halted when each went their separate ways in their youth -- Bobby was 15, Frankie was 12 -- but the years have been kind to both of them, and they both have matured considerably, not only physically but, more importantly, emotionally.

Bobby is a careful lad, prone to introspection, yet he is also quick to spring into action when needed. Frankie is more impulsive, yet she is also of greater insight and intellect, who is smart enough to know when she needs to slow down and think. Together, they are a witty and playful couple who make a very good match to solve a mystery that is complex and layered.

Hugh Laurie writes good and clever dialogue and directs with a keen eye for striking visuals that frame the action in a compelling manner. It's a good show that proves to be quite absorbing.

Do you feel this content is inappropriate or infringes upon your rights? Click here to report it, or see our DMCA policy.
Agatha ChristieBritBoxHugh LaurieLucy BoyntonUKWill Poulter