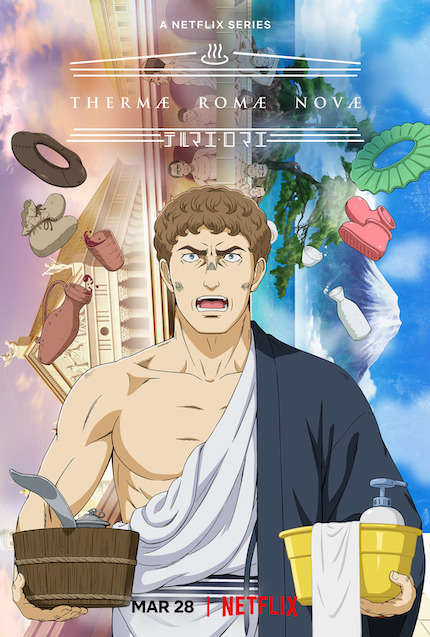 What is your tolerance for watching cartoon butt on television?

Resuming my Netflix subscription after 12 months away from the service, I sought out two new anime series, which also allowed me to dip my feet back into the rich pool of shows that are scheduled to debut this Spring.

Thermae Romae Novae is based on a manga series by Mari Yamazaki, first published in 2008, which was made into a live-action film adaptation in 2012, which earned a sequel in 2014, and also inspired an anime series in 2012. Whew! That indicates a far greater excitement in the concept that I would have guessed from the rather limp exercise on Netflix.

I've watched the first three episodes to date, and I've rapidly lost interest. I grok the idea that soaking naked in a large warm bath with strangers may be wonderful for your body and soul, but beyond the twist that the hero occasionally time travels for no apparent reason, I'm afraid I'm adrift.

It's built on the idea that the hero, Lucius, grew up in Rome, circa 120 A.D., and greatly admired both his father and his grandfather, who were renowned bath architects. He became a bath architect himself, studying at the best school for such a thing, but times have changed and there is less call for his service. Until, that is, he travels through time, mysteriously, picks up ideas from his future, and goes back to his time and claims them as his own invention. He gains glory as a result.

The most appealing thing about the show are the concluding minutes of each episode, in which author Mari Yamazaki is captured on videotape, visiting various old baths in Japan and talking about their history with experts. Otherwise, it's no sale for me; I guess I'm too much of a shower person.

The series is directed by Tetsuya Tatamitani and written by Yūichirō Momose. 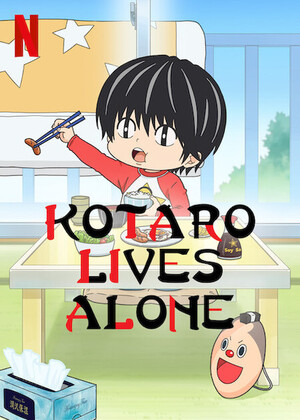 When you were 4 years old, did you want to live alone, without parents or siblings or any visible means of support?

Somehow, 4-year-old Kotaro manages to rent an apartment in a small complex, where his friendly neighbors rally to his support and avoid asking too many questions. It's a dodgy concept, but amusingly told through the first three episodes that I've watched.

Like Thermae Romae Novae, it features cartoon butt, including that of the child Kotaro, which is a questionable decision in the U.S., despite the brevity and non-sexual nature. (They're visiting a bathhouse! Again with the bathhouses!)

Beyond the butt, though, it plays like an adult looking back on his childhood and wondering what it would be like if he was adrift as a child in an adult world without parents or siblings. Kotaro sometimes displays intelligence and insight far beyond his years, and at other times reminds that he's only 4 years of age.

The series is based on an ongoing manga series written and illustrated by Mami Tsumura, first published in 2015. It was adapted into a live-action series for Japanese television last year.

The execution of the concept is strong and steady, though, and it's already showing some melodramatic muscle to accent the ridiculous, potentially tragic premise. A lot of jokes, some good insights, and some squeamish content makes this a slice-of-life oddity that could overcome my initial trepeditations.

Do you feel this content is inappropriate or infringes upon your rights? Click here to report it, or see our DMCA policy.
animationanimeJapanKotaro Lives AloneNetflixTherma Romae Novae