SXSW 2022 Review: Math Is The Enemy In So-So Haunted House Chiller, THE CELLAR 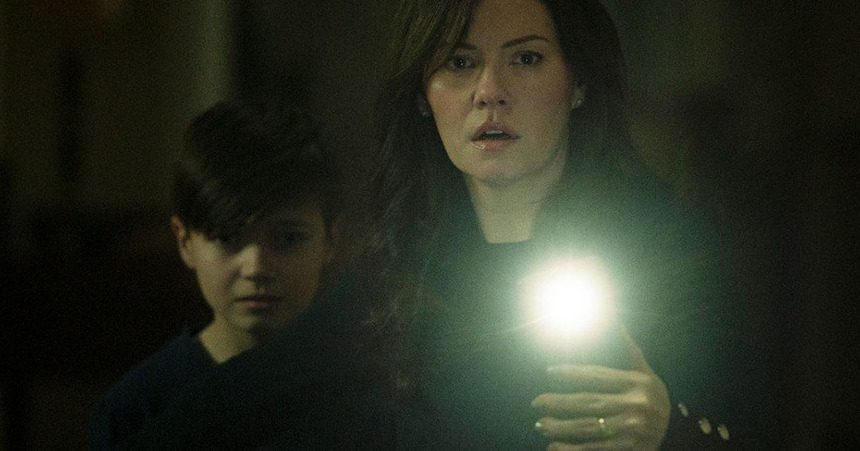 A quick head’s up for all you house hunters out there; if you manage to get a country mansion for a lot less than it should go for on the real estate market, you’d better be prepared for some demonic shenanigans. I feel like this should be obvious for all people and not just those of us obsessed with horror movies, but here we go again with yet another house with evil secrets in Brendan Muldowney’s new Irish haunter, The Cellar.

Keira (Elisha Cuthbert) and her husband Brian (Eoin Macken) are moving their family into just such a gigantic country home after a deal presented itself that was too good to pass up. And while the layman might expect a few problems with old wiring or leaky plumbing, horror fans will definitely understand that this means that evil lurks in every corner of this handsome abode, but especially in The Cellar. Along for the ride are their daughters, Ellie (Abby Fitz), a disaffected teen salty about being ripped away from her friends, and the preteen Steven (Dylan Fitzmaurice Brady), who is just trying to adapt to his new surroundings as best as he can.

As they are initially exploring the house they come upon a locked door leading to The Cellar. Bad omen number one. A key is handily hung on the frame and on initial inspection it doesn’t look like much, but later that evening when the parents go out and Ellie & Steven are left alone, it becomes their worst nightmare. Following a mysterious blackout – old house, old wiring, no big deal, right? – Ellie disappears into The Cellar when trying to flip the breakers and get the power back on. The police don’t take it too seriously, Ellie has a history of running away, but Keira knows something is wrong, and it has to do with this house.

Mom begins to lose her mind, diving deeper and deeper into the absurdly evil history of the house which includes Hebraic symbology, biblical demonology, advanced calculus, and a history of disappearances. At least one of those should’ve showed up in the auction listing, right? I mean it’s gotta be illegal not to disclose advanced calculus driven Satanic rites in a transfer of real estate. It’s enough to make a girl go crazy, which is essentially what Keira does very early in the film. This is where my enthusiasm starts to wane, as Cuthbert’s performance pitches itself very high early on and really never deviates. A lot of fans will appreciate it, after all, she has lost her daughter, but on screen it just reads flat, which doesn’t work for me.

There is a lot of goofiness in regards to the evil nature of the house that feels very forced as well. The evil calculus equation that sets the whole thing in motion is ever present, and while I’m pretty good with numbers, I’m pretty sure that it would take something a little more complex than what we’re given to get the results we do in The Cellar. However, if you are curious, you’ll definitely be able to recite it by heart by the time the credits roll because it is repeated ad nauseum throughout the film, I’m not sure to what end. A lot of people find math intimidating, but spine-tingling scary? Not so much.

Just when you think it’s all falling apart, The Cellar cranks into high gear in the final fifteen minutes, nearly making it all worthwhile. A really fun chase sequence set in the bowels of the house unleashes a deluge of Fulci-esque imagery and ideas along with a really fun creature that we get a few solid and impressive looks at. The film definitely borrows liberally from haunted house lore, but the two most obvious sources are Fulci’s House By the Cemetery and The Beyond, and since those are two of my favorites, those aspects really worked for me. It lacks the gore and shock value, attempting to make up for it with atmosphere and mystery, but I think a little bit of shock would’ve gone a long way in better balancing the first two acts with the more impressive third.

There is almost nothing new in The Cellar, the haunted house has been done to death, but it can be done effectively enough to make us forget that we’re watching a story we’ve seen a million time before. While The Cellar adds a few interesting and novel touches to the old formula, they are never exploited quite sharply enough to make it feel new. It’s a bold choice to play in the haunted house sandbox, I just wish they’d committed to something a bit more exciting than they did, it all feels very safe. Thankfully that final sequence sends it just over the line to warrant a recommendation from me, but it’s a close call, your mileage may vary.

More about The Cellar