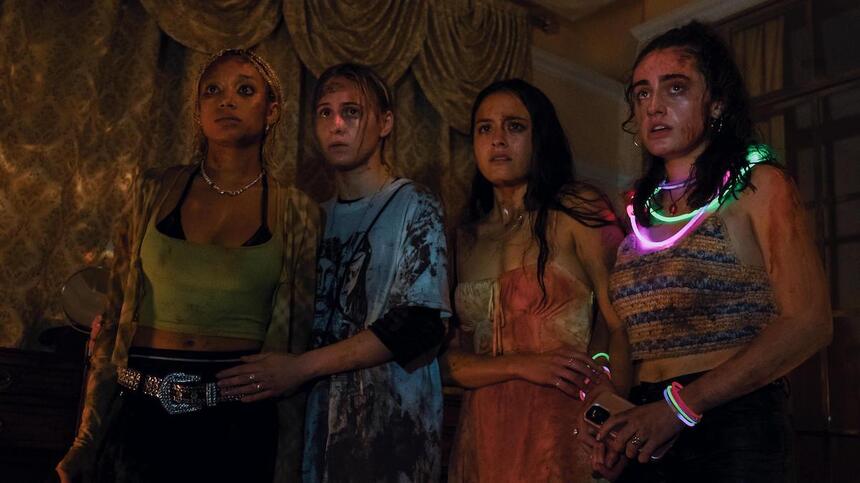 The storm raging outside is the least of their worries when a group of Gen Z friends turn on each other in Halina Reijn’s cocaine-fueled paranoid nightmare, Bodies Bodies Bodies.

With a hurricane bearing down on them in less than an hour a group of seven friends – or maybe six friends and a Tinder hookup, or maybe 3 friends and several frenemies, the math gets murkier as the film wears on – decide to ride it out and have a hurricane party in the ridiculous mansion owned by one of their parents. Sophie (Amandla Stenberg) and Bee (Maria Bakalova) roll in a day late to find the rest of the group in-party-res splashing around in the pool. These two ass-draggers weren’t expected, and we get the feeling that they are also somewhat unwanted, but booze heals most wounds, and even though Sophie is now sober/recovering, the rest decide to mostly let it go and keep the party going.

Sophie goes way back with the group, but her girlfriend of only six weeks, Bee, is a relative newcomer. She isn’t the newest in the crew, though, as mystery man Greg (Lee Pace) brings a dangerously chaotic vibe to the proceedings. He’s Alice’s (Rachel Sennott) chippie, older than the rest by an order of magnitude and physically towering over everyone with an I-could-snap-your-neck-like-a-toothpick-but-I’m-a-chill-bro energy that is both alluring and exhausting. They are posted up at David’s (Pete Davidson) family pad, David does too much coke and feels very threatened by pretty much everything, but especially Greg. His girlfriend Emma (Chase Sui Wonders) was an actress once, and she never lets anyone forget it. Bringing up the rear is Sophie’s ex, Jordan (Myha’la Herrold), who is definitely less than excited to see her former flame all cuddled up with a new girl, and she lets everyone know.

We spend about twenty minutes ratcheting up the tension – it doesn’t take much with this crew – before Sophie decides it is time to defuse this ticking time bomb with a game. Bodies Bodies Bodies. It’s a party game as old as time, everyone takes a slip of paper, one person is designated as the killer, that person attempts to “kill” the rest of the players without getting caught. Think werewolf or mafia, it can be fun, but when everyone’s personal grievances begin to seep into their logic when the time comes to make accusations, things get very messy and it’s all downhill from there.

The game drives deep wedges between pretty much everyone, and they split up to decompress, but when one mysteriously ends up dead, the game turns real and the hunt is on. No one is safe, no one is innocent, and the gloves are off. Accusations fly, the bodies start piling up, and an already tense situations grows deadlier by the minute. It’s anyone’s guess as to who is behind these deaths, and whether anyone will make it out alive is up in the air.

It’s not so much the “what” that makes Bodies Bodies Bodies a surefire crowd-pleaser, it’s the “how”, as Reijn and her cast work their asses off to bring this very contained story to life. The script from Kristen Roupenian is razor sharp, with dialogue and intricate interpersonal detail making these characters really sing. Reijn’s cast did a great job preparing and refining their characters and performances to the point that we feel like we know exactly who they are within minutes, meaning that their eventual breakdowns all make perfect sense.

Though our perspective is largely that of Bee, the outsider walking into a group with a deep and complicated history, even she is not safe from suspicion, either from the party or the audience. She’s new, she has a weird accent (Bakalova’s breakout performance as Borat’s sister, Tutar in the recent sequel will clue you in to what a talent she is), and a murky history, of course she’s a suspect. The script does an excellent job of evenly distributing doubt on everyone, all of whom have at least one major axe to grind, and sometimes much more than that.

These actors are all fantastic in their roles, but Rachel Sennott’s Alice runs away with this film in a bravura performance as the ne plus ultra Gen Z slacker with a struggling podcast and altogether too much energy. Her lead performance in last year’s Shiva Baby was a revelation, and even in a supporting role here she’s clearly acting circles around everyone else. This is partly the character, but a lot of it is just Sennott, who has charisma to burn and brings a kind of lunatic sexy vibe to everything she touches, it’s a damn treat.

On paper it’s a chamber piece: small cast, single location, murder mystery; but the addition of the raging elements outside add some interesting technical flair that really up the ante. The hurricane takes out the electricity, leaving us and the increasingly desperate survivors in the dark with nothing but their phones to light the film. This leads to some very interesting camera work and lighting schemes. How their phones stayed charged all night with flashlights on at all times, I’m not entirely sure, but it certainly makes for clever cinema. Minor logical inconsistencies aside, it’s one more neat trick nestled inside a movie filled with neat tricks.

Fun, funny, surprising, and occasionally even scary, Bodies Bodies Bodies will definitely scratch the itch for genre film fans looking for something to keep them guessing. Not quite horror and not quite comedy, but somewhere in between, this bloody mystery is just the ticket for people whose love language is watching rich, drugged-out brats turn on each other at the drop of a hat. Oh, and that twist ending is a killer.