Review: TURNING RED, The Beast Within

Rosalie Chiang and Sandra Oh star in a charming, perceptive and very funny animated adventure, set in Toronto, and directed by Domee Shi. 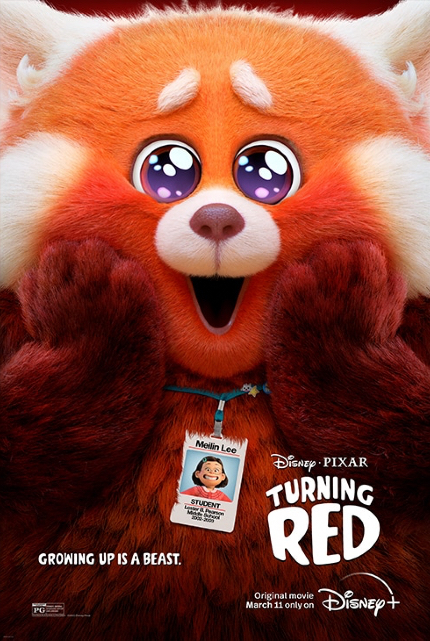 Tails can be funny.

Turning Red
The film will be available March 11 worldwide, exclusively on Disney Plus.

When I was a 13-year-old boy, 13-year-old girls were a strange and mysterious species, standing apart and far away from the likes of me.

Happily, Domee Shi, who was once a 13-year-old girl, knows and understands the species intimately from her own experiences. She survived her teenage years to become an animator and filmmaker, helming the absolutely delightful short film Bao, which won an Academy Award in 2019.

Now she has directed an extremely helpful and utterly charming field guide to 13-year-old girls in her feature film debut, Turning Red, for which she and Julia Cho wrote the original screenplay. Mei Lee (voiced by Rosalie Chiang) lives in Toronto with her loving parents, who operate a temple in Chinatown.

Ming (voiced by Sandra Oh) is the very personification of an overly-protective mother, constantly embarrassing Mei Lee, who just wants to be left alone so she can hang out with her three best friends. The girls are on the verge of becoming women, and want to celebrate by attending a concert by their favorite boy-band.

The year is 2002, which is significant because it was a time of great popularity for boy-bands, and also because it was a time before social media and mobile devices flooded everyone from infancy until old age. Boys could try to show off their nascent muscles on school playgrounds, and girls could ignore and/or admire them from a safe distance.

Since Mei Lee is 13, she is about to bloom into young womanhood by experiencing her first, wonderful and/or terrifying ... transformation into a giant red panda.

As a good little girl, Mei Lee has always done what her mother (and father, but mostly her mother) asked of her. She has studied hard, and finds delight in doing household chores and achieving academic excellence. Her middle name might be 'obedience,' so dutifully does she listen to and obey her parents.

She is, however, is in no way prepared for this shocking transformation and, naturally, freaks out. Very quickly, though, she realizes that she can control the beast within from manifesting if she can control her emotions. Her parents then kindly explain that she has inherited the ability to transform (and contract) into a beast from her honored ancestors, and that, if she can successfully control herself for 30 days, a ritual can be performed which will subjugate the beast permanently.

Bursting with sly sight gags, clever dialogue, and recognizable situations, Turning Red quickly establishes a cheerful tone that remains resolutely positive. The tone is developed based on core relationships with dearly loved ones: Mei Lee and her mother, which is intensely respectful, as well as Mei Lee with her three best friends, which is faithfully supportive.

The film recreates incredibly-detailed backgrounds of Toronto, circa 2002, which means that I must leave any criticisms of such, as far as accuracy and realism, to my colleagues in Canada. The choice of that location as the film's home setting strikes me as an intensely personal decision by Domee Shi, which also fits with the story's (presumed) personal resonance for the filmmaker.

In any event, that and many other choices make Turning Red feel like an indie film, albeit a well-funded animated project that draws upon the resources of hundreds of animators and other creative teams at one of the key animation studios of the past three decades, Pixar. When the story inevitably darkens for serious contemplation of the coming-of-age issues that have been raised, the artistry supports the relentless forward momentum, and delightful surprises never cease.

Playful and perceptive, Turning Red also strikes me as a very funny movie that will reward repeat viewings. It's a beautiful, satisfying experience that makes me glad I somehow survived my teen years with my sanity intact, just so I could more fully appreciate this movie.

Do you feel this content is inappropriate or infringes upon your rights? Click here to report it, or see our DMCA policy.
Disney PlusDomee ShiPixarRosalie ChiangSandra OhTorontoUS