Belgian brothers Harpo and Lenny Guit direct and star in an absurd comedy. 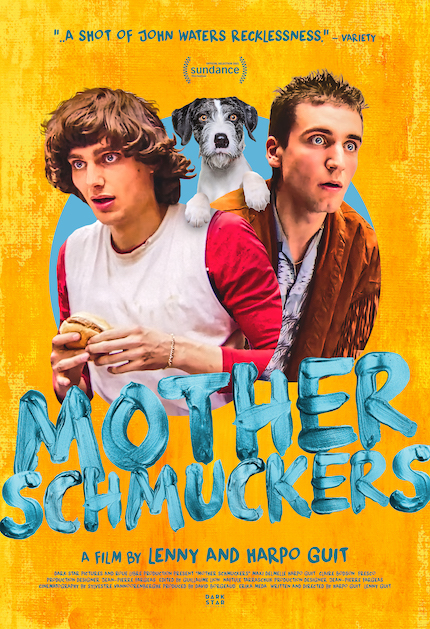 The absurd/dark comedy Mother Schmuckers, the first feature film by Belgian brothers Harpo and Lenny Guit, opens with some idiots cooking in a frying pan what appears to be a piece of shit.

The two idiots, young brothers Issachar (Maxi Delmelle) and Zebulon (Harpo Guit himself), assure that it’s merguez. The stink in the kitchen causes their mother (Claire Bodson) to puke directly into the camera; from the vomit comes the greenish title of the movie.

With a beginning like this one, it’s easy to know what kind of humor this effort deals with, however, Mother Schmuckers reaches completely unexpected places... and, on more than one occasion, fucked-up ones.

This is largely due to the Guits' narrative style. From the moment the mother asks the always hungry siblings to take out for a walk the family's darling – the dog Jacques-Janvier (Fresco), or January Jack in the English translation – Mother Schmuckers becomes one of those films in which something different happens every moment. The clueless brothers barely overcome one problem when they get into another. They jump from minor character to minor character, then unexpectedly reencounter with another one. And if there’s no one else around them, they soon start fighting each other.

The playful and youthful style of the film goes hand in hand with this; it tries to be dynamic by using handheld cameras – even from the dog’s perspective – and with some details in its editing. Issachar and Zebulon's best friend, Choukri (Habib Ben Tanfous), is an amateur magician and filmmaker who always carries a video camera, which ends up joining the various points of view of the film, and usually takes advantage if something striking happens in the street to steal shots in the purest style of guerilla filmmaking (his completed “film" is the post-credits joke).

Mother Schmuckers shares that spirit. It doesn’t have an amateur look but I could bet that the Guits evaded obtaining filming permits; the looks of passers-by at their characters' idiocies give them away.

The plot follows the protagonists after they lose Jacques-Janvier, their mother won’t forgive them and they have to find it no matter what. One of the best gags features the mom angry, not only because they lost the dog, but because they hadn't noticed it until she points it out to them. “We did realize that we lost it, mom, do you think we're stupid?”, the brothers lie.

Absurd humor abounds, based on their idiocy. It’s an example of how the film forgets about the dog, because events never stop. We have, for another example, when the brothers are followed by a policeman (Yannick Renier) for carrying a gun; their mon no longer wants to work as a prostitute and her boss (Chaïda Chaddy Suku Suku) is after her; an obese guy (Tony D’Antonio) has a fixation on the mother; and the aforementioned amateur filmmaker looks for an acquaintance (Tom Adjibi) who could lend him a car to shoot his movie.

It's common to have ups and downs when your narrative is so episodic and riddled with occurrences. Not all gags work the same in Mother Schmuckers. The only consistency is in the Guits' commitment to really dark comedy.

Throughout the running time, such themes as family break-up appear: "I don't know if I love you anymore," says the mother to the protagonists. Little by little they are more affected because this seems to be true. However, Mother Schmuckers always goes for the gag and the absurdly twisted. I laughed a lot, even when it comes to topics like zoophilia (in a hilarious, wacky and satisfying sequence!), the consumption of dog meat, and necrophilia.

Mother Schmuckers is not for everyone. I will be attentive to the Guit brothers, new exponents of absurd and dark comedy to follow.

Review originally published during the Sundance Film Festival in February 2021. The film opens in movie theaters Friday, March 4 and On Demand Tuesday, March 15.

Do you feel this content is inappropriate or infringes upon your rights? Click here to report it, or see our DMCA policy.
BelgiumClaire BodsonHarpo GuitLenny GuitMaxi Delmelle