Cristian Mungiu is an executive producer of a new series from Romania on HBO Max. 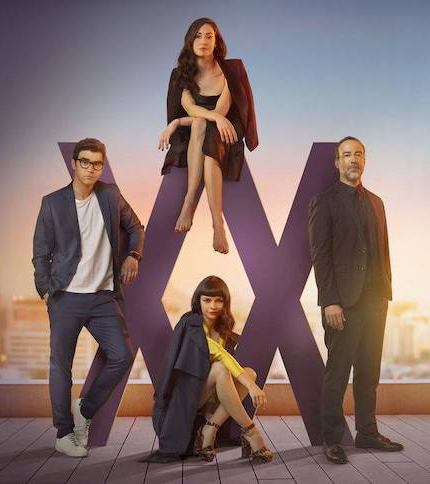 Who wants to be Mayor?

Earlier this week, streaming service HBO Max launched in 15 European countries, including Romania, which is showcased in a new series produced by HBO Europe.

Cristian Mungui (4 Months, 3 Weeks, and 2 Days) serves as one of the executive producers; Vera Ion wrote all eight episodes, the first two of which debuted this week.

Raluca Aprodu stars as Ruxana, who is second in command at a firm that is intent on developing a new mall in downtown Bucharest, Romania. Her boss, Moscu (Serban Pavlu), has determined that backing a strong mayoral candidate will lead to his being able to obtain building permits in the country's largest city, which is already full to the brim with cultural institutions, long-established industries, financial firms, and nearly two million people.

Rux enjoys a close friendship with her younger sister, Cristina (Madalina Craiu), host of a popular daytime television show who loves getting into trouble, yet yearns to become a respected journalist. Their parents are staunchly traditional and thus disapproving of their daughters' modern careers, especially their father, which is why Rux has hesitated to tell them that she is planning an imminent move to the U.S. to be with her longtime boyfriend.

Intent on leaving her homeland forever, Rux's plans change when she learns that her father has a serious health condition. The complications continue the next day when her boss' hand-chosen mayoral candidate suddenly decides to switch political parties. On the spur of the moment, Rux suggests that her boss' wife, a retired (and retiring), if glamorous, former champion ice skater, could be just what they -- and the city -- most need.

The first two episodes also involve a continuing romance between Cristina and her former husband; he manages a large indoor mall, where one of his young employees holds the former ice skater responsible for a past tragedy. It all adds up to a bushel of trouble brewing in the beautiful city of Bucharest.

The show has laid down a lot of trouble for its eight-episode run, to the point that I can't see an easy route to resolve all the plot threads. Perhaps that's intentional, laying the groundwork for future seasons that could more fully explore the individual plot threads.

Even in these first two episodes, though, there are strong nods toward rampant misogyny in the business world that has been institutionalized, and I can't believe that it won't be explored further. The clash between the old, conservative ways and the new, modern methods of doing business, covering the news, and running for political office are also indicators that the show will get into further, ongoing changes to the world order in Romania.

For now, although it's somewhat melodramatic, Ruxx strikes me as a well-made and well-mounted production that has much promise, driven by Raluca Aprodu's quietly confident performance as a modern Romanian woman I want to know better.

Note for viewers in the U.S.: HBO Max makes English-language subtitles available as closed captions, but doesn't make that terribly obvious in its format and layout. Press 'pause' and look for the icon in the lower-right on television monitors.

Do you feel this content is inappropriate or infringes upon your rights? Click here to report it, or see our DMCA policy.
Cristian MungiuHBO EuropeHBO MaxRaluca AproduRomania